"It's a disgrace that you even asked that question, because it's a whole big fat hoax," Trump tells reporters 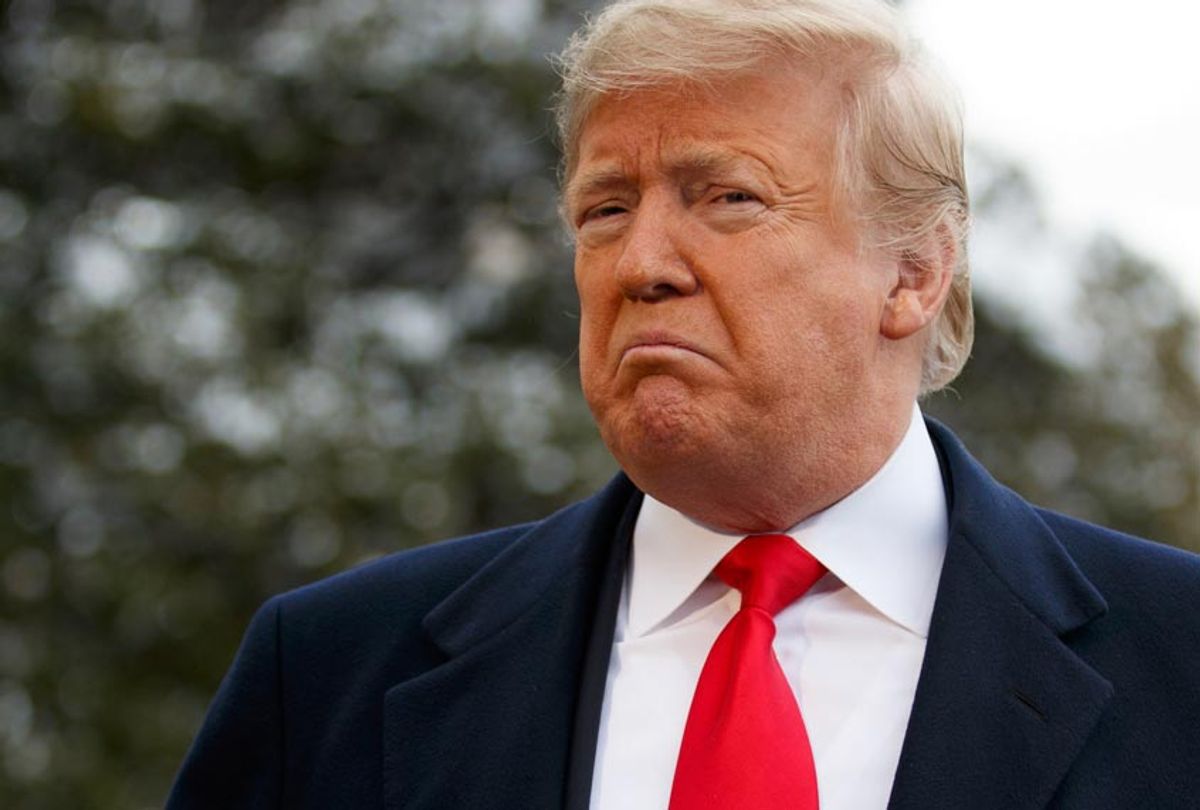 Donald Trump talks with reporters on the South Lawn of the White House before departing for the American Farm Bureau Federation's 100th Annual Convention in New Orleans, Monday, Jan. 14, 2019, in Washington. (AP/Evan Vucci)
--

President Donald Trump on Monday denied that he worked for Russia, blasting the FBI officials who launched a counterintelligence investigation into whether he was working at the behest of Russia "known scoundrels" and "dirty cops."

Trump's comments to reporters as he left the White House came after the New York Times reported that FBI officials launched a counterintelligence investigation into whether Trump was secretly "working on behalf of Russia against American interests." The Times reported that, although Comey's dismissal prompted the inquiry, the FBI had considered launching an investigation into whether Trump was working on behalf of Russia even before he fired its former director "but held off on opening an investigation into him . . . in part because they were uncertain how to proceed with an inquiry of such sensitivity and magnitude."

Robert Mueller took over the counterintelligence aspect of the probe when he was appointed as special counsel in the Justice Department's broader investigation of Russian interference in the 2016 election – and if any of Trump's associates conspired with foreign agents, the Times reported. It is unclear if Mueller is still pursuing the counterintelligence aspect of the inquiry, the newspaper added. However, Mueller is also probing whether Trump's firing of Comey constituted obstruction of justice. Trump has repeatedly dismissed the investigation as a politically-motivated "witch hunt."

CNN confirmed the Times' report that the FBI had considered launching an inquiry into whether Trump was working at the behest of Russia even before he fired Comey. According to the news network, former FBI lawyer Lisa Page testified, "This case had been a topic of discussion for some time. The 'waiting on' was an indecision and a cautiousness on the part of the bureau with respect to what to do and whether there was sufficient predication to open."

It has previously been reported that Peter Strzok, the former FBI agent who was fired after sending anti-Trump texts, told Page – with whom he was linked romantically – in a message following Comey's dismissal that the FBI needed "to open the case we've been waiting on while Andy is acting," referring to the former acting FBI director Andrew McCabe.

In a Saturday tweet storm, the president attacked Page, Comey, McCabe, Strzok and Page, slamming them as "losers."

"Lyin' James Comey, Andrew McCabe, Peter S and his lover, agent Lisa Page, & more, all disgraced and/or fired and caught in the act," Trump wrote. ":These are just some of the losers that tried to do a number on your President. Part of the Witch Hunt. Remember the 'insurance policy?' This is it!"