Trump wants to pull U.S. out of NATO: NYT

Donald Trump has discussed pulling the United States out of NATO... which would help Russia 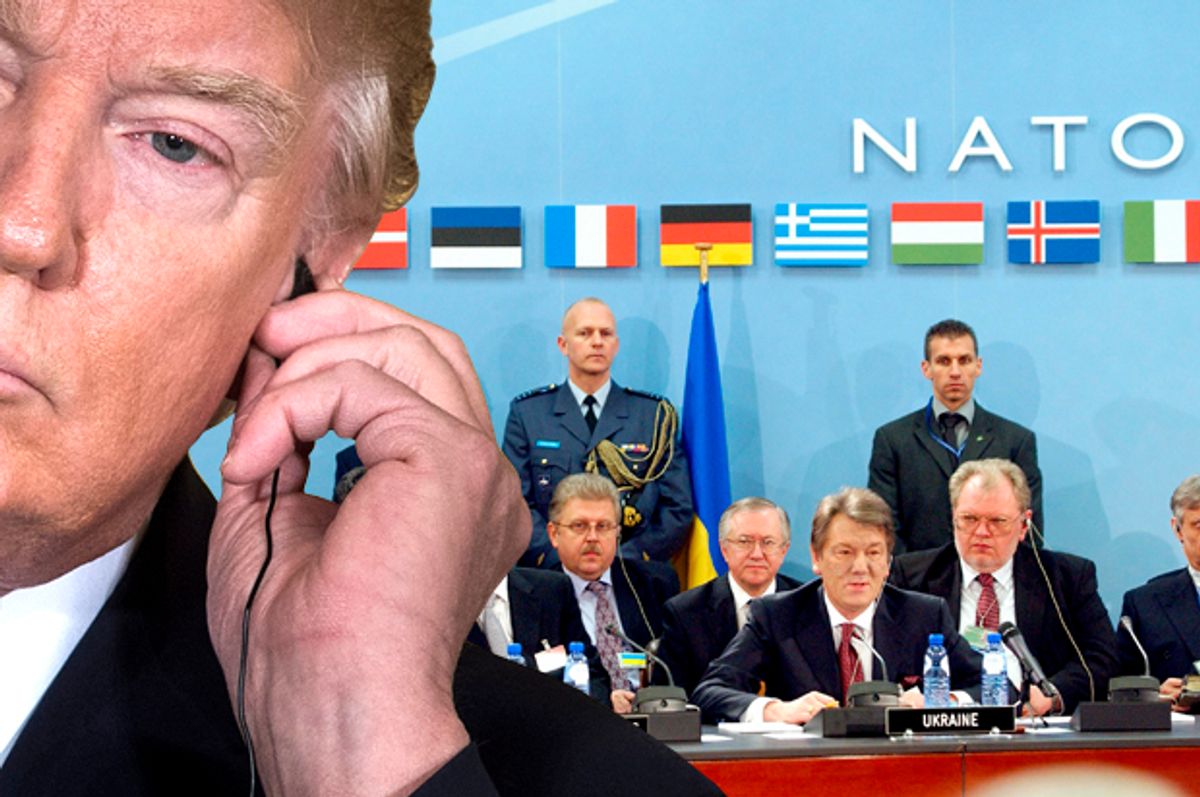 President Donald Trump has discussed pulling the United States out of NATO — a move that, if executed, would diminish America's world stature and embolden Russia to make advances against Europe, according to a new New York Times report.

"Senior administration officials told The New York Times that several times over the course of 2018, Mr. Trump privately said he wanted to withdraw from the North Atlantic Treaty Organization," the paper reported on Monday.

Current and former officials who support the alliance said they feared Mr. Trump could return to his threat as allied military spending continued to lag behind the goals the president had set.

The article described Trump's opposition to NATO as a "core belief," one that he has returned to of his own volition on a number of occasions despite repeated attempts by members of his administration to explain the organization's importance to national security. The report also detailed how Trump had alienated NATO members during his meetings with them, demanding that they pay a greater share to the cost of security and betraying ignorance about how those costs are allocated (for instance, he seemed unaware of the fact that individual nations' parliaments have to establish spending levels).

NATO members' concerns have been particularly aroused by the resignation of Secretary of Defense James Mattis, who was viewed as a foreign policy pragmatist and thus a supporter of the NATO mission. Those concerns have been further inflamed by recent reports that Trump has concealed records of his private conversations with Russian President Vladimir Putin from members of his own administration.

If America were to withdraw from NATO, Putin would be the primary beneficiary. The organization, which has been in place since 1949, was founded to counter aggression from Russia (then the Soviet Union) against Europe. Given Russia's invasions of Georgia and Ukraine over the past decade, as well as its attacks on democratic institutions in the United States, there is little reason to believe that Putin wouldn't be emboldened toward aggression if America withdrew from NATO and thereby dealt it a fatal blow.

"Whether he aspires for Russia to be the world's lone superpower, I don't think he actually has that big an ambition," Michael McFaul, a former ambassador to Russia under President Barack Obama and a man who Trump volunteered to turn over to Putin for interrogation at the controversial Helsinki summit last July, told Salon last month. "I think he just wants to weaken the West, and then after if everything worked out the way he liked – that we are just a collection of nation states – he will then forge bilateral relationships with Germany, with the UK, with United States, and with China. Which is to say that I think he's sober enough about Russia's potential in the next couple of decades to understand that in that world China would be first among equals. Key to his concept is that there would be several equals. It would become a multipolar world as opposed to a unipolar or bipolar world dominated by the United States and China."

McFaul later added, "Well, Putin, to use an old Soviet word/phrase, believes that the correlation of forces are on his side and that the moment for American uni-polarity hegemonic power in the world is changing. I think he feels pretty good about the trajectory of history."