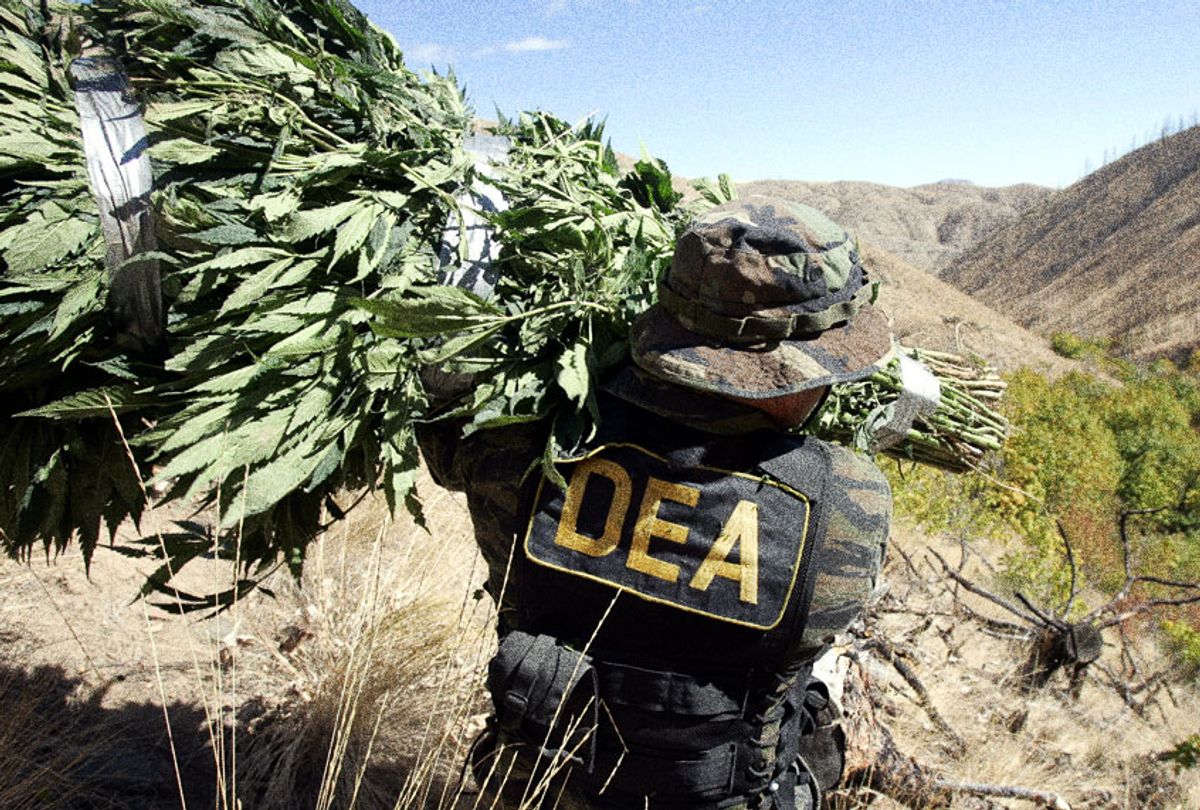 Marijuana legalization has always had its opponents — including the alcohol lobby, which wants to protect its monopoly on legal intoxicants, and the prison-industrial complex, which fears a decrease in the number of nonviolent drug offenders who keep jail cells full. Now the reactionaries have another champion athwart history: former New York Times journalist Alex Berenson. 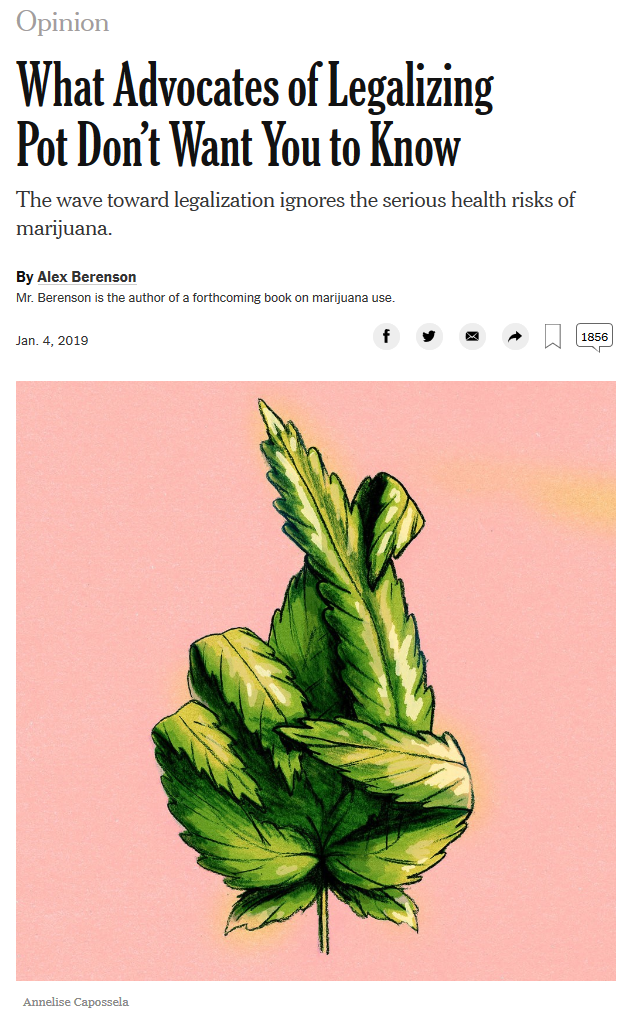 In a pair of op-eds in the New York Times (1/4/19) and the Wall Street Journal (1/4/19) promoting his new anti-marijuana book "Tell Your Children: The Truth About Marijuana, Mental Illness and Violence," Berenson — whose main literary success has been authorship of War on Terror fiction thrillers — flipped the news on its head. Legalization advocates, whom he calls corporate campaigners aiming to set up new businesses for profit, have sold the American people a false image of a perfect and absolutely safe product, and states are taking their cue from them and no one else.

Berenson’s insistence that marijuana is linked to mental illness and violent behavior, as well as to the use of more dangerous drugs, comes with spritely portrayals of pot users who have also committed heinous crimes — “who’d cut up his grandmother or set fire to his apartment.” In Mother Jones (1/5/19), reporter Stephanie Mencimer conveys Berenson’s research with a tidbit about British colonial officials who chalked up a fifth of mental patients in Raj-era India as victims of pot-related injury. (Pot-smoking led to “at least one beheading” — if one trusts the public-health expertise of 19th-century colonial occupiers, as Berenson seems to.)

Jesse Singal in New York magazine (1/7/19) noted that Berenson’s claims about pot-provoked violence are grounded in egregious cherry-picking. His Times op-ed asserts, “The first four states to legalize — Alaska, Colorado, Oregon and Washington — have seen sharp increases in murders and aggravated assaults since 2014.” But as drug policy expert Mark Kleiman told Singal, “Nothing interesting happened with regard to pot in 2014” — it’s just a low point in the national homicide rate that can be used to create the illusion of a meaningful uptick.

More systematic attempts to look at violence rates in conjunction with changes in marijuana laws don’t seem to back up Berenson’s alarmism. A study in the Economic Journal (9/6/17) found that “when a state on the Mexican border legalized medical use of the drug, violent crime fell by 13 percent on average,” according to a write-up in the Guardian (1/13/18). A paper in the Journal of Drug Issues (1/13/16) likewise found “no evidence of negative spillover effects from medical marijuana laws (MMLs) on violent or property crime,” but rather “significant drops in rates of violent crime associated with state MMLs.”

In short, Berenson is good at cherry-picking a few crazy examples of where pot use has been linked to violence, with questionable evidence. In light of the mountain of evidence linking the legal drug alcohol to violence on a much grander scale, we have to ask: What is Berenson’s point, other than to denounce a peaceful transition to legal and regulated drug consumption?

Paul Arementano, deputy director of the National Organization for the Reform of Marijuana Law, challenged Berenson’s assertions about a clear-cut link between marijuana use and schizophrenia. He said in an email:

Indeed, people with schizophrenia smoke tobacco at double or triple the rate of the public at large — but this provokes a debate over whether a craving for nicotine is a side effect of psychiatric symptoms, or whether the elevated use might mean patients actually find it helpful in self-medicating schizophrenia (World Journal of Psychiatry, 3/22/15), rather than an automatic assumption that correlation implies causality.

Arementano also takes issue with Berenson’s dismissal of the medical value of marijuana:

His claims with regard to a supposed lack of established therapeutic efficacy also lack merit, as the cannabis plant is recognized by statute as a medicine in a majority of US states and various compounds of the plant are approved in FDA-marketed medicines. A recent review of FDA-approved clinical trials assessing the safety and efficacy of whole-plant cannabis in various patient populations determined: “Based on evidence currently available the Schedule I classification is not tenable; it is not accurate that cannabis has no medical value, or that information on safety is lacking.”

As for Berenson’s point about corporate campaigners, there is a completely valid set of questions for those genuinely concerned about racial justice: how white entrepreneurs are poised to make millions while black and brown people remain in jail. Some states are insisting any profiteering be paired with release, but there is still painful irony in seeing former Republican House Speaker John Boehner flacking for corporate marijuana growers (New York Times, 4/19/18) while nearly 80 percent of people still in prison on federal drug offenses are black or Latino, according to the Drug Policy Alliance.  However, this injustice is not Berenson’s concern. 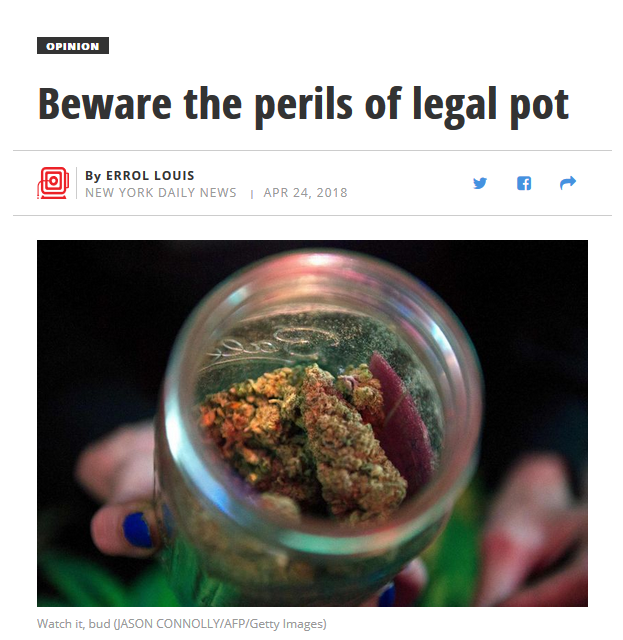 Berenson’s cannabis alarm-raising is not a new genre. In New York, Inside City Hall host Errol Louis (Daily News, 4/24/18) has warned against the “perils of legal pot,” and the New York Post (12/30/18) promoted the press-savvy former New York Police Commissioner Bill Bratton’s view that legalizing marijuana would be “opening up Pandora’s box.” Berenson is taking it to a wider, national level. Says Alex Vitale, author of "The End of Policing":

The backlash is driven in part because a whole generation of neoconservatives have rested their ideology on the idea that all the problems in the world are the result of unregulated individualism, and anything that loosens people’s freedom around drugs, sexuality, gender and race is going to unleash a Pandora’s Box of more relativism. They want to fight the marijuana legalization battle because it could lead to further progressive social reforms.

Despite Berenson’s fear-stoking, he claims that he is no prohibitionist, but rather believes in some sort of half-measure by keeping it unlawful while reducing the penalties: “If arrests for marijuana possession are a major racial justice concern, the solution is decriminalizing possession, turning it into a violation equivalent to littering,” he wrote in his Times op-ed:

But advocacy groups don’t view decriminalization as an acceptable compromise. They want full legalization, making marijuana a state-regulated and -taxed drug that businesses can sell and profit from.

But it isn’t simply jail that black people fear in the drug war. Philando Castile was murdered by a police officer who claimed to have smelled marijuana smoke in his car during a traffic stop, and countless other black men who have become martyrs in the Black Lives Matter movement were initially accused of petty “quality of life” infractions. (Eric Garner was choked to death on the street because he was accused of selling “loose” cigarettes.) Berenson seems oblivious to the danger posed by anything that incentivizes interaction between cops and communities of color.

And as Vitale noted, even things like fines and penalties fall more harshly on those who can least afford them — to say nothing of the way guilty pleas for petty crimes can be used against individuals later on in their lives. Kristian Williams, author of "Our Enemies in Blue," told FAIR:

Decriminalization would be a happy medium for white college kids, but not for everyone else. It’s not unusual for traffic violations to become a chance for the police to stop, question and search, and often arrest, people of color more disproportionately than white people. Once the pretext for the stop is there, there is a lot of discretion left to the officer.

In New York City, for example, which has ostensibly already undergone decriminalization, racial injustice endures. As the Daily News (1/8/19) reported, “In all, 89 percent of all new Yorkers arrested for smoking marijuana last year through November 23 were either black or Hispanic.” 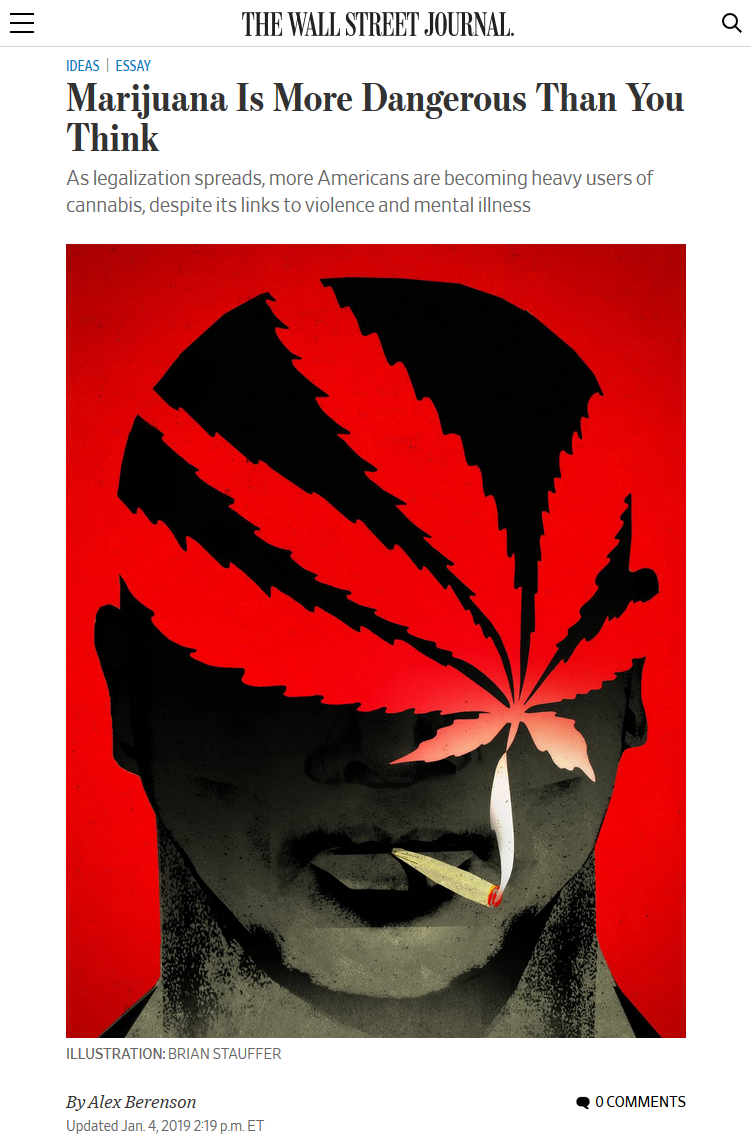 Berenson falls into a familiar trap of conceiving that the only way society can confront a public health concern is through some sort of criminalization, a symptom of our neoliberal hegemony — overlooking how many advocates for legalization actually do want the marijuana industry to be regulated, taxed and unionized. Of course, like any psychoactive substance, marijuana use has both positive and negative effects, all of which should be studied and monitored — which is also true about wine, butter or the vast majority of prescription drugs we take. A normal, functioning industrial state would regulate these things through the appropriate channels, like food and drug rules, environmental agencies and the like.

But the erosion of the social safety net since the rise of Reaganism coincided with the intense militarization of policing in the War on Drugs, creating a world where the state is only strong when it’s punishing rather than protecting the public at large, with the latter seen as a socialist boondoggle. Berenson’s attachment to this Cold War logic suggests he has failed to demilitarize his mind.

The fact is, Berenson’s alarms actually make the case for full legalization. “With legalization,” said Vitale,

people know what they’re getting and it generates tax revenues for economic programs that replace the black market drug economy. You reduce the kind of organized criminality in the whole process. There still remains a lot of grossly inaccurate hysteria of any potential harms of marijuana, but even if there are secondary risks, those risks are much smaller than those of all kinds of legal activity.

What’s good enough for alcohol — which is linked to domestic violence, vehicular fatalities and liver disease — is good enough for marijuana. But that logic probably wouldn’t have landed Berenson a book deal.