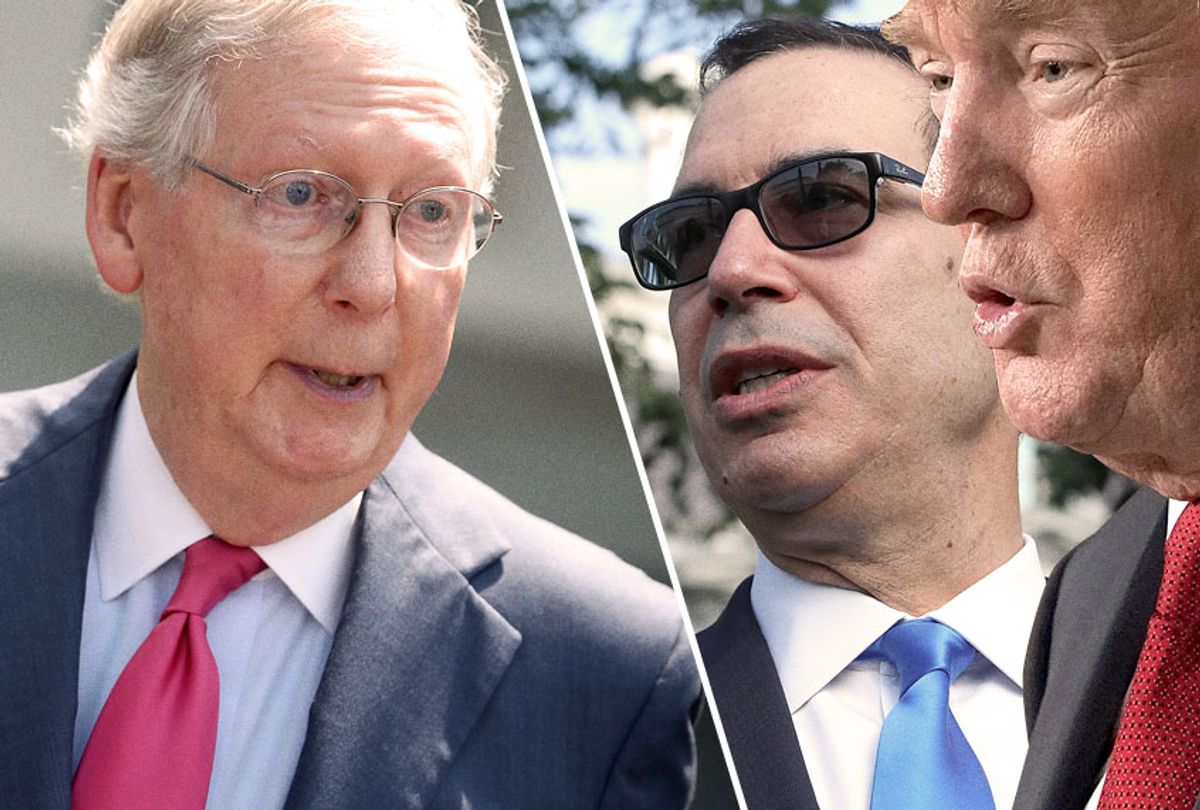 President Donald Trump lost the support of 11 Senate Republicans on Tuesday after he tried to relax sanctions against Russian oligarch Oleg Deripaska.

In a 57 to 42 vote to proceed to a resolution proposed by Senate Minority Leader Chuck Schumer which would reverse a decision by Trump's Treasury Department to loosen the sanctions, a number of key Republican senators broke from the party line and sided with Senate Democrats, according to CNN. These included Sens. Susan Collins of Maine, Tom Cotton of Arkansas, Cory Gardner of Colorado, Josh Hawley of Missouri, John Kennedy of Louisiana, Martha McSally of Arizona and Marco Rubio of Florida, all of whom have attempted to take a tougher stance against Russia despite the president's comparatively more pro-Russia tone.

"I do disapprove of the easing of the sanctions because I think it sends the wrong message to Russia and to the oligarch — a close ally of Mr. Putin, Oleg Deripaska — who will in my judgment continue to maintain considerable control under the Treasury's plan," Collins told reporters after casting her vote.

By contrast, Sen. John Cornyn, R-Texas, voted against the measure and expressed relief that there weren't enough Republican defections to bring it to 60 votes. "I don't know exactly what's going to happen but as long as there are not 60 votes to conclude it, maybe that will force a negotiation on having a markup on tougher legislation in the Banking Committee and Foreign Relations Committee," Cornyn told CNN.

He added, "There are some legitimate concerns about whether the sanctions regime is tough enough to hold people like Oleg Deripaska from basically retaining control over this company."

Republican Senate Majority Leader Mitch McConnell, R-Ky., backed the Trump administration's move but was rebuffed by members of his own caucus on Tuesday. McConnell set up another procedural vote to table the resolution on Wednesday. The vote, set for 12:30 p.m. ET, needs 60 votes to pass, which is unlikely to happen given the Republican resistance.

At the time that it decided to relieve sanctions on Deripaska, the Treasury Department issued a statement arguing that its new policies toward Deripaska did not constitute lifting sanctions.

"Treasury sanctioned these companies because of their ownership and control by sanctioned Russian oligarch Oleg Deripaska, not for the conduct of the companies themselves. These companies have committed to significantly diminish Deripaska’s ownership and sever his control. The companies will be subject to ongoing compliance and will face severe consequences if they fail to comply. OFAC maintains the ability under the terms of the agreement to have unprecedented levels of transparency into operations," Mnuchin said in the statement.

In one sense, the Treasury Department's policy toward Deripaska is in sharp contrast to the Trump administration's broader hard-line stance against Russia. Although the president himself has been notoriously favorable in his public statements about Russia, his administration has often managed to stay consistent with the policies implemented by its predecessors.

"I want to say it is extremely unusual. I can’t think of another case with any president, with any bilateral relationship, where you have just this giant gap between the administration’s policy and the president himself. It’s extraordinary," Michael McFaul, the former ambassador to Russia under President Barack Obama, told Salon in June. "Time and time again we get new evidence to underscore the fact, right, including just recently when the president suggested that Russia should join the G7. To the best of my knowledge, that was not a policy that was discussed and treated and chewed on in the White House situation room: Does that make a policy recommendation for the president?"