America has its gunsights on Venezuela

Despite 10 years of governance by the socialist forces, the Venezuelan oligarchy remains firmly intact 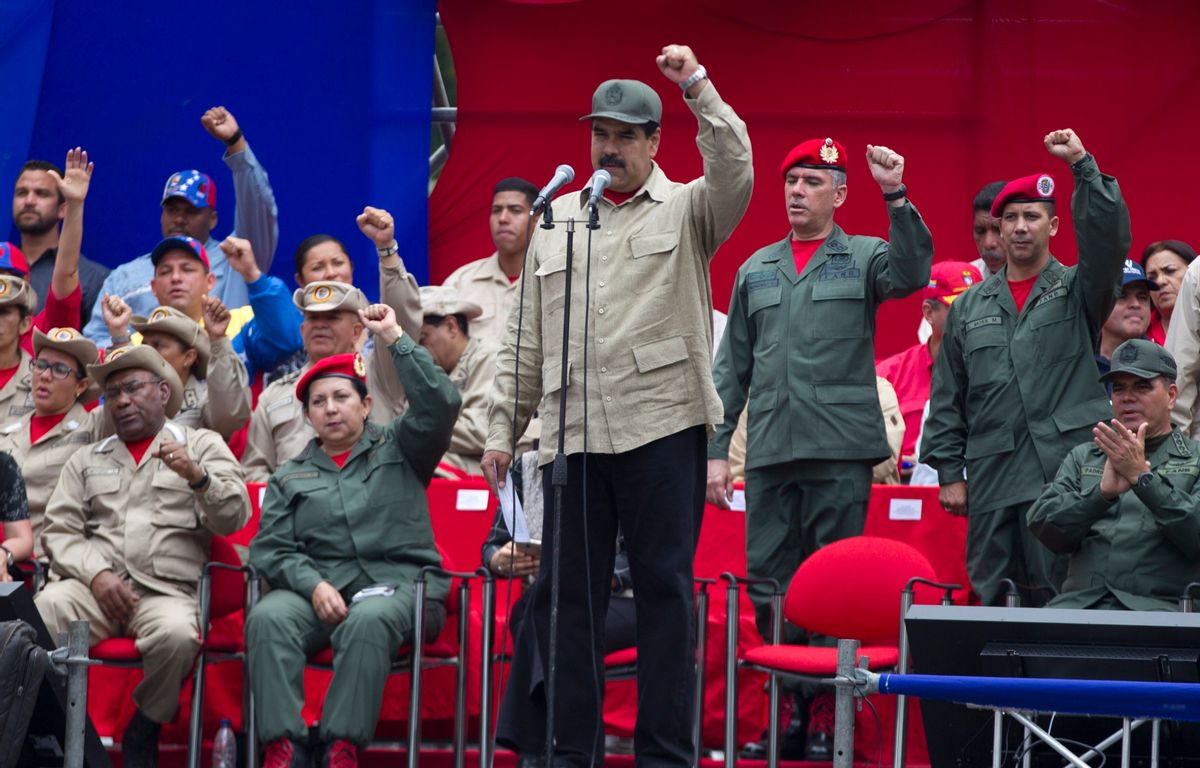 Venezuela's President Nicolas Maduro, center, leads the seventh anniversary celebration of the Bolivarian Militia, in front of the Miraflores presidential palace in Caracas, Venezuela, Monday, April 17, 2017. Officially known as the Venezuelan National Bolivarian Militia, it is a branch of the National Armed Forces of Venezuela created by the late President Hugo Chavez. The anniversary celebration took place with unrest spreading in Venezuela as confrontations between opposition demonstrators and authorities continue. (AP Photo/Ariana Cubillos) (AP)
--

Last Thursday — on January 10 — Nicolas Maduro was sworn in for his second term as president of Venezuela. “I tell the people,” Maduro said, “this presidential sash is yours. The power of this sash is yours. It does not belong to the oligarchy or to imperialism. It belongs to the sovereign people of Venezuela.”

Despite 10 years of governance by the socialist forces — first led by Hugo Chavez and now by Maduro — the Venezuelan oligarchy remains firmly intact. It dominates large sections of the economy, holds immense amounts of the country’s social wealth and controls the main media outlets. A walk through the Altamira neighborhood in eastern Caracas is sufficient to gauge the resilience of the wealthy, most of whom have homes in Spain and in Florida as well. Pelucones is the name used to define them — bigwigs, a term with aristocratic connotations. They have resisted all attempts by the socialist Bolivarian movement to expand political and economic democracy in the country.

This oligarchy, through its media, controls the political and social narrative, defining the nature of Venezuela’s crisis to its advantage. For this small sliver of the population, all of Venezuela’s serious problems are blamed on the Maduro movement. None of the problems are laid on the doorstep of their long domination of Venezuela nor do they cast an eye at the United States, which has tried to suffocate the Bolivarian revolution since 1999.

Imperialism is a word that is rarely used these days. It is relegated to histories of colonialism in the distant past. There is little understanding of the suffocating way that financial firms and multinational businesses drive their agenda against the development aspirations of the poorer nations. There is even less understanding about the muscular attitude of countries such as the United States, Canada and the Europeans against states that they deem to be a problem.

The gunsights were once firmly on West Asia and North Africa—on Iraq, Libya, Syria and Iran—but now they are focused on Latin America—on Cuba, Nicaragua and Venezuela. These countries face economic sanctions and embargoes, threats of annihilation, covert operations and war. The definition of imperialism is simple: if you don’t do what we tell you to do, we’ll destroy you.

Pressure on Venezuela has been intense. U.S. President Donald Trump has repeatedly called for the overthrow of the Bolivarian government, led by Maduro. Sanctions have been ratcheted up. Economic warfare has become normal. Threats of a military invasion are in the air.

On January 4, the Lima Group of 13 Latin American governments and Canada said that it would not recognize Maduro as the president of Venezuela. Behind them sits the U.S. State Department, which has put pressure along the hemisphere for the isolation of Venezuela as well as Cuba and Nicaragua. The U.S. State Department characterized the inauguration of the new president as “Maduro’s illegitimate usurpation of power.” Diplomatic language has dissolved into this kind of crudity.

The Lima Group was set up for one reason: to overthrow the current government of Venezuela. It has no other purpose. Sanctions and diplomatic withdrawals are part of the Lima Group’s arsenal. Buoyed by the election of far right-wing politicians such as Brazil’s Jair Bolsonaro and enthused by the fulminations of Trump, the Lima Group has tightened the pressure.

Argentina’s Mauricio Macri went to Brasilia to meet Bolsonaro, where he condemned the “dictatorship” of Maduro, and accused him — personally — of being responsible for the difficulties in Venezuela. This is harsh language, rhetoric that sets in motion a dangerous push toward regime change in Venezuela.

When U.S. ambassador to the United Nations Nikki Haley tried to draw the UN Security Council into such language — of dictatorships and regime change — she was rebuffed by the other members. In November 2017, for instance, Bolivia, China, Egypt and Russia boycotted an informal meeting called by Haley. No other such meeting has been possible. There is worry that the Trump administration will attempt in Venezuela what the Obama administration conducted in Honduras, or worse, what the Bush administration conducted in Iraq.

Maduro was not permitted to take his oath in the National Assembly. He was blocked by Juan Guaidó, leader of the opposition. That is why Maduro took his oath in the Supreme Court, a procedure that is validated by the Constitution.

Strikingly, the head of the Organization of American States — the Uruguayan politician Luis Almagro — sent out a tweet that welcomed Juan Guaidó as the president. Guaidó, to his credit, had not claimed the presidency. It was, instead, a foreign official from a regional body that has superseded the Venezuelan people and attempted to install a new president in Caracas.

More chilling has been the words from the U.S. Secretary of State Mike Pompeo and his department. Pompeo, in a tweet, wrote, “The time is NOW for a return to democracy in Venezuela.” The word “now” — in capitals — suggests that Pompeo is clear that there needs to be no procedures, only a coup. The day after this tweet, Pompeo’s department said, “It’s time to begin the orderly transition to a new government.” One does not need to read between the lines to know that this is a call for regime change, for a coup, and that it comes from Washington, D.C.

Trump’s national security adviser — John Bolton — coined the phrase “troika of tyranny” that includes Cuba, Nicaragua and Venezuela. It is plain as day that the United States wants to overthrow the governments in each of these countries, and perhaps Bolivia as well. These are dangerous portents.

Those troops that Trump is withdrawing from Syria might not be going home anytime soon. They might find themselves deployed soon enough on the beaches of Punto Fijo, facing a Bay of Pigs style resistance from the Chavistas.