What bad choices are left for Theresa May after the devastating Brexit defeat?

Confused by what just happened with Brexit and what happens next? You're not alone. Here's the way forward 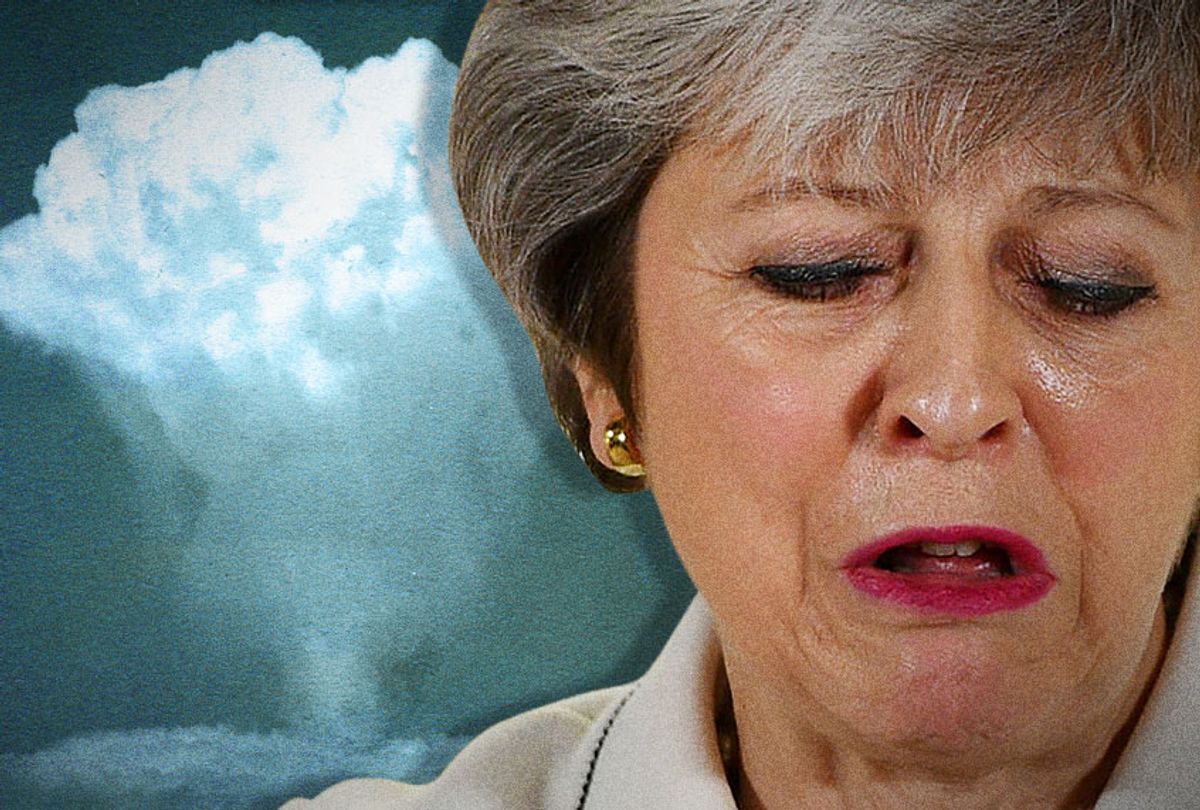 At 7pm Tuesday night in London, UK Prime Minister Theresa May lost a 432-202 vote in the House of Commons, on the Brexit deal she had personally negotiated. 118 MPs from her Conservative party voted against her, sending her to the worst defeat of any Prime Minister in Britain’s modern era and the worst rebellion in the history of the Conservative Party. May had curated this deal with her Conservative colleagues and negotiated it with the EU, but Britain has never seen a governmental failure of this magnitude, on a policy issue of such import. Tuesday night was Theresa May’s most ignominious hour.

This extraordinary event has three consequences. First, on a policy level, Britain’s parliament has rejected the proposed agreement to exit the EU, so it is unclear what will follow. Second, the defeat was so unequivocal that the current agreement cannot be brought back for another vote. Third, this vote spelled the end of Theresa May’s political career. Though she  beat back a vote of no confidence on Wednesday by 19 votes, she won simply because her Brexiteering colleagues who hate her deal fear Labour leader Jeremy Corbyn more.

Next Monday, May is required to offer an alternative policy to her defeated plan. Whatever she presents will likely be irrelevant, as Theresa May is no longer truly in charge of Britain, Brexit, or the Conservative Party. As with President Trump and the 2018 Midterm elections, after the vote May still holds the office but is shorn of a good deal of her power.

There are now only three possible outcomes: Brexit with a modified deal, a no deal Brexit, or no Brexit. Sadly, every side assumes that they will now obtain their preferred result. Theresa May believes that, as March 29th (Britain’s formal EU Exit Day) draws close, recalcitrant MPs will reluctantly choose a flawed deal she will offer over no deal at all. Her concerns are economic, as a no deal Brexit would cost Britain an estimated 9.3 percent of its GDP and 750,000 jobs, or 2.5 percent of all jobs in the country. But Brexiteers firmly hold that, if they can run out the clock, the resulting no deal Brexit will liberate Britain from Europe’s contaminating clutches and return her to a state of grace, no matter the cost. Finally, the Remainers see May’s defenestration as a clear path to a second referendum, to undo the damage of the 2016 referendum. No side is giving ground, as all see victory nearly within their grasp.

To be fair, this catastrophe is not solely May’s fault, it is simply the moment when the long chain of manipulations, misjudgments, and wishful thinking crashed into reality.

Tuesday’s vote was the culmination of three poisoned and sulphurous elements; first, the actions of an extremist anti-European wing of the Conservative party, bent on Making Britain Great Again, preferring an atavistic revolution to a realistic future; second, a series of cynical manipulations by David Cameron and other senior Conservative leaders, who traded their party’s tradition of responsible government for tainted electoral success; and third, the Labour Party’s repeated inability to successfully challenge the Conservative Party as a credible and persuasive governing party.

These three threads wound together in the 2015 general election. The unexpected popularity of the UK Independence Party prompted Conservative Prime Minister David Cameron to offer a devil’s deal of a Brexit referendum to his party’s anti-EU flank if he won reelection. Cameron’s cynical overture to improve his party’s electoral prospects was the original sin of Brexit, and its potentially cataclysmic consequences grew in significance when Labour failed to break Cameron’s fragile hold on power. Once reelected in 2015, Cameron reluctantly set the date for the vote and though he attempted to undo his ill work, the new Labour leader and EU skeptic Jeremy Corbyn refused to collaborate on the Remain effort, while the passionate Brexiteers treated the vote as a holy mission. The rest, as they say, made history.

Since that time, extreme anti-Europeans have driven Conservative policy on Europe and brought things to this point. Their passion was unquenchable: they wanted out of Europe, so that Britain could return to its prelapsarian glory. Theresa May, originally a Remainer, unsuccessfully attempted to placate them to maintain her hold on power, but no deal she might craft could match the leap of faith they demanded. For his part, Jeremy Corbyn never provided a sufficient governing alternative or even a clarion voice to remain in the EU, choices for which he, his party, and the country continue to pay.

It seems increasingly likely that Britain may reconsider the entire Brexit concept, with a real possibility that it might be rolled back in some form, either with a second referendum or a soft Brexit, such as a Norway Plus relationship.  This decision, however, will not be Theresa May’s, rather it will involve actors previously excluded from this process. Ironically, Jeremy Corbyn may now influence the outcome more than May, as he is not politically beholden as she is to anti-EU forces. Corbyn could either actively create or passively allow pro-EU Labour members to join a cross-party coalition with moderate Conservatives to accept a soft Brexit or even a second referendum.  That said, Corbyn is no fan of Brussels and his proffering the no confidence vote and the subsequent musings that another one may be coming demonstrates his strong and unsurprising preference for a general election over a second referendum.

While new British players may finally become involved to resolve this crisis, a successful British revolution (in the classical sense of coming full circle) over Europe will depend on more than Britain alone.  The EU will have to unanimously support Britain’s return to the fold in whatever form it might take. While Brussels’ patience is clearly wearing thin, Britain’s case for leniency is persuasive as it brings a great deal to the European table. Britain remains the EU’s second largest economy and home of Europe’s financial capital, in 2017 it was a net contributor to the EU budget of £8.9 billion ($11.5 billion), and has a centuries-long commitment to the rule of law, a useful trait as some Eastern European EU members are currently flirting with authoritarianism. A Brussels-blessed extension of Article 50 (when Britain formally leaves the EU) grows more likely by the day under any circumstances and if the European Commission could put up with an infamously belligerent Margaret Thatcher in the 1980s, the EU can certainly cope with whichever British leader will now emerge from the smoke.

This process has revealed a surprising similarity between the UK and the US, where emotion and ideology have driven some of the most weighty recent policy decisions. The Conservative Party’s passionate attachment to Brexit is mirrored by the US Republican Party’s absolute commitment to repealing Obamacare. Both positions are driven by ideology rather than substantive policy analysis, explaining their attachments in social and moral terms rather than cost-benefit analyses (which is ironic, given that both parties are ostensibly the parties of business). Both won elections by focusing on these issues and both eventually succeeded in their larger goal, with Conservatives winning the referendum and Republicans winning a recent court case in Texas to repeal Obamacare. And both now confront fundamental existential crises as a result of their attachments to these shibboleths, which have split their ranks, alienated large swaths of their populations, and threaten the very futures of their parties.

There are also deep generational and identity similarities in the Conservative and Republican parties, where the divergence over Brexit between an older, more white demographic and a younger, more multicultural group mirrored President Trump’s 2016 victory, where a similarly older, more white, rural and homogeneous demographic opposed a younger, more urban, and heterogeneous assemblage. Generational damage is being done to both countries, as young Britons will no longer be able to easily work and trade in the EU, while millions of young Americans are being denied health coverage or are under threat of losing it because of Republican efforts to dismantle Obamacare.

It is too soon to tell what shall follow Tuesday’s vote, as the only two constants of Brexit have been its irrationality and its unpredictability. When the history of Brexit is written and that day is described, neither Theresa May nor David Cameron will be remembered fondly. The iconically English William Shakespeare would often use farce to leaven tragedy; sadly, with Brexit, British life is imitating British art. In truth, Tuesday night was a most ignominious hour for Britain.