"Politically, I can say the characters are not alt-right," filmmaker Henry Dunham tells Salon 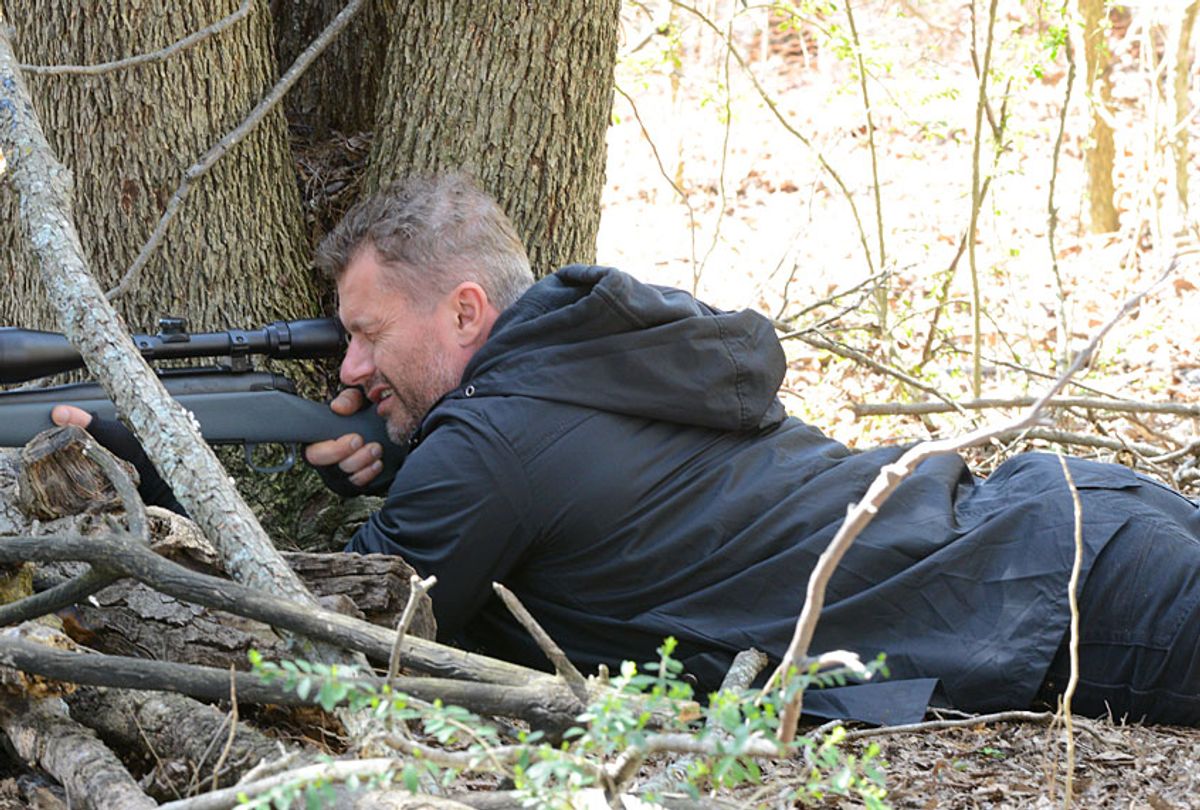 “Standoff at Sparrow Creek” sounds like an action film, but it’s not; it’s a taut, talky drama about seven guys in a Michigan militia who meet up to determine which one of them shot up a cop’s funeral. And it has to be one of the men; the automatic weapon used in the crime belonged to the militia and it is missing from their warehouse. What is more, similar crimes start happening elsewhere that members of the militia do not want to be blamed for — but might be.

Written and directed by Henry Dunham, this intense film has ex-cop Gannon (James Badge Dale) interrogating Morris (Happy Anderson) and the mute Keating (Robert Aramayo) to prove their innocence and ferret out the killer. Meanwhile, Beckmann (Patrick Fischler) is tracking the police and trying to keep the militia’s location secret, and Noah (Brian Geraghty), an undercover cop, is chained to a fence outside.

Dunham subtly — and apolitically — addresses topical themes, from gun rights to white supremacy and corrupt cops, but in an arty manner; the film features minimal violence but drastic lighting that ranges from harsh fluorescents to silhouettes, and strobes. He also coaxes flinty performances from his all-male cast, with Anderson and Aramayo making the strongest impressions as the suspects.

The filmmaker recently spoke with Salon about his  claustrophobic and apolitical new thriller.

“Standoff at Sparrow Creek” is a variation on a locked room mystery. Can you discuss the strategy of containing the drama to almost one space and having seven main characters?

Not to give an uninteresting answer, but I started as a writer, and my main source of inspiration were plays by Tom Stoppard and David Mamet — writers who constructed compelling, interesting dramas in living rooms and tight spaces.

I always wanted to be a writer-director and to be economically respectful, I had to find something inexpensive to shoot. A short I made (“The Awareness”) was about two people talking in a room. This story — I wrote the first draft seven years ago — was always intended to be a thematic exploration of individualism and the cost of being a part of a group. The way to do that was to have guys in a warehouse and have their small actions having a massive ripple effect on the outside world. That is the least expensive thing you can do. I wrote this to be a cousin to the short, so I wasn’t asking a stranger for $35 million, but I was able to get investors for $400,000. It was a combination of what the story needed and what accelerated it getting made.

I looked at “Death and the Maiden” and “The Ox-Bow Incident,” which just features guys talking. There are brilliant turns and emotions and that ending! I wanted to have my audience enjoy that claustrophobia.

The film examines gun culture from the point of view of men who want to exercise their gun rights. These men are hunters. What prompted you to adopt that perspective?

The beginning of this project was the need to tell a story about connectivity and being a part of something. That’s been told a lot — with families, bands, friends, etc., and that was boring to watch. I wanted to make a story about being a part of something, so I set it in a group that I’m not a part of, but am fascinated by — I grew up in Michigan and heard about the militia guys. I write the emotion that I know, not the subject matter or circumstances. It is about: Why am I in this group? Why am I a part of this group? You have empathy, and identify with these characters, and recognize similarities with them you otherwise wouldn’t. Viewers relate to them even though they are in an unrelated circumstance. I like making things uncomfortable.

The violence in the film happens almost entirely off-screen, but there are threats of violence throughout the film. Can you discuss your decision about what to show and what not to show?

I’m a really big fan of contrasts. I don’t like it when characters are being violent in a movie and it’s horrific and shot in a horrific, in-your-face way. If you have someone force feeding someone, and you see the guy’s eyes bulging, it’s gross, and done in a gross way. But for me, it was more powerful to have a beautiful wide angle, back and forth shot of a man force-feeding another man so the feeling of what’s being seen is horrific, but the shot is gorgeous. The Coen Brothers are masters of this. You don’t mind seeing someone being fed into a woodchipper in “Fargo” because the visuals are so compelling. It’s so unexpected in how it’s shot that you don’t mind the violence. I love violence in movies when it’s true, but when they bat you over the head with it, it loses its power. Seeing the monster is never as scary as imagining what it looks it.

Likewise, the film’s lighting and editing are all very arty and deliberate. What decisions did you make regarding the tone and approach to the material?

I’m a nutcase about visuals. If I had any talent in the field, I’d love to be a [director of photography]. The cinematography of “Sparrow Creek” was so important. It’s so contained, the audience needs visual progression. I start out with wide florescent lighting and you can get a sense of the mood, but as the story progresses, the emotions do, too. The characters start to get lit in a chiaroscuro style — but it’s justified. You see half their face and you lose certainty of where they are. When Gannon is in a dark place, you see him lose his place; you have to see his physicality and actions to know where he is.

The film also addresses, by extension, police corruption, white nationalism, and advocates for the killing of cops. “Who doesn’t want that?” one characters states. These are hot-button topics. What’s your agenda?

I don’t have one. I’m politically useless. I wrote the story so long ago that these themes were in the background of society, and as time went on, they became more topical, coincidentally. I need people to know I’m not crazy, but it did allow the film to get made. The [politics] just feel true to the characters. You have to lean into them. The more subliminal and suggested they are, the better. In the beginning, they all are against it, but over the night, as things happen, it becomes a question of how many people do you need to see lose their minds before you lose your own?

The film also addresses themes of loyalty, male vulnerability, sacrifice, and loneliness — which is the subject of a particularly intense exchange. What are your observations about those ideas?

That was the whole genesis of the project. After I finished the short, it got me in the rooms you wanted to get into. I went to a bar in LA and I thought: I did what I wanted to do, and I am still in the same place. I wanted to go home and be left alone and do what I want to do and dig at the stuff that scares me. If it affects me it will affect an audience. If there’s an emotional point of view of a character who wants to be solitary and not to be with others — what’s the most painful thing for them? Then drive them there. They need the group. So that became the story and the arc. Gannon is experiencing something f**ked up, and it drives him out from being alone — which he’s not very good at — to join a militia where he has nothing in common with the guys. He just needs to be there to be with someone else.

The film is part of the Cinestate slate, which has become an upstart distributor that gives its filmmakers creative freedom. What observations do you have about working with that company, which has been developing a reputation for edgy films?

Dallas Sonnier [the founder] is just this badass cowboy who gets movies and knows how to get them made. My script was on the blacklist in LA, and I told my agents, “I’m directing this,” and they introduced me to Dallas and he said, “I’ll give you final cut.” I said, “It’s going to be dark,” and they said, “OK.” He supported me and left me alone to do what I wanted.

Cinestate loves making stuff. [Director S. Craig] Zahler’s material [e.g., “Brawl in Cell Block 99”] is his own thing. I don’t think there could be any better way to get your first movie made than to have people say, “We get it. Go do it.” It was cool of them to support it and not interfere. That’s pretty uncommon. This film wouldn’t exist in the form it exists with anyone else.

Who is this film for?

That’s one of the points in the film. Just because the characters are where they are, and look like they do, people assume. But to see these guys get blame expressed for something they didn’t want is interesting to me. Politically, I can say the characters are not alt-right.

So, one last question, which is one posed by a character in the film: I need to know where you stand?

I think there’s a situation that’s a product more of our time than of the movie itself. If “The Deer Hunter” came out today, I don’t know that we would be ascribing these political sides to the characters. We didn’t do that back then, when things weren’t certain. Can we tell middle America blue-collar stories without diving into anything beyond that?