These 12 businesses are turning sterile, water- and chemical-intensive lawns into food forests 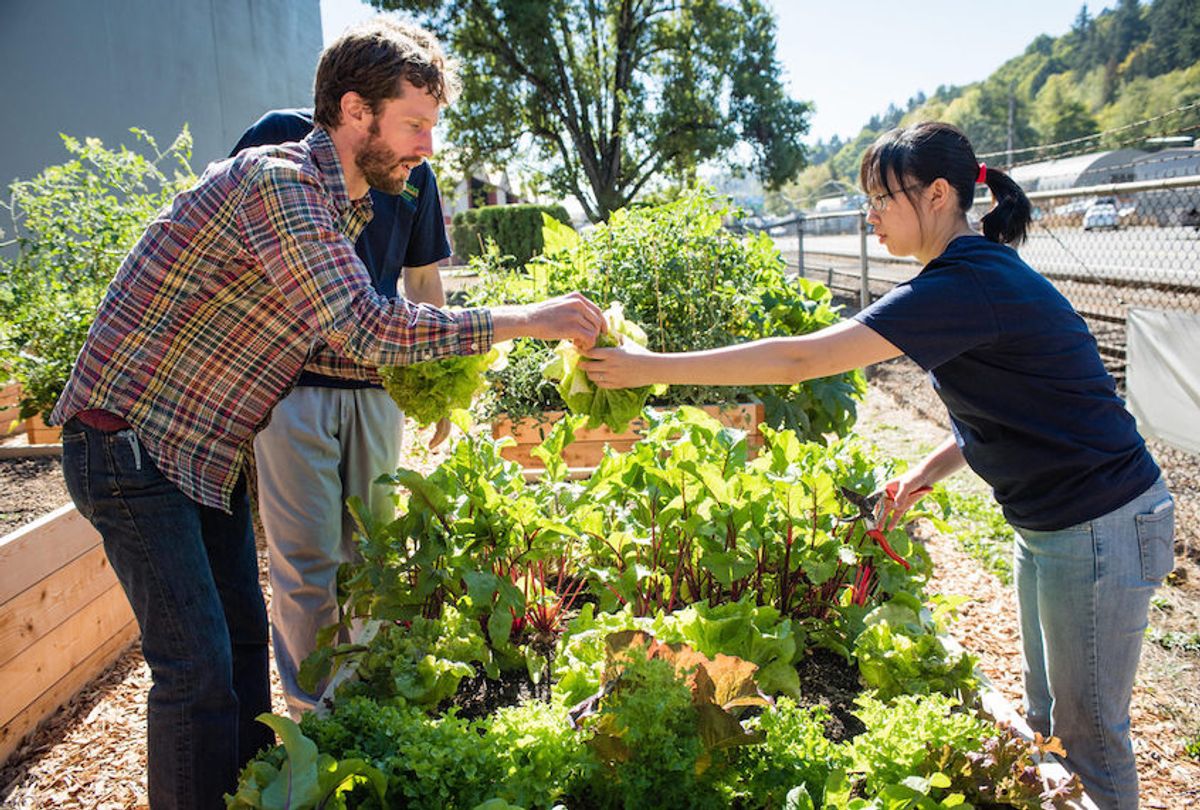 Lawns are ubiquitous in the United States and according to a 2015 NASA study, they take up three times as much space as the next largest irrigated crop, corn. These familiar patches of green require 9 billion gallons of water per day, around 90 million pounds of fertilizers and 75 million pounds of pesticides per year. Plus, the lawnmowers that maintain them largely use gas and emit pollutants. All for a crop we can’t eat.

A growing group of people and businesses are trying to change that. For over a decade, “unlawning,” or the act of turning sterile lawns into fertile, edible landscapes, has been gaining popularity in the United States. These edible yards aren’t just backyard garden plots with a few squash and tomato plants, rather they are landscapes that incorporate edible native plants, like paw paw trees or bush cherries, along with fruit trees, pollinator habitats, medicinal herbs and water features.

One well-known proponent of edible landscapes is Fritz Haeg, an artist who in 2005 began a years-long project called “Edible Estates,” during which time he traveled the country and turned ordinary yards into edible masterpieces. In the years since Haeg’s project, there has been a steady growth in awareness of edible landscapes in the U.S.

“When we began, there was very little ecological literacy,” says Sarah Kelsen, an ecological engineer and co-owner of Land Beyond the Sea, an edible design firm founded in 2010 in Ithaca, New York. But now, she says of ecological awareness and her own business, “It feels like there’s been a completely exponential increase.”

Ben Barkan, an edible landscaper who started HomeHarvest LLC 10 years ago in Boston, has also seen the difference. “Not a lot of people were used to the idea of replacing parts of their lawn or ornamental landscapes with edible landscapes,” Barkan says about the first years of his business. Now, he says, there is more interest and his business has grown a lot.

“The trend toward planting food is on the rise again,” says Fred Meyer, who started his edible landscaping organization, Backyard Abundance, back in 2006. Meyer believes that the chaos and insecurity that the U.S. has been experiencing since the 2008 recession contributed to unlawning’s rising popularity, since people tend to fall back on growing food in times of insecurity.

He likens the trend to that of the Victory Gardens during World War II, which grew an estimated 40 percent of produce consumed in the United States. Today, America grows less than half of its own fruit and just over two-thirds of its fresh vegetables. But home gardening is becoming more popular, with a 2014 studyshowing that one-third of Americans currently grow food at home, an increase of 17 percent from 2008. “I see it continuing as long as things continue to be unpredictable,” Meyer says.

The trend toward turning yards into gardens is a win for biodiversity as well. A recent study published in Landscape and Urban Planning found that lawn maintenance was responsible for a lack of biodiversity in sites around major cities like Baltimore, Boston, Miami, and Phoenix. It also found that “well-maintained” lawns were strikingly similar nationwide: A person’s maintained lawn in Baltimore would have more in common ecologically with a maintained lawn in Miami than it would with their neighbor’s unmanaged yard.

Edible landscapes, on the other hand, increase the diversity of insect populations, create habitat for birds and other wildlife, and provide ideal conditions for the millions of microbes that make up healthy soil, which is critically important for their ability to store carbon and slow climate change.

All that being said, lawns are still as American as apple pie, and not everyone is rushing to turn theirs into a productive landscape. “Houston is a tough market,” says Josh Reynolds, owner of the Houston-based Texas Edible Landscapes. “I am trying to educate Texans through the use of workshops, but interest remains low.”

And sometimes there can be resistance even from local government and rule makers. Homeowners associations (HOAs) are known for being sticklers about the appearance of one’s yard in a neighborhood. Successful edible designers take this into account, however, creating landscapes that are not just productive, but pretty as well.

Whether you want a consultation, a small raised bed, a full overhaul to turn your yard into an edible forest, or just to chat with someone about ecology, below are 12 businesses and groups around the country that can help.

Earthbound Artisan
Located: Lancaster, Pennsylvania
Serving: Pennsylvania’s Berks, Chester, Dauphin, Lancaster, Lebanon, and York counties
Details: Earthbound Artisan was founded in 2014 by Garrett Book and Tim Seifarth after Seifarth, who has been a landscaper now for over 20 years, became disillusioned with “conventional” landscaping that included installing lawns and ornamental trees as status symbols. Earthbound offers traditional native gardens and designs based on permaculture, or what they call “design with a purpose.”

Ecologia Design
Located: Frederick, Maryland
Serving: Maryland, northern Virginia, and the Washington, D.C. area
Details: Owner Michael Judd started Ecologia Design in 2010 after working for 18 years in Nicaragua on tropical and edible landscapes and food security. Ecologia offers services from consultations to full-service installations. Judd also has a nursery and a permaculture site at his home in Frederick, where he leads talks and demonstrations. He also wrote a book, "Edible Landscaping with a Permaculture Twist," to help people create these edible landscapes on their own.

HomeHarvest LLC
Located: Boston, Massachusetts
Serving: Boston and the Greater Boston Area
Details: Founded by Ben Barkan a decade ago when he was 18 years old, this business has grown from a kid on a bike towing a trailer and a shovel to a full-service edible landscaping company with five employees and a truck. Barkan is a licensed landscaper offering full-service edible landscaping with features including custom stonework, pollinator gardens, and medicinal herbs.

Bountiful Backyards
Located: Durham, North Carolina
Serving: The Triangle area
Details: Owners Kate DeMayo and Keith Shaljian began Bountiful Backyards in 2007 as an alternative to starting farm, which they say was out of reach due to the cost of land. They offer design and installation services of low-maintenance gardens that use permaculture principles and comply with HOA requirements. Some of the installations they provide include vegetable gardens, fruit trees, herbal and tea gardens, pest management, water catchment and rain gardens. They also teach classes and give workshops in the community.

Fleet Farming
Located: Orlando, Florida
Serving: Orlando
Details: Fleet Farming is a nonprofit urban agriculture program that also offers edible landscaping services. After an initial consultation, the Fleet Farming team will install raised beds fitted with timed drip irrigation. They provide soil, seeds, plants, and a gardening guide. In addition, they offer edible forests that include perennial vegetables and fruiting trees that include such tropical plants as bananas, mangos, and avocados. The non-profit also has educational events and demonstration plants in a number of Orlando neighborhoods.

Texas Edible Landscapes
Located: Houston, Texas
Serving: Southeast Texas
Details: Started in 2016 by Josh Reynolds, who says his specialty is suburban landscapes where Homeowner Associations (HOAs) discourage the planting of anything besides pretty, ornamental lawns. “I like to design food-producing ecosystems that disguise themselves as typical ornamental plants that fit in with the neighborhood,” he says. The company is a design and consultation firm that contracts out to trusted associates if a client wants an installation.

Backyard Abundance
Located: Iowa City, Iowa
Serving: Iowa City and surrounding areas including parts of Illinois, Minnesota, Nebraska, and Wisconsin
Details: Started by Fred Meyer in 2006, Backyard Abundance creates edible landscapes to meet their clients’ lifestyles and habits. Before he designs a landscape, Meyer does an in-depth consultation to understand what his client is looking for. “We want to create a positive beneficial relationship between the homeowner and their landscape,” he says. Meyer also focuses on aesthetics so that none of his clients will face problems from their HOA. In addition, Backyard Abundance has established edible classrooms, forests, and parks in Iowa City.

Custom Foodscaping
Located: St. Louis, Missouri
Serving: St. Louis and the surrounding area
Details: This two-year-old company creates custom edible landscapes. “I was inspired to start the business because I hope to help communities reimagine the places in which we grow food,” says owner Matthew Lebon. In the last year, he’s done around 40 consultations, five designs, and 10 installations. He also is a “garden coach” for a handful of clients. His focus is on planting perennial food crops—pears, chestnuts, asparagus, and others—in the hopes of creating a regenerative system based on perennial food crops.

Portland Edible Gardens
Located: Portland, Oregon
Serving: Portland metro area and surrounding suburbs
Details: Portland Edible Gardens was founded in 2013 by Ian Wilson to help people who wanted to grow their own food but don’t know how. “Portland has always had a reputation for valuing sustainability and fresh, local and organic food,” Wilson says. “But even in such a ‘green’ city I became aware that people had very few resources for actually learning how to grow their own food at home.” The business offers consultations and installations of raised garden beds, fruit trees, and berry bushes. They also do garden maintenance and one-on-one garden mentorship, bringing everything a client needs to start a garden.

Urban Plantations
Located: San Diego, California
Serving: San Diego County and Orange County, California
Details: Karen Contreras began Urban Plantations in 2008 at the height of the Great Recession. However, her risk paid off as San Diego families turned to growing their own food as a way to cut costs. Contreras stepped down in 2016 and the company is now run by Paige Hailey and Mat Roman. The business has around 20 employees and install roughly 50 new gardens and orchards each year.

Don’t worry if you don’t see a business near you on this list, there are many more out there that you can find online.