McDonald Trump: The surreal White House fast-food feast was America at its worst

Is Trump really the Hamburglar? And was that the craziest moment of his presidency? No, there will always be more 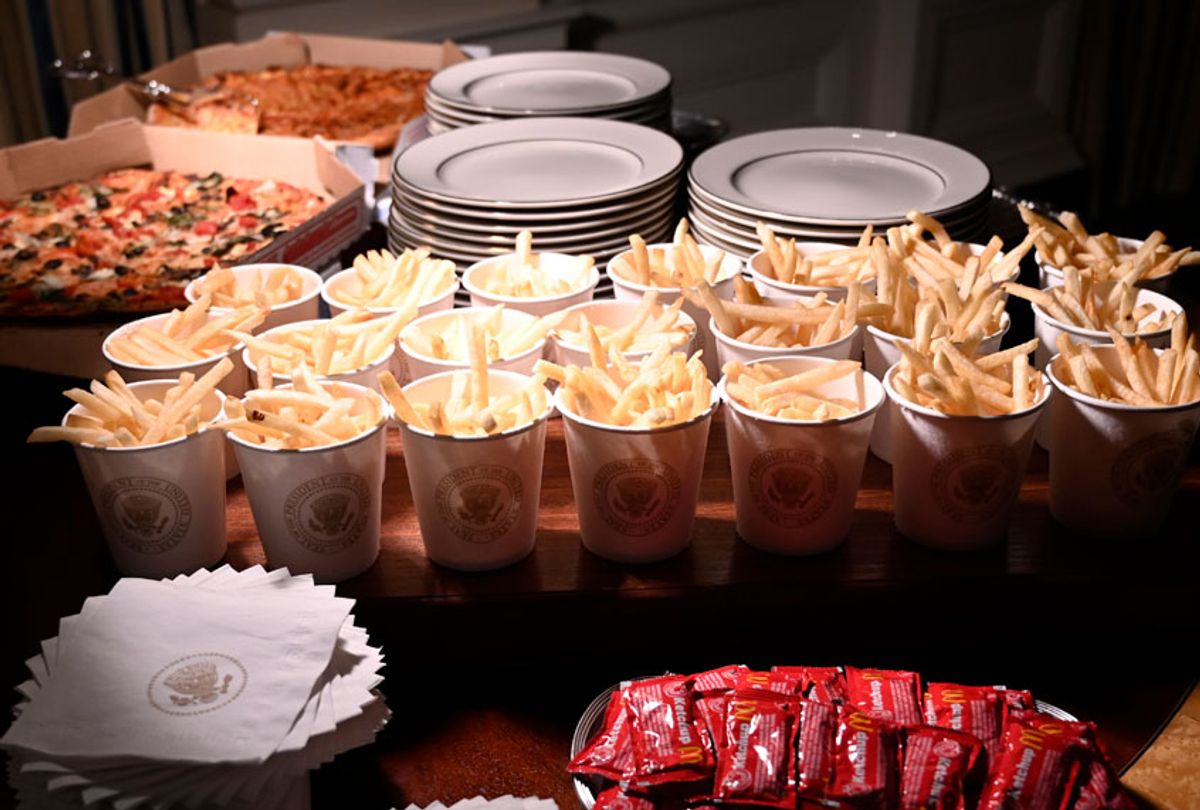 french fries and pizza are some of the fast food items for the reception for the Clemson Tigers in the State Dining Room of the White House in Washington, Jan. 14, 2019. (AP/Susan Walsh)
--

Monday evening, he hosted the national collegiate football champions, the Clemson Tigers, at the White House. Magnanimous and proud, smiling and generous, Trump presented a smorgasbord. The offerings? Hundreds of hamburgers and other food items from McDonald's, Wendy's, Burger King and Domino's Pizza. The food was served lukewarm if not cold. Trump posed while a painting of Abraham Lincoln looked down upon him with an expression of evident disgust could not be more plain.

If Donald Trump is the worst of everything about America's national character, then his fast-food feast is the perfect accompaniment and metaphor for his presidency and the social forces that propelled him into office. It is all a spectacle; the substance which does exist is toxic, a black hole pulling and bending reality to Trump and his enablers' whims and needs, an authoritarian singularity.

Ronald McDonald, the semi-beloved children's character and clown pitchman for McDonald's fast food, has many friends. He enjoys the company of a purple dinosaur man-beast of indeterminate species. At one time, Ronald McDonald hung out with an upright, walking chicken-person who flew a plane. And there is the beloved rapscallion the Hamburglar, who, wearing what looks like prison stripes and a mask, cannot stop himself from absconding to his secret lair with Ronald McDonald's hamburgers.

Given his behavior on Monday, it now appears that Donald Trump could be the Hamburglar's doppelganger, his corrupt and very dangerous brother or other relative.

When Americans laugh at Donald Trump, it is because we are sad and in pain. There is nothing funny about his disastrous presidency.

Megan Garber of the Atlantic explains how Trump's fast-food feast is not merely the height of (literal) poor taste or an example of how little gravitas and dignity are left to the White House and the American presidency.

Instead, it is an example of the power of symbols and new communication styles in the 21st century.

The broader implications of the meal, though, are philosophical. Lurking at the edges of the shutdown — wrapped, along with Wendy, around those rows of wilted burgers — are deeper questions about what government ultimately is for, and about what government can truly accomplish on behalf of a vast and hectic nation. Trump’s feast was in that sense also an argument, one that aligns him, to an unusual degree, with the most conservative elements of the party he is steadily remaking in his own image: Government, all those neat lines of Big Macs insist, isn’t as important as some Americans have assumed it to be. Institutions, staffs, committed teams striving on behalf of the country: overrated. The government is shut down, and yet the Filets-O-Fish appeared nonetheless, each one alleging that, shutdown or no, the people shall have their feast. A McChicken in every pot.

The burger buffet also made a different kind of argument — this one about the ways political communication will work in the age of viral iconography. ...

Here was the American president, standing before the whirring cameras, willfully making himself into a meme, and using the particular power of the meme — deep stories, shared symbols — ... to advocate for disruptive political change. The viral images of Trump and his McFeast allege, in spite of so much evidence to the contrary, that a functioning government is not fully necessary; the only thing Americans really need, the Quarter Pounders whisper, is Trump himself.

Trump's presidency is the result of deep cultural, political and social problems in the United States. He and his movement are the symptom, not the disease. This has only become more acute and obvious as the United States, the American people, and the world enter the third year of his presidency.

As Chris Hedges argues in his book "Empire of Illusion," America is a country beset by myths, lies, shadows, tricks, chimeras and ghosts. These take the forms of illusions about happiness, sex, love, education, self-worth, progress, opportunity and the competency of the leadership class. With Donald Trump, another illusion is added as well -- the assumption that the president of the United States is a patriot who loves his own country and is not working for a foreign hostile country against the American people.

Trump's White House fast-food feast and sober bacchanal, as a metaphor for his presidency -- and America as a whole -- embodies Hedges' observation:

In an age of images and entertainment, in an age of instant emotional gratification, we neither seek nor want honesty or reality. Reality is complicated. Reality is boring. We are incapable or unwilling to handle its confusion. We ask to be indulged and comforted by clichés, stereotypes, and inspirational messages that tell us we can be whoever we seek to be, that we live in the greatest country on earth, that we are endowed with superior moral and physical qualities, and that our future will always be glorious.

And what of Trump's happiness at the excess and gluttony of his White House fast-food feast? This reflects a lie and illusion that Hedges also exposes:

Here, in the land of happy thoughts, there are no gross injustices, no abuses of authority, no economic and political systems to challenge, and no reason to complain. Here, we are all happy.

It is all so very surreal.

Several days ago, I spoke with author and cultural critic Jonathan Lethem about his new book "The Feral Detective." We reflected on what feels like a never-ending surreal moment where one heretofore and unbelievable event is followed by another: Trump's chronic lying, his status as a possible Russian lackey or agent, resurgent white supremacy, right-wing Christians who believe that the profligate sinner Donald Trump is a divine messenger, mass shootings, bombing plots by a Trump cultist stripper who lives in a van, how the 1 percent and other plutocrats live off of the state while telling others to just work harder, and the long con of the Republican Party's hold on its public.

Lethem made a sharp observation: The point of surrealism as an aesthetic-intellectual project was to break from "the normal" in order to have a form of catharsis where the truth could be made knowable. From this catharsis there would be closure, then would come forward movement and perhaps progress.

The surreal world that is Trump's America is a continual narrative with no conclusion in sight. The pages keep turning and there is no emotional release or catharsis. Politics becomes a type of perpetual cliffhanger. It is all perpetual stress and anxiety, a story without a climax.

The American people are lost. Will they ever come back home to some semblance of collective sanity by writing a final chapter in the maddening and surreal story of President Donald Trump?

The American people have been changed. I worry that it is for the worse. I also worry that many Americans will stay lost -- some of them by choice -- because the real world is simply too hard and the vacuous illusions and promises of Trump's America are too intoxicating.