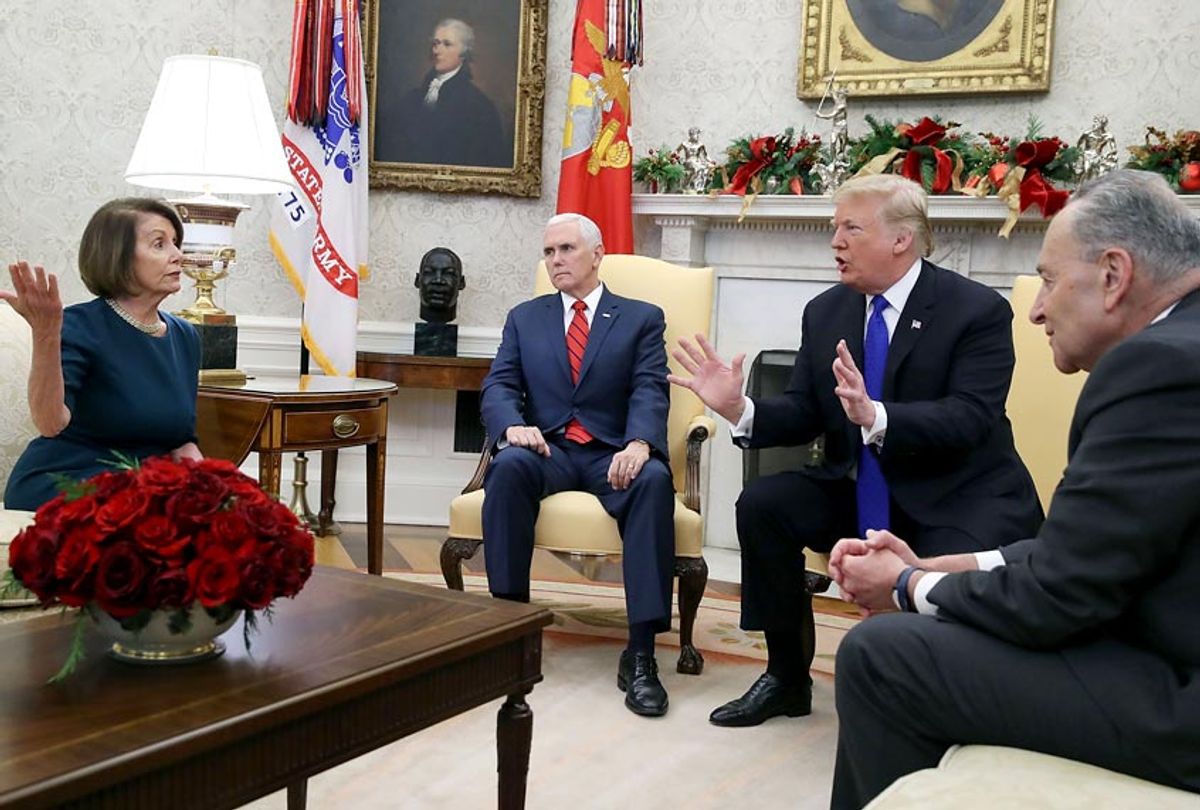 President Donald Trump denounced House Speaker Nancy Pelosi as a "Radical Democrat" due to the Democratic congressional leader's refusal to accept his proposed deal exchanging temporary protections for vulnerable immigrants in return for building a border wall and ending the government shutdown.

"Nancy Pelosi and some of the Democrats turned down my offer yesterday before I even got up to speak. They don’t see crime & drugs, they only see 2020 - which they are not going to win. Best economy! They should do the right thing for the Country & allow people to go back to work," Trump wrote in his first tweet on Sunday morning. This was quickly followed by two other tweets.

"No, Amnesty is not a part of my offer. It is a 3 year extension of DACA. Amnesty will be used only on a much bigger deal, whether on immigration or something else. Likewise there will be no big push to remove the 11,000,000 plus people who are here illegally-but be careful Nancy! Nancy Pelosi has behaved so irrationally & has gone so far to the left that she has now officially become a Radical Democrat. She is so petrified of the 'lefties' in her party that she has lost control...And by the way, clean up the streets in San Francisco, they are disgusting!" Trump added in a pair of tweets that followed.

The president later tweeted, in reference to Pelosi's suggestion that Trump not deliver his State of the Union address in person, "Nancy, I am still thinking about the State of the Union speech, there are so many options - including doing it as per your written offer (made during the Shutdown, security is no problem), and my written acceptance. While a contract is a contract, I’ll get back to you soon!"

The president had offered to grant three years of protection from deportation to undocumented immigrants who were brought to the United States as children under the Deferred Action for Childhood Arrivals program, according to CNN. His proposal would have also offered protections for individuals from specified nations who had previously been allowed to legally stay in the United States under the Temporary Protected Status program. In return, the president wanted $5.7 billion in funding for a US-Mexico border wall.

Even before Trump delivered his speech suggesting the new compromise offer, Pelosi rejected it as being unacceptable and "a compilation of several previously rejected initiatives, each of which is unacceptable and in total, do not represent a good faith effort to restore certainty to people's lives."

In her statement, Pelosi added that "it is unlikely that any one of these provisions alone would pass the House, and taken together, they are a non-starter. For one thing, this proposal does not include the permanent solution for the Dreamers and TPS recipients that our country needs and supports."

"It was the President who singled-handedly took away DACA and TPS protections in the first place -- offering some protections back in exchange for the wall is not a compromise but more hostage taking," Schumer wrote in a statement.

During an Oval Office meeting with Pelosi and Schumer last month, Trump openly accepted responsibility for shutting down the government in order to get his border wall.

"I am proud to shut down the government for border security, Chuck, because the people of this country don’t want criminals and people that have lots of problems and drugs pouring into our country," Trump said at the time. "So I will take the mantle. I will be the one to shut it down. I’m not going to blame you for it. The last time you shut it down, it didn’t work. I will take the mantle of shutting down."