How "Valley of the Boom," a story of tech world disruption, disrupts TV too

Salon talks to Matthew Carnahan and Lamorne Morris, the creator and star, about NatGeo's wild tale of the tech boom 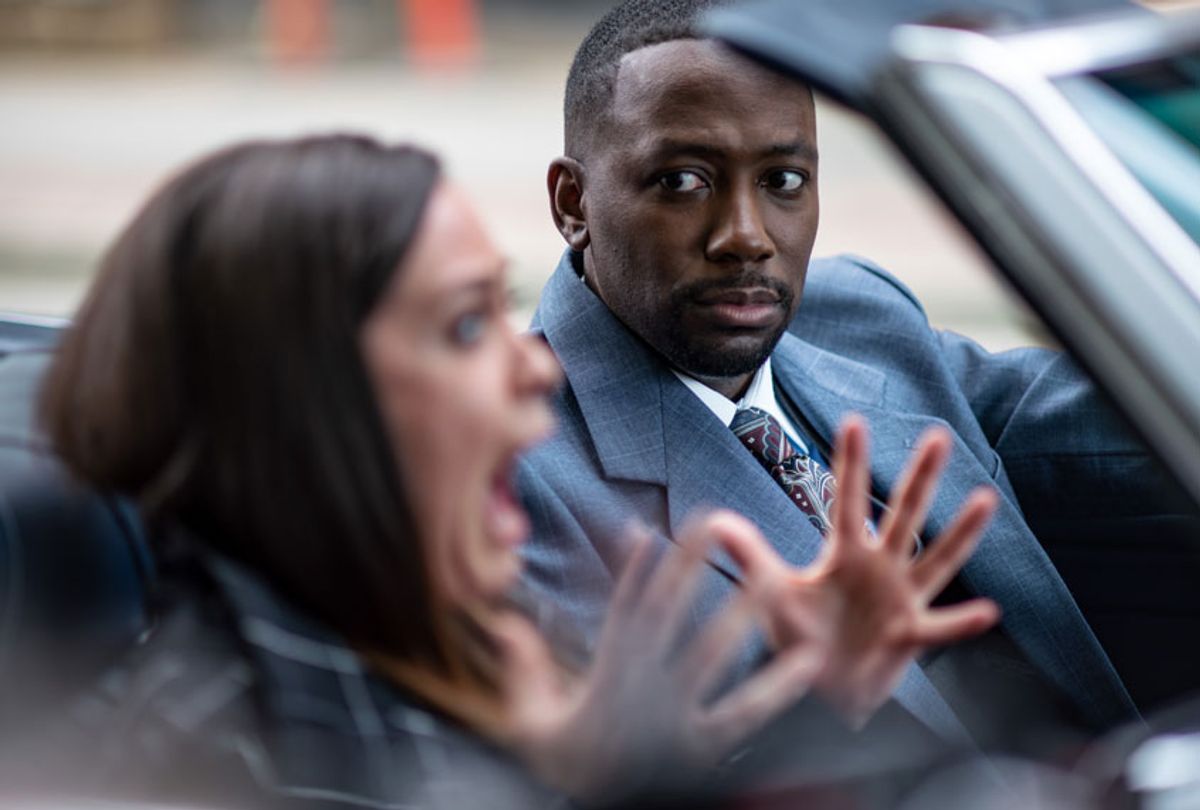 “Valley of the Boom,” currently airing Sundays at 9 p.m. on National Geographic, is much more entertaining than the typical viewer might expect it to be.

Notice that I didn’t use the phrase than it “should” be, or “deserves” to be. In mimicking the spirit of the tech industry that inspires it, this is a show that defies all conventions or expectations of how it should operate. It’s a drama, except when it’s obviously gunning for laughs. It’s part documentary and part re-enactment, with its actors regularly reminding the audience that some of what they’re seeing is a fiction. Fourth wall-breaking and concrete realizations of metaphorical descriptions — as in, for instance, getting slaughtered by the competition — are the norm here.

Series creator Matthew Carnahan, whose writing credits includes “House of Lies,” intentionally constructed the six-part limited series as a hybrid, an experiment, and that’s only appropriate for an industry shaped around mantras preaching rapid growth and frequent failure as cornerstones of success. Not merely success — conquest.

Carnahan demonstrates wisdom in employing such visual idiosyncrasy. Otherwise, who would tune in for the brief, storied histories of Netscape, TheGlobe.com and Pixelon, the ancestors of modern search engines, social networks and video streaming services?

Aided by a cast that includes Bradley Whitford, Lamorne Morris, Steve Zahn and a very charismatic puppet, Carnahan takes viewers on a crazy ride through the tech industry’s ancient times. Among them however, it’s Morris’ venture capitalist figure — an amalgam of several ambitious Wall Street types — who keeps the audience from getting lost and translates tech jargon into digestible, entertaining soundbites.

At an industry event held prior to the debut of “Valley of the Boom,” Salon sat down with Carnahan and Morris for separate interviews. This Q&A contains responses from each, edited lightly for clarity and length.

Can you describe how you intended this series to not only explain the history of the mid-‘90s tech boom, but perhaps augment the experience of living that history?

Matthew Carnahan: Sure. So, what we did is we took three untold stories from the dot com boom of the ‘90s, starting with the Netscape IPO in, whatever that was, ‘94?. . . and built the series around that, and around three companies. It's about 70 percent scripted and about 30 percent unscripted, and we basically tried to do something that explodes those two genres in a way that reflects the disruptive nature of these tech pioneers. We tried to do something that dramatically reverberates in the way that these makers’ tech reverberated.

And it's really fun. It's strange and new, and we have rap battles, and flash mobs, and imposters, and we're just trying to find a way to mess with the form and to create something a little bit new.

Lamorne Morris: Any time you're talking about tech, business, or law, it's boring. You have to have a way to kind of up it for people. Matthew did a great job of  piecing together archival footage, talking heads, great actors playing certain characters, and adding a narrator, which is what my character is. These creators are being disruptive, so this show has to be disruptive, you know?

The history of the internet is actually quite young. But, also, it's incredibly compressed. So many innovations occurred in a brief amount of time.

And sometimes because of that, when we see stories about Bill Gates and Steve Jobs, it's all about the personality, and it's told in these stories of these great innovators, and not necessarily what went into the innovation and what it did for human kind.

Carnahan: Well personally, my attention is only good for a couple of talking heads. Then I've got to see something that dramatizes what the people are talking about, and hopefully it's not just a scripted reenactment of some moment at a keyboard when somebody figured out how to write a line of code, because that's gonna put me to sleep as well.

For example, we cover the browser war between Netscape and Microsoft. That's a slightly heady, slightly hard thing to explain.  Instead I wrote a rap battle and hired two amazing rappers, one to be Netscape and one to be Microsoft.

So rather than try to explain, “Well Netscape was a small company about one three-thousandth the size of Microsoft, but they had 87 percent market share and Microsoft, basically, committed anti-trust violations and leveraged their size and power into killing Netscape, and how did this happen?”… Well, that's a lot of talking heads. We still do talking heads around it, and we still do dramatized scenes. But, we also have two really good rappers battling it out and explaining one from Microsoft's point of view and one from Netscape's point of view what happened.

Morris:  The cool thing about my character’s arc is that he gets to talk to the crowd, to the audience. He gets to break the fourth wall, but he's still in the scenes, interacting with some of the characters. When you're dealing with, let's say, the Michael Fenne character (played by Steve Zahn), the guy who is fraudulently creating a company and people are buying into him. At his core he is just a con man. I get to talk to the audience about what they're looking at, then I'll go back into the scene.

Hopefully that helps the audience to laugh at certain points that are getting to be too tight and too tension filled. You let some of the air out of the room a little bit.

So how are you able to strike a balance between these known personalities and relatively unknowns, while keeping the story interesting? A lot of people don't the names of some of the key developers and engineers who effectively gave birth to the internet as we know it.

Carnahan: Well, Marc Andreessen's singular contribution, probably, was he wrote — pretty much single handedly, almost — the first Mosaic browser, and then with the team, developed the Netscape browser. That affects every minute of our lives today.

Marc Andreessen is not a knowable character. He's completely enigmatic, completely removed, and not very relational. And so, it's not so much about Marc Andreessen the character; it's more about Marc Andreessen, this person who looked at a bunch of zeroes and ones and was able to see something that no one else had ever imagined or been able to see, was able to not only do that but to, with help from his team, create something that was intuitive and usable for almost everybody. This suddenly democratized the internet. It wasn't for academics and tech geeks anymore, it was suddenly for airline reservations and everyday things.

Let’s talk about the second boom of the internet, which is still going on, and is all about optimization and personalization. But it's also all about these competing ideas of wealth. On the one hand, there’s the vision of the world being simplified and democratized. But the reality is that the second tech boom is really the story of  the concentration of wealth. So in the wake of “Valley of the Boom,” what do you think defines, on a visceral level, the story of The Internet, version 1.0, and what can we learn from it?

Carnahan: I would argue that the decline of 2.0 is certainly underway, or the turn toward internet 3.0 has already happened. It was a slightly softer landing because there are now micro-bubbles. It's not one large bubble that, once people began to see it was based largely on hysteria and [fear of missing out], that all went away.

Now we're entering into the 3.0 version, which is the blockchain crypto technology revolution. Where maybe we get to seize back a little bit of our anonymity and privacy and possibly to decentralize some of what you were pointing out has happened, which is the incredible concentration of wealth at the north end of the spectrum, and the complete collapse of a middle class.

It'll be interesting to see if some of the promise of that, with the death throes of net neutrality, if the tension wins that battle. If we're indeed on our way to creating a horrible cyber class system, or if the crypto world will prevail and we’ll be able to take back some of that unfortunate loss of whatever meritocracy or democracy, or whatever it is that we have now.

I feel like the thing that blew me away as I began to look at this world, and this moment in history, is I didn't really understand what had happened. I was just the passenger in the tech revolution. But the creativity involved is amazing. What I always looked at as a business world, the tech world, is based on people who make amazing things, and often times don't profit from that.

We often think, “Oh you make something, you go public, and: Billionaire!” Those stories are a real exception. Marc Andreessen was an exception. Many of the people who helped make Netscape walked away with some serious wounds and cuts and blows, and not a lot of money.