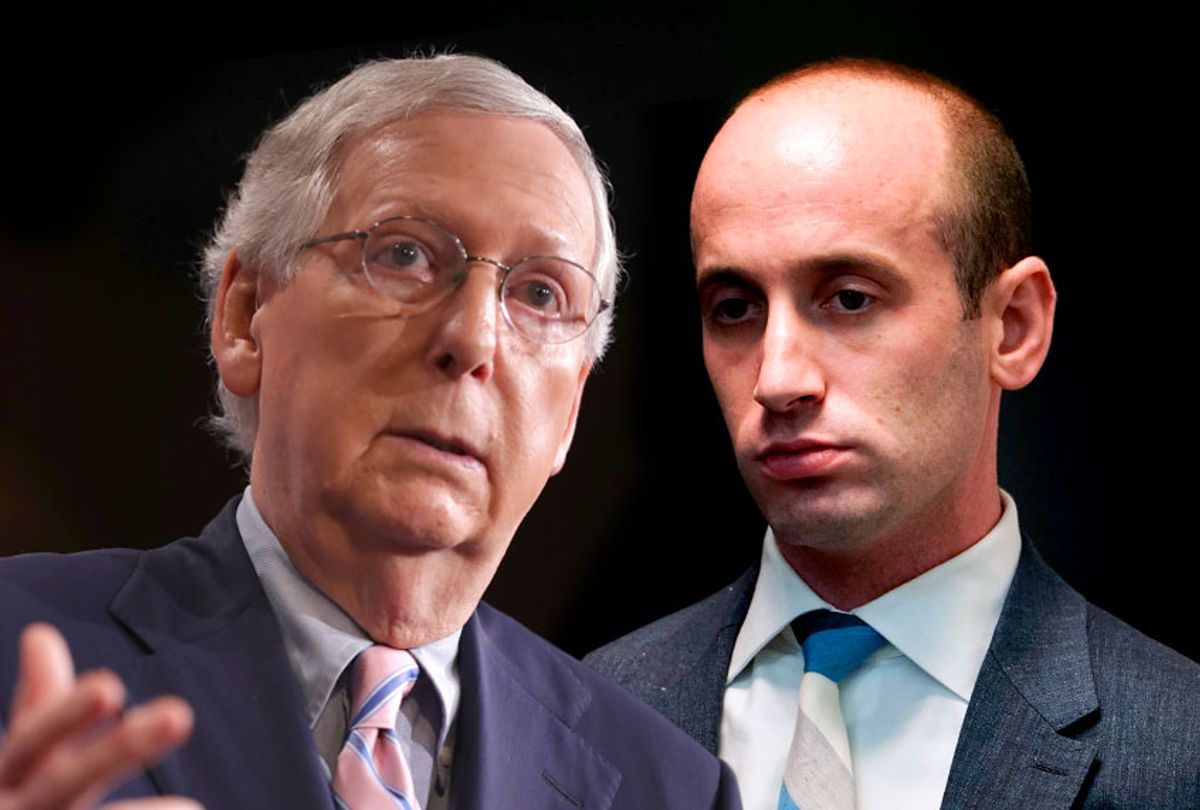 On Saturday, Trump announced that he would agree to end the government shutdown and temporarily protect 700,000 DACA recipients and hundreds of thousands of other immigrants with temporary protected status, or TPS, in exchange for $5.7 billion in funding for his proposed border wall.

That announcement came after The New York Times reported that White House adviser Stephen Miller had privately “intervened” to reduce the number of protected Dreamers from the 1.8 million who are eligible for protections to the 700,000 existing DACA recipients.

Trump only offered to suspend his own moves to scrap protections for DACA and TPS recipients for the next three years. No permanent solution for those immigrants was even suggested. But Vice President Mike Pence praised the offer as a “compromise” offered to Democrats in “good faith.”

But on Monday, Senate Republicans introduced a lengthy bill with the text of the so-called “compromise,” which turned out to include many other changes to the immigration system that the president had failed to mention. In particular, the bill includes a massive overhaul of how legal asylum applications are processed.

The bill immediately bans Central American children seeking asylum from coming to the United States. They could only apply for asylum through an application center in Central America, which does not currently exist.

Philip Wolgin, the head of immigration policy at the Center for American Progress, told the Washington Post that the move would fly in the face of international norms that allow those seeking asylum from conditions in their own country to present themselves at borders with the right to have their claims heard. Under the proposed Senate bill, people fleeing violent conditions in their home countries would be forced to stay there while their applications were processed, potentially putting them at risk.

The bill would also limit the total number of minors who can be granted asylum at 15,000 a year. Last year alone, about 50,000 unaccompanied minors were apprehended at border crossings. The bill also caps the total number of asylum requests at 50,000 per year.

Apart from taking a sledgehammer to the existing system, the bill also requires proof, as AlterNet notes, that any asylum case is “in the national interest” and redefines what constitutes a “frivolous” asylum claim by including potential errors like filing at the wrong time, filing in the wrong country or filing in order to delay deportation. The bill also makes it significantly harder for those with refugee status to apply for a green card and would permanently ban those whose status is revoked for any reason from entry to the United States.

The bill is so “loaded up with poison pills that it looks as if it was deliberately constructed to make it impossible for Democrats to support,” the Washington Post’s Greg Sargent wrote, adding that such a maneuver “would be perfectly in keeping with the M.O. that we’ve already seen from top adviser Stephen Miller, who appears devoted to scuttling any and all policies that could actually prompt compromises but which don’t endeavor to reduce the total number of immigrants in the United States to as low a figure as possible.”

Gabriel Malor, an attorney who writes for the Federalist, a conservative publication that supports many Trump administration policies, wrote that this attempt to destroy the existing asylum system willfully ignores the very reason people apply for asylum.

"Asylum is a form of relief for people who are being persecuted in their home countries and the authorities there are unable or unwilling to protect them (or are the source of the persecution). You can't condition asylum on people remaining in the place where they are persecuted,” Malor wrote.

Malor noted that the ban on Central American minors is “pretty bad and reason alone to oppose this bill” but “the changes to whether an application can be found to be frivolous applies to ALL applicants, and it's completely unreasonable,” which is why the bill "will (and should) get zero votes from Democrats, and to be honest, Republicans should be shooting question marks at McConnell, too."