Reality is starting to creep into the billionaire Oasis of Davos 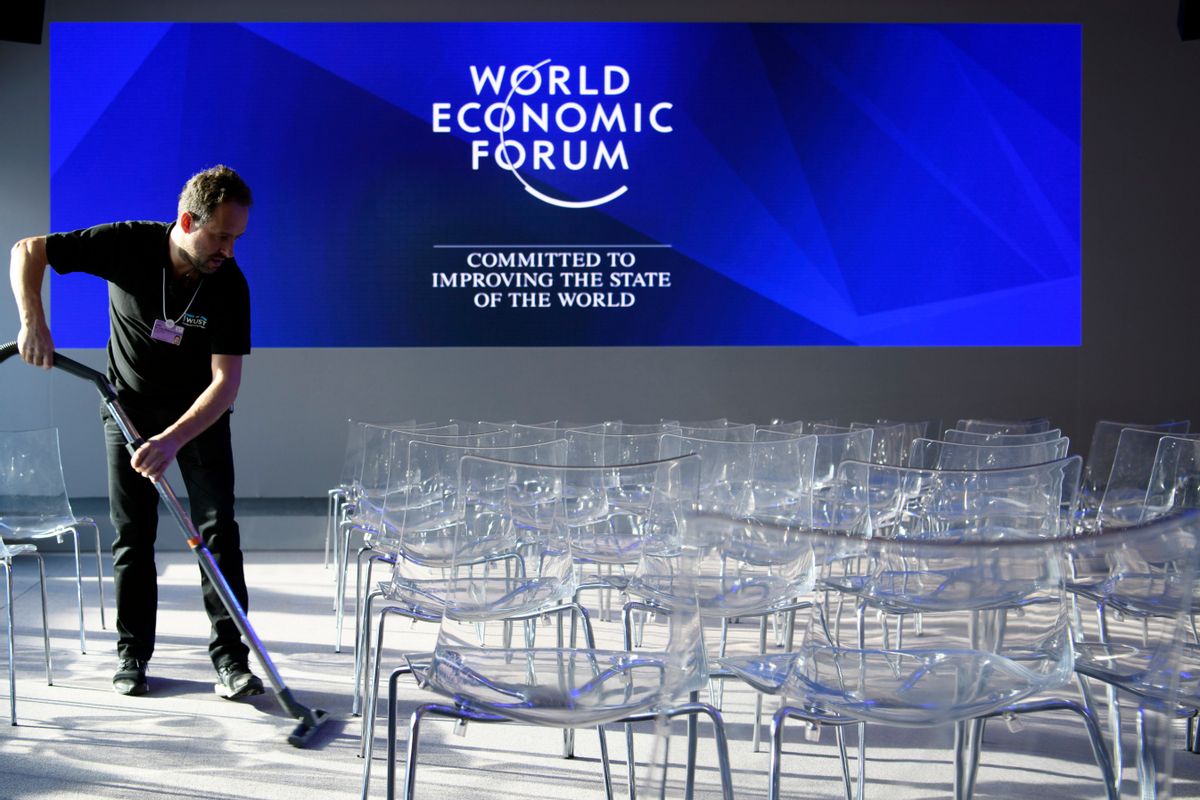 A worker vacuum-cleans the carpet inside the Congress Center ahead of the 47th annual meeting of the World Economic Forum, WEF, in Davos, Switzerland, Monday, Jan. 16, 2017. (Laurent Gillieron/Keystone via AP) (AP)
--

At this time of year, about 2,000 private jets fly into Zurich airport and to various smaller Swiss airports (including the Dübendorf military airbase). Hundreds of helicopter flights move from Zurich to Davos, where the hotel rooms go for as high as US$10,000 a night during the World Economic Forum (WEF). The WEF, which began in 1971, opened this Tuesday and runs through to the end of the week. The theme is Globalization 4.0, which refers — it seems — to the need to tackle the high-tech economy and to create a new architecture for a crumbling world system.

Evidence of the irrelevance of Davos and of that crumbling system is clear. Neither the U.S. President Donald Trump nor the Chinese President Xi Jinping will be there. With the European Union falling apart, neither British Prime Minister Theresa May nor French President Emmanuel Macron will be flying in. Germany’s Angela Merkel will be stuck with strongmen such as Brazil’s Jair Bolsonaro and Israel’s Benjamin Netanyahu. It will not be pleasant company.

The World Economic Forum slips into liberal language, reflecting concern for the deep disparities in the world and the crises of war and climate change. It is impossible to ignore fully the calamities in our world. They have to make a show of taking these things seriously.

There are currently 2,208 billionaires in the world, twice the number since the global financial crisis of 2007-08. Most of them are from North America and Europe. They currently have more wealth than ever before, according to a new report from Oxfam International. The combined wealth of the richest 26 among these 2,208 billionaires reached US$1.4 trillion. This amount of wealth is equivalent to the total wealth of the planet’s 3.8 billion poorest people. That means that only 26 individuals have as much wealth as 3.8 billion people. Let that sink in.

It is not that these men — and a few women — work so hard that they earn their wealth. Most of them inherited their wealth; others were able to get their hands on public assets at fire-sale prices during the time of privatization. Meanwhile, hundreds of millions of women in working-class and middle-class households do millions of hours of unpaid labor to maintain a system that has cut social safety nets and social welfare. The Oxfam report has a startling piece of data. “If all the unpaid care work done by women across the globe was carried out by a single company, it would have an annual income of $10 trillion — 43 times that of Apple.” And yet, it is people who own Apple and its kindred firms who make the billions while these women earn nothing. This is the actual structural crisis that will not be discussed at Davos. It goes against the interests of the billionaires to open this conversation.

A few days ago, an inflatable dingy sunk off the Libyan coast. It was carrying at least 120 migrants. Three of them survived. They were brought to the Italian island of Lampedusa, where they said that the boat carried people from West Africa and Sudan. There were children on board, and one pregnant woman. The men who survived came from Sudan and Gambia.

The International Organization for Migration (IOM) counts the number of people who attempt to cross the Mediterranean Sea. It says that in the first 16 days of 2019, 4,216 people attempted the crossing as compared to 2,365 in the same period last year. Thus far, 200 migrants have already died in these perilous waters. Italy’s far-right government has been arresting those migrants who make it to Europe and taking them back to Libya. There is as yet no count of how many of these migrants go back to the boats and try to make the passage again.

It is estimated that close to a million migrants are amassed in Libya, some in concentration camps, hoping to make it to Europe. They mainly come from Bangladesh, Egypt, Mali, Niger, Nigeria, Pakistan, Sudan and Syria. What brings them to Libya, even as they hear stories in their homelands of the dangers of this journey? Many come because war has torn their country apart — wars in Sudan and Syria as cases in point. But the rest come because of the harshness of their lives, the impossibility of making a living where they continue to work but their work only fattens the bank accounts of the few.

Most of the migrants are economic refugees, people who work hard but starve and dream of a better life anywhere else. Policies that would help them at home — such as an increase in social welfare, universal health care and universal education — are denied. The rich no longer want to pay taxes, which is what increases the wealth of the few and prevents even sympathetic states from offering a wide social democratic agenda. The rich also hide roughly US$7.6 trillion from tax authorities, money secured in tax havens that could provide the finances necessary to improve the lives of people where they live.

Davos Man will smile at the World Economic Forum and talk at length about the need for “reform” and to tackle the “challenges” in the world. But, at the same time, Davos Man will fight hard to protect the wealth that has been secreted away, wealth that people created, and that people are now denied.

There is a direct line between the increased wealth of the billionaires and the increased number of migrants who want to cross the Mediterranean. One lot flies into Davos in their private jets, while the other sits in sinking rubber boats in the sea.