It’s at the heart of Trump’s Russia connections, and that’s why he and Giuliani have lied about it repeatedly 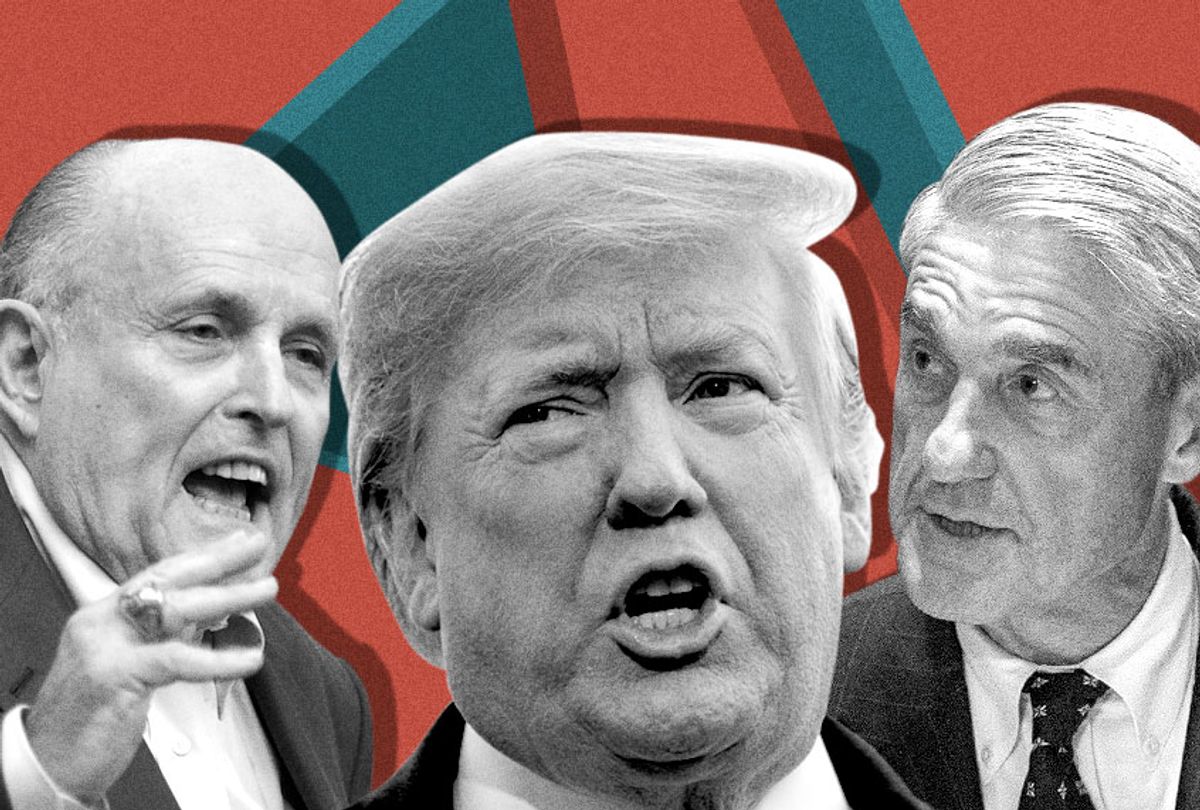 Did you watch Trump lawyer Rudy Giuliani over the past couple of days, doing his Double-Reverse Triple Salchow about the Moscow Trump tower story? Trying to pull Trump’s ass out of the fire, he somehow managed to rescue the Buzzfeed story, for crying out loud!

You remember the scoop Buzzfeed published an eon ago . . . ooops, it was only last Friday . . . that Trump ordered his personal lawyer Michael Cohen to lie to a congressional committee about the Trump Moscow tower deal. The office of the Special Counsel surprised everyone the next day with a non-denial denial that somehow managed to avoid saying that Buzzfeed got its story wrong, while saying that the information in their story didn’t come from the Special Counsel.

The White House could have left it there, with doubt cast on whether Trump committed a felony by suborning perjury, but nooooooooo! They sent Rudy out to do the Sunday morning talk shows to “set the record straight,” or maybe to hide the record behind a fogbank of bullshit where it would hopefully be swept up by a waterspout and disappeared into the upper atmosphere.

On Meet the Press on Sunday Giuliani said, “They [Trump and Cohen] did have conversations about it [Trump Tower Moscow]. The conversations lasted throughout parts of 2016, the president is not exactly sure when they ended. Probably up to . . . could be probably up to as far as October, November.”

Apparently, that answer displeased the man in the Oval Office, because Giuliani made a statement on Monday morning saying, “My recent statements about discussions during the 2016 campaign between Michael Cohen and then-candidate Donald Trump about a potential Trump Moscow ‘project’ were hypothetical and not based on conversations I had with the President.”

Asked later the same day by the New Yorker’s Isaac Chotiner whether Trump had spoken to Cohen about the Moscow project, Giuliani said, “I am not saying that he did it. I just told you he didn’t do it. I am telling you that their investigation is so ridiculous that, even if he did do it, it wouldn’t be a crime.”

Chotiner asked, “Wait, Mr. Mayor, if he had a project in Moscow that his attorney was discussing and he himself may have been involved in while he was calling for a loosening of sanctions against Russia and a different policy in Ukraine, and the American people didn’t know anything about that, you wouldn’t find that problematic?”

But what about the story in The New York Times on Monday: “President Trump was involved in discussions to build a skyscraper in Moscow throughout the entire 2016 presidential campaign, his personal lawyer said on Sunday, a longer and more significant role for Mr. Trump than he had previously acknowledged. ‘Discussions were going on from the day I announced to the day I won,’ Mr. Giuliani quoted Mr. Trump as saying during an interview with The New York Times.”

“He’s wrong! They’re wrong!” Giuliani told Chotiner. “I didn’t say that. Go find out where I said that on Sunday. I never said he was involved in such conversations . . . What I was talking about was, if he had those conversations, they would not be criminal.”

The Trump defense strategy (if it can be called that) surrounding the Moscow Trump tower deal is so hard to keep up with because it changes so rapidly. First Giuliani admits there was a Trump Moscow tower deal, and Cohen and Trump talked about it from 2015 through out 2016 all the way up until the day Trump was elected. Then Trump didn’t talk to Cohen about it. Then, even if Trump did talk to Cohen about the Moscow project, it wouldn’t have been a crime. Then there was no Moscow project at all. Then Giuliani himself never told the newspaper of record that Trump had talked about the Moscow project at all.

Let’s see if we can figure out what’s going on here. The Times dropped a hint in its Monday story when they reported, “The new timetable means that Mr. Trump was seeking a deal at the time he was calling for an end to economic sanctions against Russia imposed by the Obama administration. He was seeking a deal when he gave interviews questioning the legitimacy of NATO, a favorite talking point of President Vladimir V. Putin of Russia. And he was seeking a deal when, in July 2016, he called on Russia to release hacked Democratic emails that Mr. Putin’s government was rumored at the time to have stolen.”

But that only scratches the surface. The real reason Trump has Giuliani out there trying out new lies to cover up old truths was revealed in what Cohen himself told prosecutors about his negotiations for the Moscow Trump tower. He said they began in 2015 and ended on June 14, 2016. But it’s known that Trump had been pursuing a Moscow deal for at least a decade. According to the Atlantic, he first traveled to Moscow to look at locations for a hotel in 1987. He tried again in 1996, and again in 2008, and yet again in 2013, when he was in Moscow with his Miss Universe pageant.

That was when he made the connection that would trap him in the impenetrable fog of admissions and denials we’ve seen over the past few days. His partner in the Miss Universe pageant was a good buddy of Russian President Vladimir Putin: Aras Agalarov, a prominent real estate developer in Moscow. Trump and Agalarov allegedly talked about partnering on a Trump Moscow tower at the time of the Moscow pageant.

Recognize that name, Agalarov? It was the mega-developer’s son, wannabe Russian pop star Emin Agalarov, who was the connection behind the now-infamous Trump Tower meeting on June 9, 2016.

“The Crown prosecutor of Russia met with his father Aras this morning and in their meeting offered to provide the Trump campaign with some official documents and information that would incriminate Hillary and her dealings with Russia and would be very useful to your father. This is obviously very high level and sensitive information but is part of Russia and its government’s support for Mr. Trump — helped along by Aras and Emin.”

On June 7, Donald Trump Jr. scheduled a meeting with a “Russian government attorney” who was flying in from Moscow, according to an email he received from Rob Goldstone.

Also on June 7, Donald Trump gave a speech promising to reveal “all of the things that have taken place with the Clintons” the following week, a suspected reference to the “dirt” Russians were promising on Clinton.

On June 8, Goldstone emailed Don Jr. offering help to the Trump campaign from the Russian media company, Vkontakte, or VK, the Russian equivalent of Facebook.

Also on June 8, Russian intelligence agents working for the GRU launched “dcleaks.com,” a public website that would be used over the next several months to release stolen Democratic Party emails. The agents responsible for “dcleaks.com” have been indicted by Special Counsel Mueller.

The next day, on June 9, Don Jr., Jared Kushner, and Russia-connected campaign manager Paul Manafort met with six Russians in Don Jr.’s office in Trump Tower. The person who professed to represent the Russian crown prosecutor was Natalia Veselnitskaya, a Russian lawyer who had been involved in lobbying against the Magnitsky Act, a law passed during the Obama administration which imposed sanctions on numerous high-level Russian government officials and businessmen.

Veselnitskaya was recently indicted by prosecutors in the Southern District of New York with trying to quash an investigation into a wealthy Russian businessman for money laundering. She brought with her to the Trump Tower meeting two very interesting Russian compatriots: Rinat Akhmetshin was a former Russian intelligence agent now working as a lobbyist against the Magnitsky Act; Ike Kaveladze was a vice president of Aras Agalarov’s Moscow development company who had been investigated by the General Accounting Office for setting up at least 2,000 Delaware corporations and bank accounts for Russian entities without knowing their identities or what the accounts were to be used for, a suspected scheme by wealthy Russians to launder money and avoid taxes (Kaveladze was not charged with committing a crime).

So into Don Jr.’s Trump Tower office on June 9 walked two Russians heavily involved in lobbying against sanctions imposed by Obama on Russians, and one Russian connected to a real estate company in Moscow that Trump had talked to about a Moscow project. The subject of the meeting was “information that would incriminate Hillary Clinton” that would come from the “Russian government.”

On June 14, the Washington Post reported that “Russian government hackers penetrated the computer network of the Democratic National Committee and gained access to the entire database of opposition research on GOP presidential candidate Donald Trump.”

Later the same day, Michael Cohen met with Trump business associate Felix Sater in the lobby of Trump Tower and told him he was canceling a planned trip to Moscow on the Trump tower project. Cohen was convicted of lying to the Senate Select Committee on Intelligence about his plans to travel to Russia for the Trump Moscow project, when in fact, he and Sater had exchanged “numerous messages” about the trip, including several travel documents Cohen would have to complete in advance of the trip, according to Mueller’s indictment of Cohen.

The indictment also states that Cohen discussed with “Individual 1” (identified as Donald Trump) the possibility of Trump traveling to Russia to discuss the Moscow project.

Discussions between Cohen and Sater about traveling to Moscow for the Trump project began on May 4, according to the Mueller indictment.

On May 3, 2016, Trump became the presumptive nominee of the Republican party when he won the Indiana primary, and his last two opponents, Ted Cruz and John Kasich, withdrew from the race.

It seems clear as spring water that the minute Trump effectively became the Republican nominee for president, he started being taken seriously in Moscow, and the tower deal picked up steam. That lasted right up until the day it was revealed that the Russians had hacked Hillary’s emails, when it became too dangerous for Trump to be associated with Russia in any way.

Trump denied any connections at all with Russia or Russians throughout the campaign and after his inauguration as president. He repeatedly and specifically denied that he had any “deals” or “investments” or “possible deals” in Russia.

That’s why you’re seeing Giuliani tie himself in knots trying to deny stories that Trump was involved with Cohen in any way with the Moscow project, or that he ordered Cohen to lie about it to the Congress. Every time you see Trump or one of his lawyers execute a Double Reverse Triple Salchow, it’s because they’re jumping over the truth: that Trump was neck deep in connections to Putin.. That is why Trump is so panicked by any mention of the Moscow Trump tower. It’s evidence that his deal with Putin was a two-way street.

Putin wanted sanctions lifted and a puppet in the White House. Trump wanted money and to win the presidency. It was a deal neither of them could resist.