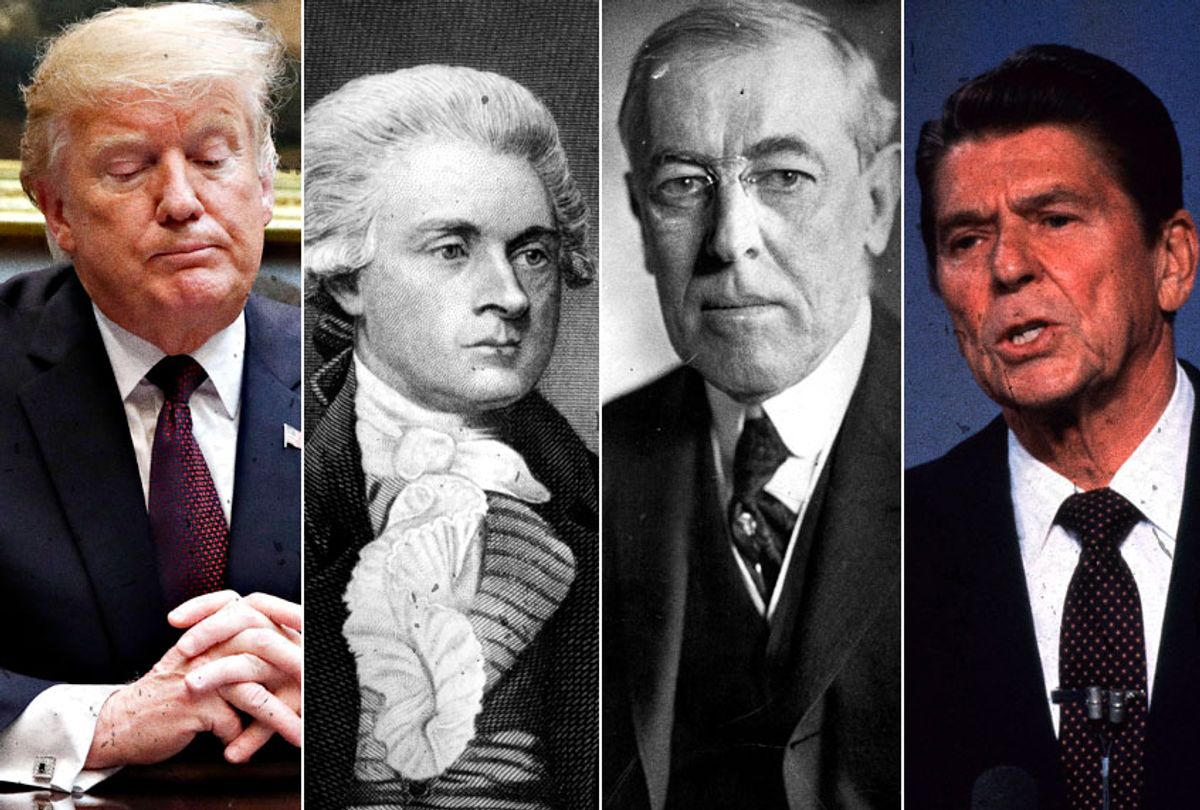 In light of President Trump's decision to delay his State of the Union address until after the government shutdown has ended, an inevitable question arises: Has this kind of finagling over the president's big annual speech to Congress ever happened before?

The answer is no, although it's important to note that State of the Union addresses have not always existed in the form we're accustomed to seeing today. Thomas Jefferson established the precedent in 1801 of delivering an address to Congress -- but in writing, not in person. It wasn't until Woodrow Wilson in 1913 that presidents began to trek to Capitol Hill to deliver the big speech live.

"Wilson is credited with transforming the annual message from a kind of rote listing of accomplishments and issues to a defining moment for the ruling party's agenda," Gautham Rao, a history professor at American University, told Salon by email.

[Calvin] Coolidge gave the first address on radio but he was a bit of a bore so this is easy to overlook. After Wilson, [Lyndon B. Johnson] marks the next major milestone for making the speech an important media event — delivering the speech at a time in the evening to capture the most viewers. I'd say this is still the reigning model and the one that makes the pomp, circumstance and location of the event all the more important.

So the long answer in my view: yes, there have been moments where there were important transformations. But I cannot think of any precedent for the kind of showdown we are witnessing about where the speech is to be delivered, and what the speech portends for the political future.

John T. Woolley, a professor of political science at the University of California, Santa Barbara, spoke specifically about the idea of a House speaker uninviting a president. He also wrote to us by email.

Never has a President been "uninvited" to give the SOTU in person. There is at least one recent instance of a Presidential speech to a Joint Session being rescheduled. In that 2011 case [Barack] Obama was originally proposing the night of a GOP [presidential] candidate debate; and [House Speaker John] Boehner countered with the night of the first game of the NFL season.

At that time, the Senate Historian said he was aware of no examples of Presidents requesting to address a joint session and being rebuffed. Of course, normally private checking between WH and Congressional leaders would take place — which seems to have been true in this case as well. Note that [Nancy] Pelosi has not uninvited the President permanently, but has proposed to reschedule. And rescheduling is not unprecedented.

Woolley also identified one feature of the current fiasco that makes it distinctive.

What IS really quite important about this moment is that the delay is being linked to a larger policy fight (the shutdown; the wall). The Speaker is denying the President this symbolic moment to make his case with all the ceremony of the nighttime Joint Session and television and balcony guests. So one can imagine in future instances when there is some really sharp policy dispute taking place that members of Congress decide to deny the President the use of Congress as a backdrop and forum in which to speak.

Plus it is almost certainly going to set a new precedent in terms of when the SOTU takes place. Our data show that starting with Wilson, spoken SOTU have fallen between Dec. 2 (before the 20th Amendment) and Feb. 12. Out of 85 events, only nine have been in February -- only one later than [Feb. 6].

Allan Lichtman, a distinguished professor of history at American University, also argued that the fiasco over Trump's State of the Union should be understood within the broader context of the government shutdown.

"It's really rooted obviously in the government shutdown and I would, like most Americans, assign blame for the shutdown to the president," Lichtman told Salon.

"He was quite explicit in saying he'd be proud to shut down the government in order to get his wall. That's no way to conduct a government. You don't hold the federal workforce hostage, you don't torpedo the economy, you don't cause distress for people because you want a particular policy or political objective to be achieved. So clearly the blame for the shutdown rests squarely with the president, and he said so himself."

Earlier in the interview, Lichtman elaborated on the historic nature of the current situation.

This doesn't mean that every State of the Union address since Wilson has been delivered in person, Lichtman added. Harry Truman, Dwight Eisenhower, Richard Nixon and Jimmy Carter all delivered written addresses for various reasons. "There's nothing in the Constitution that says it has to be a speech," Lichtman said. "But we've never seen these kinds of sparks flying between a president and a Speaker of the House over a State of the Union before."

Lichtman also noted Trump's promise that he wouldn't blame Democrats for the shutdown, which he offered when meeting with incoming Speaker Pelosi and Senate Minority Leader Chuck Schumer last month.

"Of course, what Donald Trump says one day is often inoperable not just the next day but the next hour," Lichtman said. "He has tried to shift blame to the Democrats. It doesn't work. You only have one president, and as Herbert Hoover once said, the president gets the credit for the sunshine and the blame for the rain, and shifting it to someone else never works."