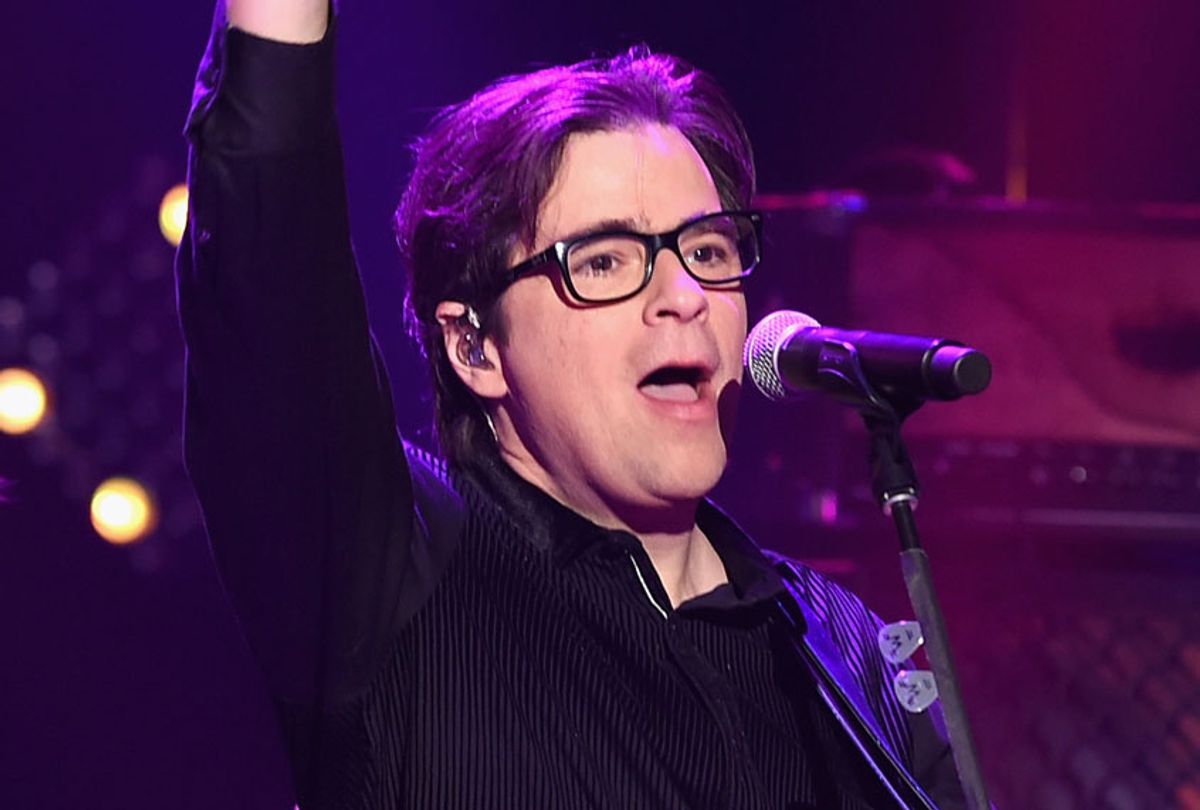 I didn't think it was possible to feel any more seen than I did the moment on "Saturday Night Live" last week when a character played by Kenan Thompson declared, "I'm Gen X. I just sit on the sidelines and watch the world burn." But then a few days later, Weezer released a surprise "Teal Album" composed entirely of cover songs. (Their "Black Album" of new material is still slated for March.) And if there's a better summation of my goofy-ass, overlooked demographic than Rivers Cuomo and crew crooning "No Scrubs," I'd like to hear it.

We Gen Xers had already slunk into our middle child status long before our baby siblings, the Millennials, came along. I recall being in my early twenties and having a ten years-older colleague inform me that his generation and his children's generation were going to run the world, while mine would be remembered for nothing special. I assumed he hadn't yet discovered "The Real World" or Wreckx-n-Effect. Yet I also accepted he was probably on to something.

Just start with the terminology. "Boomer" and "Millennial" both roll enticingly off the tongue; they connote seismic shifts and ambitious scale. In contrast, before my peers were crowned Gen X — ie "Generation Big Fat Zero" — we were called "Slackers," inspired by the holy trinity of Marty McFly, Superchunk and young Richard Linklater's seminal portrait of quirky, pop culture obsessed randos. We might as well have been called "Sad Trombone Sound." You know the kid who had the receding hairline while he was still in high school? That is us.

No single individual or image or sound can define an entire generation. I may think of Gen X as simultaneously Sean "Diddy" Combs and Matt Parker and Trey Stone and Christy Turlington, but it's also definitely Brett Kavanaugh, a man who even today looks straight out of central casting for the role of antagonist in a John Hughes movie. The Pew Research Center described my demo in 2014 by saying, "One reason Xers have trouble defining their own generational persona could be that they’ve rarely been doted on by the media." Yet I believe one can find some common themes.

Just look up the symptoms of "middle child syndrome" some time. They include "low self-esteem, attention-seeking, and trust issues." Now look at a generation whose defining classics include songs like "Loser" and "Creep" and "Ironic" and "Unpretty" and "Sabotage." Movies like "Reality Bites." Memoirs like "Prozac Nation." Flannel, in general. In the immortal words of Ross Gellar, I'm fine.

The upside of being the middle child is that you get to hone your Daria-like detachment for decades, until you arrive in the state of pure recursive sarcasm that is a Weezer yacht rock album cover. Weezer, a band of winkingly dorky dorks who launched into fame with a song that featured the word "homies" in the first line and a music video that was a parody of "Happy Days," a sitcom about the teen years of the first-wave Boomers.

Twenty-five years later, here we Xers are, creaking off to our parents' funerals and our children's graduations in our Bikini Kill t-shirts. We have made it deep into adulthood without ever enjoying the prosperity of the generation before us, secure in the knowledge that we will outpace our Millennial friends in at least one regard — being first to inherit a depleted Social Security system. Do we feel old? I don't know, haven't we always? Haven't you seen "Clerks"?

Last week I was out with a friend who told me about a Pixies show he'd recently seen. When I asked him how it was, he replied, "Great. My feet hurt." I promise he'd have had the same response in 1992. It might have been shocking for Don Henley the first time he saw a Deadhead sticker on a Cadillac, as it no doubt must feel to transform from, say, long-haired anti-war protestor to Fox News addict. But it comes as no such revelation to for me hear The Cure wailing "Boys Don't Cry" in Target while my peers are strolling through the fiber aisle. Hello, we've been here along. For many of us, we are as we've ever been, grumpy but bemused.

So when Weezer headlined a Carnival Cruise a few years ago, it felt one part droll commentary and one part, "Yeah, but all inclusive is nice." And when a Cleveland teen — and then the entire Internet — got a notion that the band ought to cover Toto's early '80s homage to an entire continent, Weezer cheerfully obliged last year with their version of "Africa," complete with a Weird Al music video to accompany it. And when they now offer their spin on "Take On Me," they do so in the full and complete knowledge that no one was taking Norwegian synth pop terribly seriously the first time around. When I listen to it, I am practicing a skill set my era can truly claim to have brought some real innovation to: Uninhibitedly enjoying cheesy things by being super conspicuous about how cheesy they are. Trust me. I used to serve Mentos Jell-O shots at my parties.

Have we now come full circle, or have we just always been standing in place, wearily accepting our Jan Brady status in the societal pecking order? I can't tell. But there is a certain sweet relief in being part of the group that doesn't bear the full responsibility for screwing the planet up or the entire onus of fixing it. History may indeed judge us for sitting on the sidelines and watching the world burn, but at least we kept a sense of humor, and knew ourselves well enough to prefer singing "Everybody Wants to Rule the World" to actually believing it.