Trump has no idea how to deal with women who aren't there to serve him. Pelosi is working that perfectly 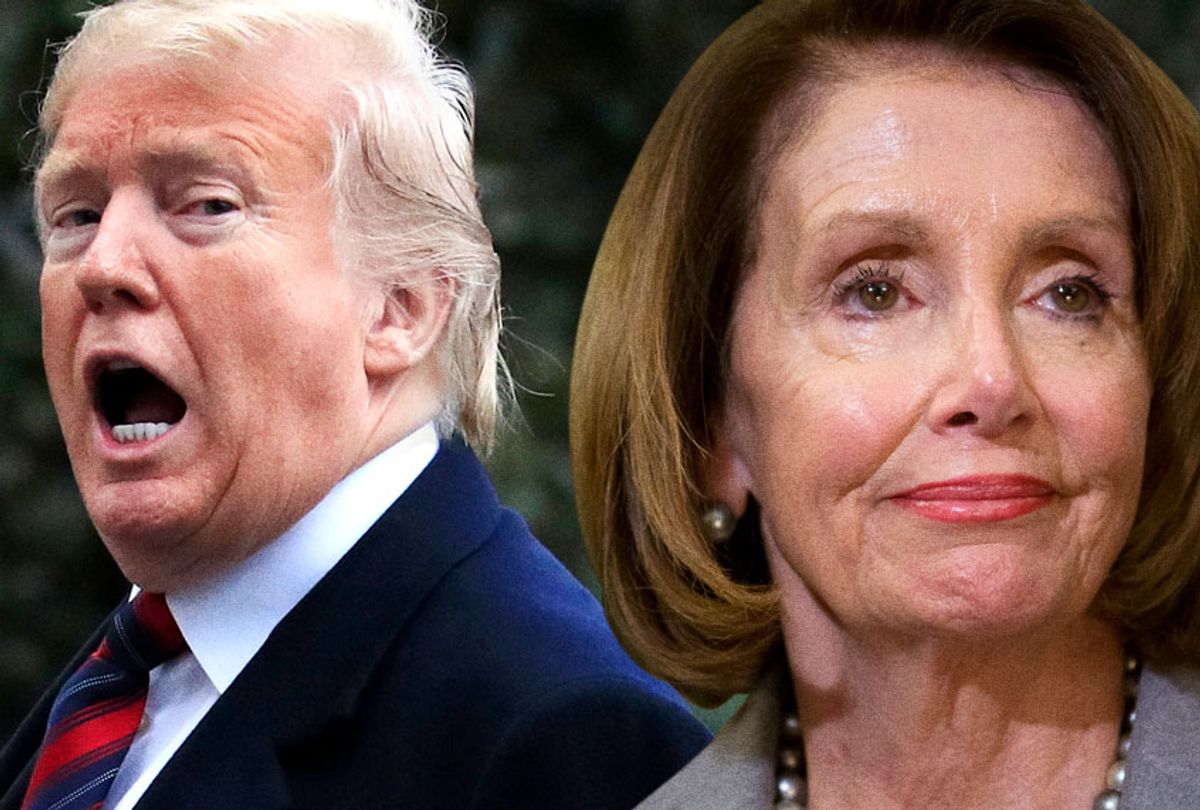 From the moment Donald Trump was elected president, the face of the resistance has been female: the Women's March, the #MeToo movement, the surge of women who ran (and won) as Democratic candidates, the women running Indivisible and other organizing groups around the country.

So it's fitting that the face of the elected officials who are now empowered to check Trump — the Democratic majority in the House of Representatives — is a woman, Speaker Nancy Pelosi.

Pelosi is a compelling foil for Trump in many ways, bringing experience and intelligence to bear in a battle against a man whose overconfidence is only matched by his inexperience and incuriosity. But her gender adds an interesting dimension to the drama, creating a far different dynamic than would spool out if the Democratic leader were, as most members of Congress still are, a man. Many people in politics and media are still not used to female power, and Pelosi's novel position, while creating some pointless problems for her, also gives her some surprising advantages.

This was made quite clear in this week's showdown over the State of the Union address.

No doubt Pelosi's prowess at Capitol Hill politics was on full display in her choice to deny Trump his chance at delivering the annual speech until he decides to end the shutdown. The move showcased Pelosi's talent at reading people and figuring out what actually motivates them. Trump will never be moved with appeals to decency, as he has no decency and doesn't even pretend to care about it. But taking away opportunities for him to preen and brag before a national audience hits him where it hurts.

More subtly, however, Pelosi is also using her gender to put Trump — who is visibly unnerved by having any woman around that isn't clearly there to serve him, sexually or otherwise — on his heels. Trump is already a terrible politician with no discernible deal-making skills, and he's clearly rattled by Pelosi in the same way that he was rattled by Hillary Clinton during the 2016 presidential debates. So he's avoiding direct conflict and hiding in the White House sending out tweets, rather than deal with this woman who unnerves him by merely existing and refusing to be subservient.

That's likely why, as Angus Johnson writes in the Washington Post, Trump folded so quickly after Pelosi shot down his effort to go forward with the  State of the Union, despite her earlier "suggestion" earlier than he should not. Trump likes to bellow threats and posture like a big man in public, as Johnson points out, but in truth he's a coward who retreats from real conflict.

"Trump hates leaving his home turf. Hates it. He only emerges from his cocoon when he’s promised he’ll be coddled and catered to, and frequently bails even then," Johnson writes.

This attitude intensifies when Trump is dealing with women, as he made quite clear to Billy Bush on the infamous "Access Hollywood" tape, when he said he enjoyed forcing himself on women who "let you do it"  because he's "a star" -- and because their ability to make a living depended on pleasing him.

Pelosi, however, doesn't have to let Trump do anything. Faced with this highly unusual situation (for him) of facing a woman who isn't being paid to cater to his whims, lost his bearings and was forced to back down quickly. He's spent the hours since then holed in the White House, watching Fox News and tweeting out whatever the network is currently going on about.

Earlier this month, Pelosi told the "Today" show that she isn't sure Trump "knows how to deal with women in power and women with strength," which was generally reported as if it were a straightforward expression of uncertainty. In truth, that was just Pelosi throwing shade. Of course she's sure: Trump has no idea how to deal with women with power. She's using that to great effect to keep him unsettled, angry and on the defensive.

As Alex Shephard at the New Republic has pointed out, Pelosi, along with Senate Minority Leader Chuck Schumer, "bamboozled [Trump] into taking credit for the looming shutdown," something that the media has been mindful to remember no matter how often Trump tries to blame the Democrats.

That White House meeting, as Shephard notes, was an apparent ambush. Pelosi and Schumer thought it would be private, but Trump invited the cameras in. That suggests that Trump or his staff knew that he'd be on shaky ground dealing with the newly empowered Pelosi, and tried to draw on his history as a reality TV star to give him some leverage. But without the talented team of editors from "The Apprentice" to create the illusion of Trump being ingenious and masterful, he instead came off as a petulant child unable to converse with adults on equal terms, especially adult women. Which is of course an accurate portrayal.

Pelosi was able to manipulate Trump's gender insecurities throughout that encounter, situation, telling him on camera, "Don’t characterize the strength that I bring to this meeting" and then mocking him after the meeting for using the border wall demand as a way to bolster his "manhood."

Of course, Pelosi faces many of the same obstacles that Hillary Clinton faced in 2016 run, including the fact that some powerful people in the media and even in her own Democratic coalition share Trump's discomfort with women in power.

As Rebecca Traister of New York magazine wrote in response to the widespread outing of sexual harassers in media in 2017, "We see that the men who have had the power to abuse women’s bodies and psyches throughout their careers are in many cases also the ones in charge of our political and cultural stories."

The result, as Jill Filipovic wrote in a follow-up piece for the New York Times, was that the "same simmering disrespect and impulse to keep women in a subordinate place" that fuels so much sexual harassment was also evident in the media coverage of Clinton. That in turn convinced much of the public — based on essentially no actual evidence — that Clinton was untrustworthy and corrupt.

To be certain, many of the worst offenders in media, such as Charlie Rose and Matt Lauer, have since been drummed out of their powerful positions after horrifying stories of sexual harassment came out about them. But there's still a widespread distrust of women in power and eagerness to take them down a notch, and Pelosi must contend with that as well.

The over-hyped efforts of a mostly male coalition of centrist Democrats to block Pelosi from regaining the speakership after the midterm elections also reflected this sexist bias. That half-baked campaign, which featured no alternative candidate and no real effort at coalition-building, would have gotten no real media traction if the targeted politician had been male. But Pelosi's gender dramatically amplified interest in the story, as the possibility of seeing a powerful and ambitious woman laid low continues to have a powerful allure in our male-dominated media landscape.

The good news is that Pelosi seems to have a knack for using this tendency to underestimate women to her advantage. Certainly that's true with Trump, who was foolish enough to think sending a petulant letter demanding his State of the Union address would be enough to convince Pelosi to back down. That move ended up making Trump look even more foolish than usual, like a bully who talks big but can't make good on his threats.

Even the fact that Trump has maintained this shutdown for so long is not a testament to any personal strength in Trump. It's simply an artifact of the lengths that Senate Majority Leader Mitch McConnell is willing to go to exert power, and nothing more. Without McConnell shielding him, Trump quite likely would have folded long ago.

How this ends remains to be seen. But that there's any hope of a resolution at all is due largely to Pelosi's ability to see through Trump's posturing to see the insecure brat that he actually is. Throughout this, she has shown that we need more women in power not just because of fairness, but because they bring different perspectives. Trump likes to play macho games, and it takes a woman to disrupt his boys club strategy.