The shutdown, which entered Friday into its 34th day, became the longest budget impasse in U.S. history 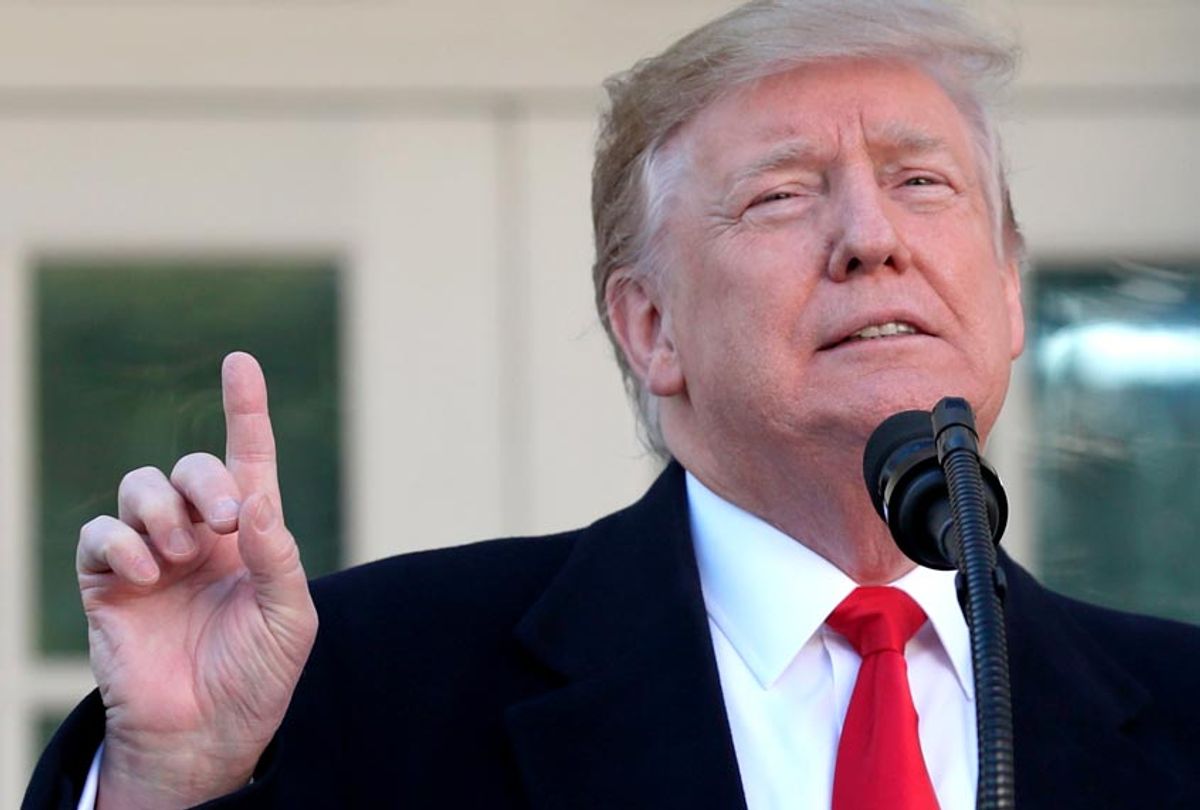 Donald Trump speaks about the government shutdown on January 25, 2019, from the Rose Garden of the White House in Washington, DC. (Getty/Alex Edelman)
--

[UPDATED 21:28] President Donald Trump and congressional Democrats on Friday reached a deal to reopen the government for three weeks until Feb. 15, while negotiations continue over border security and a spending package that includes the $5.7 billion the commander-in-chief has claimed is necessary to construct a "wall" along the U.S.-Mexico border.

The shutdown, which began shortly before the Christmas holiday and entered into its 34th day Friday, became the longest budget impasse in U.S. history.

The agreement marks a significant victory for House Speaker Nancy Pelosi (D-Calif.), who has previously advocated for opening the government amid ongoing negotiations about border security. It also marks a pivotal reversal for Trump, who previously said he would veto any bill that does not include border wall funding and threatened to declare a national emergency if Democrats do not budge.

"I am very proud to announce today that we have reached a deal to end the shutdown and open the federal government," Trump announced outside the Rose Garden on Friday. "Because everyone knows I have a very powerful alternative, but I didn't want to use it at this time. Hopefully, it will be unnecessary," he continued, referencing his threat to to make an emergency declaration to build the border wall he has long promised his supporters.

In a joint press briefing, Pelosi and Senate Minority Leader Chuck Schumer (D-N.Y.) congratulated Trump on agreeing "to our request to open the government and then debate border security," which he called "great news for the 800,000 federal workers and millions of Americans who depend on government services."

"We expect the continuing resolution to clear the Senate and clear the House this afternoon and be signed by the president today," Schumer added.

"The American people do not like it when you throw a wrench into the lives of government workers over an unrelated political dispute," the New York Democrat said. "Hopefully now the president has learned his lesson."

Pelosi added, "Disagreement in policy should never be a reason to shut down government."

During his Friday remarks from the Rose Garden, Trump thanked the hundreds of thousands of federal workers either furloughed or going without pay and their "amazing families who have shown such extraordinary devotion in the face of this recent hardship."

"You are fantastic people. You are incredible patriots. Many of you have suffered far greater than anyone but your families would nowhere understand. And not only did you not complain, but in many cases you encouraged me to keep going because you care so much about our country and its border security," Trump continued. (He has previously shrugged off the government shutdown's impact on unpaid federal workers, claiming they "are Democrats.")

He added, "I will make sure that all employees receive their back pay very quickly or as soon as possible. It'll happen fast."

Trump said he will ask Senate Majority Leader Mitch McConnell (R-Ly.) to "put this proposal on the floor immediately."

"After 36 days of spirited debate and dialogue, I have and heard from enough Democrats and Republicans that they are willing to put partisanship aside — I think — and put the security of the American people first," he continued. "I do believe they're going to do that."

"Over the next 21 days I expect the democrats and republicans will operate in good faith," Trump added. "This is an opportunity for all parties to work together for the benefit of our beautiful nation."

"Many disagree, but I really feel that working with Democrats and Republicans we can make a truly great and secure deal happen for everyone," he added. "Walls should not be controversial."

"Walls work. They do work. No matter where you go, they work," Trump said.

The president then used fear as a motivator to rally support for his long-promised wall along the southern border, as he argued the wall was necessary to curb illegal immigration, drug trafficking and crime. Democrats, who seized control the House of Representatives in November during the 2018 midterm elections, have denounced his demand, calling the wall immoral, ineffective and costly. The Senate on Thursday rejected two measures to end the shutdown.

Trump on Thursday said he would support a "reasonable" agreement brokered by lawmakers in the upper chamber, but that he would use "other alternatives" to jump-start wall construction "if I have to."

Although Trump appears to have caved to Democrats demands by reaching a tentative deal to open the government while border wall negotiations continue, he did not back off his demand to secure $5 billion to construct the wall.

"We really have no choice but to build a powerful wall or steel barrier," he said. "If we don't get a fair deal from Congress, the government will either shut down on Feb. 15 again or I would use the powers afforded to me under the laws and the Constitution of the United States to address this emergency."

"We will have great security, and I want to thank you all very much," he concluded. "Thank you very much."

Notably, if Trump declared a national emergency, it would likely face court challenges. Republicans lawmakers and White House officials, including Jared Kushner, have indicated they would prefer Trump not to rely on such an option to build the wall because of the legal challenges that would follow.