Why the outpouring of affection for Bush? 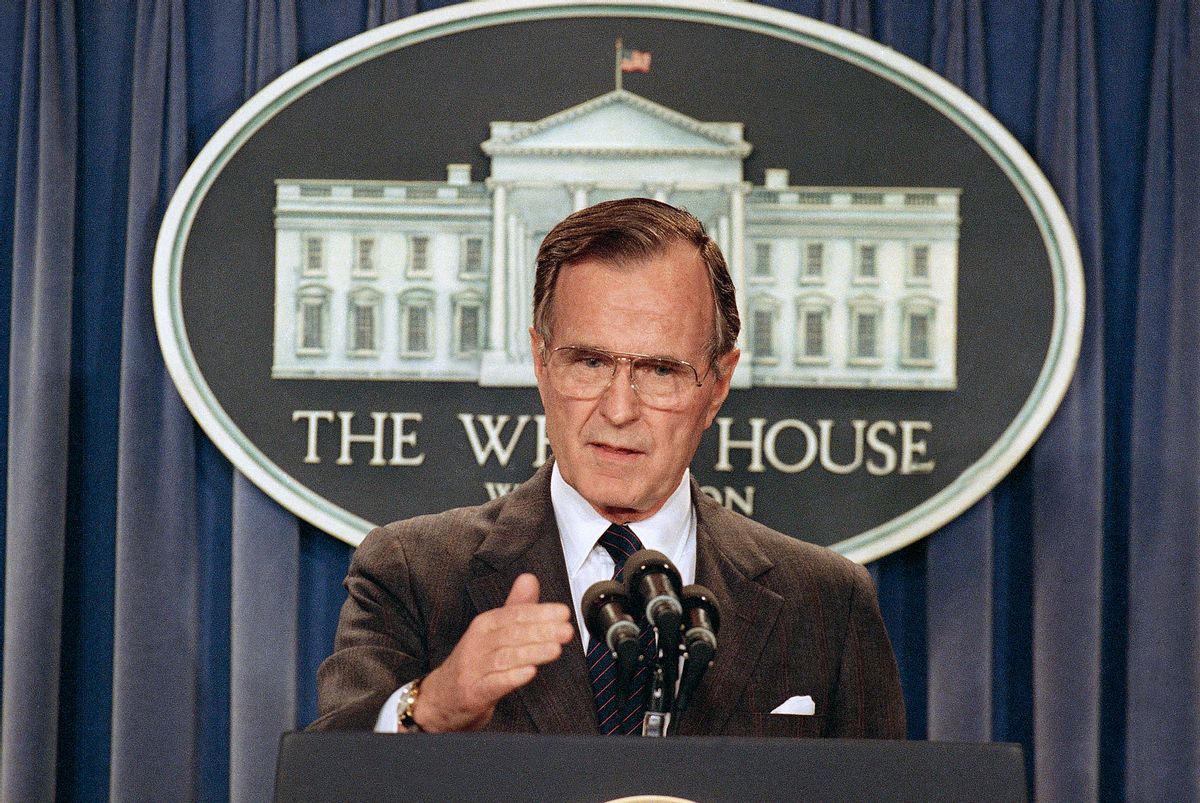 Last month, 19 senior CIA officials, current and former, signed a statement lauding the late president George H.W. Bush, who served as CIA director for one year. The agency put out a complimentary “unclassified” video about his service to the agency. Langley’s Twitter feed featured 11 straight days of photos and anecdotes about Bush’s warm relationship with America’s $15 billion a year spy service.

After his death, Bush was memorialized as a consequential one-term president. He presided over the peaceful end of the Cold War and waged two other wars (in Kuwait and Panama). He was praised for his civility even while he played hardball racial politics. But why he was so beloved by the CIA was curious.

Bush’s time as director was brief. He never served in the CIA as operations officer or analyst. As far as we know, he never ran an operation or an agent. He never wrote a situation report or an after-action memo or a National Intelligence Estimate. He didn’t hire or cultivate exceptional intelligence officers. As director, Bush oversaw no known operations regarded as a huge success.

CIA director Richard Helms, who died in 2002, had a much longer and more consequential CIA career than Bush, and he was not so honored. Why the outpouring of affection for Bush?

That question prompted me to file a Freedom of Information Act lawsuit with the James Madison Project in Washington, D.C., seeking records on a possible connection between the late president and the CIA in the 1950s and 1960s beforehe became CIA director and U.S. president.

The complaint, filed in Washington federal court, seeks records of Bush and Zapata Offshore, the oil drilling business that he ran before he went into politics. On December 31, the CIA rejected my request for expedited handling of the FOIA request. I am pursuing the lawsuit with an amended complaint.

From the public record, it seem Bush’s service to the CIA was political, not operational.

Bush became director in November 1975 after President Ford fired his predecessor William Colby. He assumed the position when morale was terrible. Congressional investigators and the Washington press corps clamored to investigate the agency. An assassin, never identified, had just gunned down Richard Welch, station chief in Athens.

Bush and the agency’s defenders decried Welsh’s death as a consequence of public exposure of the agency’s illegal operations. That insinuation was false. Welch’s identity and address were already known in Athens, but the claim put the agency’s critics on the defensive.

Bush did not flinch from the task of putting the best face on the agency’s dirty work.

In September 1976, the CIA’s liaison partners in the Chilean intelligence service assassinated a former defense minister on Massachusetts Avenue in the heart of Washington. It was the most significant terror attack in Washington until 9/11. Not only had the CIA failed to prevent it, but warm relations with Chile had practically condoned it.

In October 1976, Luis Posada Carriles, a CIA-trained anti-Castro operative (code-named AMCLEVE-15), helped plant a bomb on a Cuban airliner, killing 73 people. It was the most significant aerial terror attack in the Western Hemisphere until September 11. The agency’s role in the attack wouldn’t be learned for years.

It was a decisive year for the agency. In the words of the agency’s online biography,Bush “established himself as a leader who restored the morale and reputation of the CIA.”

In the White House

Bush was elected vice president in 1980. He put his intelligence experience to use when President Reagan’s plans to intervene in the civil wars of Central America were blocked by a Democratic Congress. The White House mobilized to evade the ban on CIA support for Nicaraguan counterrevolutionaries by selling arms to Iran.

When the scheme was exposed in 1986, the Iran-Contra scandal engulfed Washington. Reagan’s popularity cratered. Congress and the media again launched wide-ranging investigations of the agency.

Bush managed to stay above the fray and won the presidency himself in 1988. in December 1992, in one of his last acts as president, he pardoned three top CIA officials facing criminal charges for their role in the Iran-Contra conspiracy.

The patrician president had saved the agency a second time. If Reagan-era operations chief Clair George and division chief Dewey Clarridge had gone on trial for conspiracy and obstruction of justice, as charged by Special Prosecutor Lawrence Walsh, the public would have learned of a plot against America: how senior undercover officers conspired to thwart the will of Congress in violation of the agency’s charter and the U.S. Constitution.

Without the pardons, Bush himself would have faced further investigation for his shadowy role in the conspiracy, and the agency would have faced renewed scrutiny. Support might have grown from the agency’s abolition, as proposed in 1991 and 1995, by Sen. Pat Moynihan, chair of the Senate Intelligence Committee.

The clandestine service survived. In 1999, the CIA named a building after Bush, an extraordinary honor for an outsider.

Or was he an outsider?

A handful of declassified records suggest that Bush’s relationship to the agency might have run deeper than his overt roles as director, vice president, and president. The records, which I believe were first reported in Russ Baker’s 2009 book, "Family of Secrets," went unmentioned in the recent media coverage of Bush’s death.

From 1954 to 1966, Bush ran Zapata Offshore, a Houston-based oil drilling business that supported petroleum exploration in the Caribbean. His business partner was an engineer from MIT named Thomas J. Devine.

According to a 1968 memo, Devine was a “cleared and witting commercial asset” for the agency from 1954 to 1966. (Bush left Zapata Offshore when he went into politics in 1966.) In the memo, a senior agency official describes Devine as “a personal friend and unofficial foreign affairs advisor to Representative George Bush of Texas.”

In a 1964 report, Devine is identified by the cryptonym WUBRINY/1. The memo states he took a meeting in the offices of a company identified only by the code name WUSALINE.

(CIA code names in those days consisted of a digraph referring to a country and a randomly selected word. WU signified operations in Haiti, where Zapata Offshore did business.)

The authenticated records are available from the Mary Ferrell Foundation online archive. The foundation’s cryptonym database compiles the true identities of code-named CIA assets. The database is run by Bill Simpich, a retired civil rights litigation in the Bay Area, who reminded me about the records after Bush’s death.

The documents raise the questions: Was Bush also a “cleared and witting asset”? Does WUSALINE refer to Zapata Offshore?

"We never talked about it"

I spoke with Tom Devine, now 92 years old, by telephone after Bush’s passing. I asked him if the late president was also a witting asset of the CIA.

Asked to characterize Bush’s relationship with the agency, Devine said he did not know how to answer the question.

Asked if Zapata Offshore was a CIA proprietary, Devine said flatly, “no.”

Devine rejected the charge, made in an online publication, that he used CIA money to start Zapata Offshore. Devine said he worked for CIA briefly and decided to pursue a different career with his MIT engineering degree. He joined Zapata in 1954, when Bush was already a vice president of the company.

“Zapata existed when I was hired,” he said. “So I couldn’t have used CIA money to start it.”

Devine’s comments indicate that if Bush had a formal relationship with the CIA before he became director, he held that information closely.

“WUSALINE could refer to Zapata,” Simpich, the cryptonym expert, commented. “It could refer to a CIA holding company that encompassed Zapata and other proprietaries. We don’t have enough records to figure it out.”

The larger issue concerns the CIA and the presidency.

Did the agency recruit and use Bush as an intelligence asset without disclosing the fact to voters when he was confirmed as director in 1976 or when he was running for president in 1980, 1988, and 1992?

That’s the question the lawsuit seeks to answer.