Donald Trump has a strategy: He's using the border wall fight to escape from justice

The shutdown battle delayed congressional investigations for weeks. So why wouldn't Trump want to do it again? 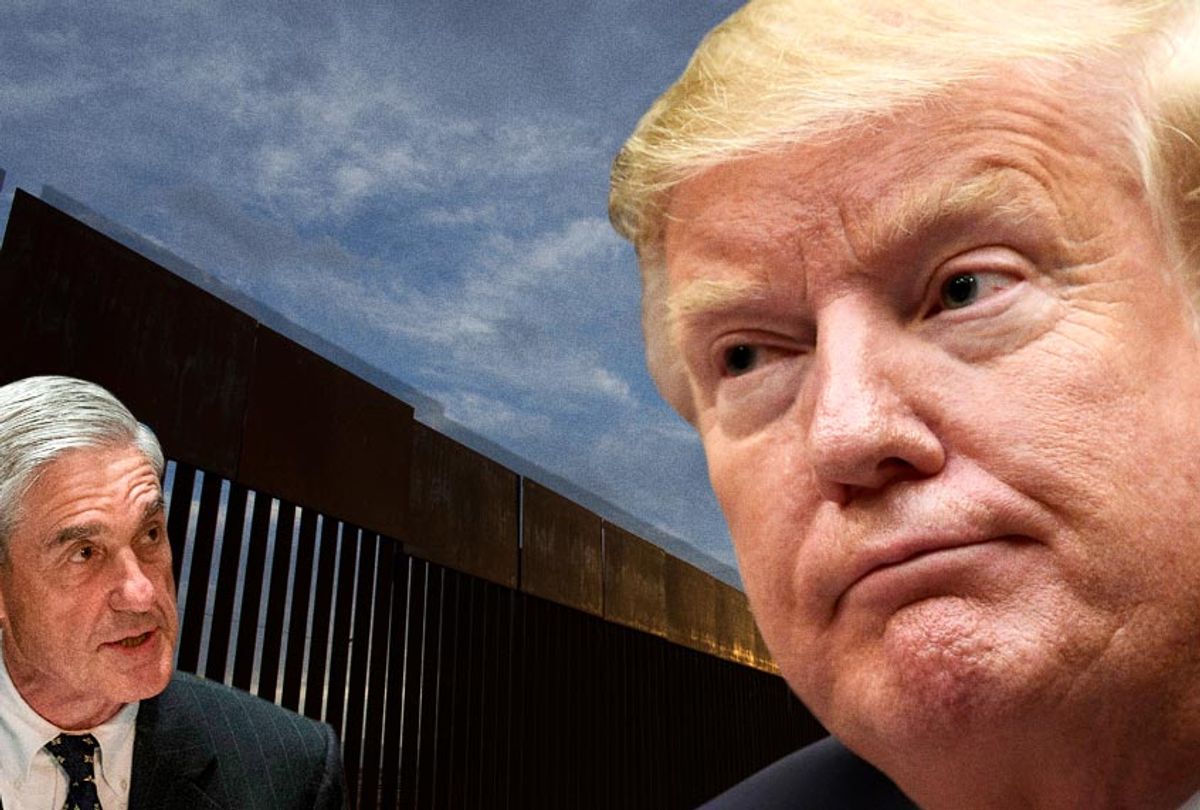 On Friday, Donald Trump finally caved on his 35-day shutdown, agreeing to reopen the government without getting a single dollar of the funding for a border wall that he had insisted was such an emergency it was worth wrecking the economy to get it. The president's capitulation was rightly greeted as a major triumph for House Speaker Nancy Pelosi, who kept the newly elected Democratic majority united in opposition to Trump's demands and finally broke his will.

And while there will ostensibly be a debate over border security, even Trump seems to grasp that Congress is about as likely to give him wall funding as Stormy Daniels is likely to offer to become his fourth wife. That's why there was a shutdown -- which began, let us remember, when Republicans controlled both houses of Congress -- in the first place: The wall is a bad idea, and neither party really wants to expend any effort to make it happen.

But despite being handed such a massive humiliation, Trump so far seems unable to do the smart thing and slink away in shame, pretending this never happened. Instead, he spent the weekend demagoguing on Twitter about the wall, trying to make the inane slogan "build the wall and crime will fall" happen. Worse yet, the administration signaled that Trump isn't done with blackmail strategies.

"21 days goes very quickly," Trump tweeted threateningly on Saturday morning. "Will not be easy to make a deal, both parties very dug in."

In an interview with the Wall Street Journal on Sunday, Trump declared that shutting down the government again in three weeks, when the continuing resolution runs out, is "certainly an option". He also has been pushing the idea, as has his acting chief of staff, Mick Mulvaney, that the White House is still considering declaring a national emergency as a strong-arm tactic.

Trump is a braggart who likes to talk tough and make big promises (and threats) without following through. But there is unfortunately good reason to worry that he may well follow through on these particular threats. The border wall fight is almost certainly a losing one, but this increasingly desperate president sees it as a lifeline.

As the New York Times reported Monday morning, the shutdown was a major setback for the new Democratic majority in the House, despite efforts to keep the Democratic agenda on track. Bills that the House could have passed weeks ago have languished while Pelosi had to dedicate time to repeatedly passing funding bills in a good-faith effort to end the shutdown.

Perhaps most important, the shutdown clearly delayed the launch of a myriad of investigations into Trump and his inner circle that House Democrats have vowed to conduct.

"The shutdown slowed things down somewhat, probably by a couple weeks. There is only so much time and attention people can give in a day," Rep. Jerry Nadler, D-N.Y., the chairman of the House Judiciary Committee, told the newspaper.

Special counsel Robert Mueller, assigned to look into Trump's possible ties with a Russian conspiracy to criminally interfere in the 2016 election, has continued to make headway in his investigation, arresting Trump's longtime friend and adviser Roger Stone on Friday. But his investigation has been notoriously tight-lipped and remains narrow in its focus.

House Democrats, on the other hand, have a real opportunity to blow the doors off Trump's empire of secrets and corruption. For one thing, they are empowered to do much more than look into the Russian conspiracy. They can start broad investigations into everything from Trump's likely campaign finance violations to the way he and his administration officials have used government power to line their pockets to whatever in Trump's tax returns he doesn't want the public to see. On the Russia investigation itself, the House has an opportunity to reveal information about Trump's secret dealings that Mueller might not be ready or able to share.

No doubt Trump is still smarting over all the glowing coverage of Pelosi, which has made clear how much she kicked his ass over the shutdown. That's probably fueling his current set of tantrums and his insistence that the wall fight isn't over. But I bet he's also noticed that while he didn't get the wall, he was able to stall the investigations for a few weeks.

Now that such investigations are likely to begin in earnest, Trump has every reason to want to throw  a monkey wrench in the works. Occupying Congress with a go-nowhere debate over the wall, complete with national emergency threats and repeated government shutdowns, is the perfect way to do it. That has the added bonus of whipping up his base's racist impulses, and distracting them from disturbing questions about why their president has such a long history of associations with shady characters.

While Trump discovered during the shutdown that Democrats are now prepared put up a fight, he learned another valuable lesson as well: Republicans won't stand up to him.

It's no secret that Senate Majority Leader Mitch McConnell wasn't happy about the shutdown, but for whatever reason — fear of Trump's base, fear of Fox News, fear that his wife would lose her job as Trump's Transportation Secretary — McConnell simply wasn't willing to defy the president and end the shutdown. Even as Republican poll numbers took a dive and Trump saw his approval ratings hit new lows, McConnell continued to serve as a yes man, refusing to take action to stop the shutdown.

In fact, it got so bad that the Washington Post reported that other Republican senators yelled at McConnell during a private meeting and the latter — usually seen as a strong, if amoral, Capitol Hill power broker — petulantly whined, "Are you suggesting I’m enjoying this? It's unlikely that McConnell will get a spine transplant in the next three weeks.

Trump can't actually stop investigations into his various shady dealings with the Democrats in charge of the House, so he's simply trying to find ways to slow things down. His best hope of evading accountability may be to tread water for the next 22 months, running out the clock to the 2020 presidential election.

He's already burned up one of those months with his latest shutdown. Now he'll want to find more ways to waste time until, before we know it, the time to expose his possibly criminal shenanigans has run out.

So even if Trump accepts that there's no border wall and will never be one, he has every reason to keep creating pointless fights over it that result in government shutdowns and other circus-type distractions. That's why this fight is likely not over, and why Democrats need to push ahead with these important investigations in the coming weeks and months.