Yet another zillionaire with a swollen head and zero experience wants to be president. Absolutely, positively not 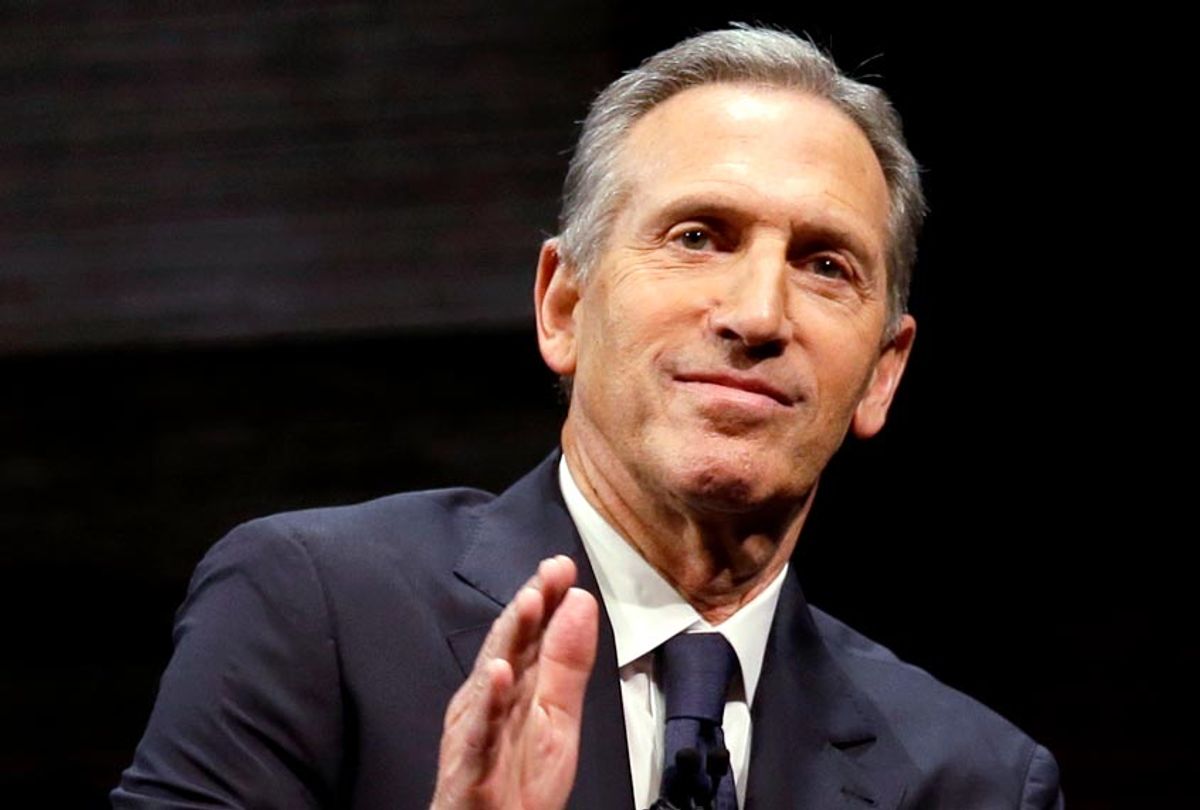 Over the past few months there's been a lot of chatter about former New York mayor and multibillionaire Michael Bloomberg throwing his hat into the ring for president. If he does run, he reportedly plans to do so in the Democratic Party, as an alternative to all the crazy progressives. Good luck with that.

On Sunday, we got confirmation that yet another multibillionaire is seriously considering a run: Howard Schultz, the former CEO of Starbucks.

What in the world are these people thinking? After two years of Donald Trump, do either of these men really think the nation is yearning for another wealthy businessman in the White House? I realize that this idea of "running the country like a business" has been a popular trope for many years, but one might have thought the current disastrous experiment would have provided considerable evidence of what a fatuous idea that is. From Trump to Jared Kushner to Rex Tillerson to Wilbur Ross to Steve Mnuchin and beyond, the private sector folks in government haven't exactly covered themselves with glory.

Sure, people may wish to claim that those particular titans of industry are substandard examples. But seriously, why should we assume that? Many of them came from large and successful companies where they were highly respected. Tillerson ran ExxonMobil, which makes Starbucks look like a corner grocery store by comparison. Ross was a hugely successful investor, known for buying and restructuring failed companies in major industries and selling them for a profit.

Yet both of these high-powered business geniuses have been completely flummoxed by their impetuous and incompetent boss and evidently had no clue how to deal with the media, the political opposition or even the Republican Party which currently mainlines chaos for its political lifeblood.

The Washington Post's Helaine Olen wrote about Schultz a few months ago when his name first bubbled up as a possible candidate. As she points out, CEOs have no experience with the give and take of democracy:

The appeal is that this one person has top-down control. In their just-published book, “CEO Society: The Corporate Takeover of Everyday Life,” Peter Bloom and Carl Rhodes point out that the idea of a CEO politician is ultimately about private rule, not public responsiveness. CEOs take advice but generally don’t need to actually listen to it. They do not govern by consensus. And satisfying shareholders (the vast majority of whom represent business interests or affluent individuals) or other company investors on a quarterly basis is a far cry from running a government. The common good is a discretionary concept. An unprofitable or unpopular latte line can be unceremoniously jettisoned, and a profitable one can be promoted, no matter how unhealthy.

Frankly, between the three members of the billionaire boys' club -- Trump, Bloomberg and Schultz -- I think Schultz may be the worst. He is plotting his run as a "centrist independent" rather than competing within either of the two parties. His stated rationale is “not only the fact that this president is not qualified to be the president, but the fact that both parties are consistently not doing what’s necessary on behalf of the American people and are engaged, every single day, in revenge politics.”

Yes, he's one of those guys. You know the ones. The kind who think that political disagreements are just a bunch of petty squabbles over nothing and all it will take to fix it is for some macho daddy figure to "knock some heads together" and "get the job done."

Schultz claims that Trump isn't qualified, but if that's the case, then neither is he. At least Bloomberg was the mayor of the largest city in the nation. Schultz has even less experience in politics than Trump did when he ran. After all, Trump had dabbled in presidential politics before, running an aborted campaign on the Reform Party ticket in 2000. Schultz's main foray into politics consisted of having Starbucks baristas write "come together" on cups to encourage bipartisanship.

If there is a model for Howard Schultz's politics it would be former Sen. Joe Lieberman, whom Schultz reportedly pushed hard as a possible running mate for John McCain in 2008. For all you kids reading this at home, Lieberman is a onetime conservative Democrat turned independent, and a moral scold. His final act in politics, pretty much, was to tank the public option in the Affordable Care Act to spite the liberals who wanted it.

This bipartisan "Kumbaya" stuff could not be more out of step with today's politics. or more naive about the nature of the two parties and the people they represent. But like Trump, who declared that "I alone can fix it," Schultz seems convinced that he is capable of singlehandedly turning back the clock to a time when the two parties were far less polarized. Even Trump wasn't fool enough to think he could do that by running as an Independent.

The last month should have proved to everyone the value of specific political skills and experience. For the first time since Donald Trump was elected, we have seen professional political leaders who understand how the system works put the brakes on this runaway administration. It was an ugly situation, with the president essentially holding government workers hostage to get his way -- and then being forced to accept that his zero-sum negotiating style is not how government works.

Led by a seasoned politician, House Speaker Nancy Pelosi, the Democrats used their institutional power to demonstrate to the president that he is not the CEO of the U.S. government and that he shares power with the Congress. It was a hard lesson for him to learn, and he may need further schooling yet.

Trump is a special case, but the problem is much larger than just him. It's also the Republican Party, which has consistently grown more and more extreme over the past couple of decades. The idea that a neophyte like Schultz could convene a Latte Summit and make everyone "come together" is laughable.

Of course, he's extremely unlikely to win, or even to get very far. Third-party candidates never do. But they can act as spoilers, and the professional consensus is that if Schultz puts his massive fortune to work on this quixotic misadventure, he could end up sabotaging the Democrats' chance of unseating Trump:

This is from Democratic political operative Howard Wolfson:

And this comes from political analyst Larry Sabato:

I think America has had enough of the "outsider businessman," whether it's Howard Schultz or Donald Trump. It's going to take a massive effort just to get government back up and running properly, much less moving forward again. Schultz needs to leave politics to people who know what they're doing. America can't afford another four years of the Donald Trump amateur hour.