Wall Street execs pick faves for 2020: "It can't be Warren and it can't be Sanders"

Report: If Wall Streeters can't have Bloomberg, they're good with Booker, Gillibrand, Harris, Beto or Biden 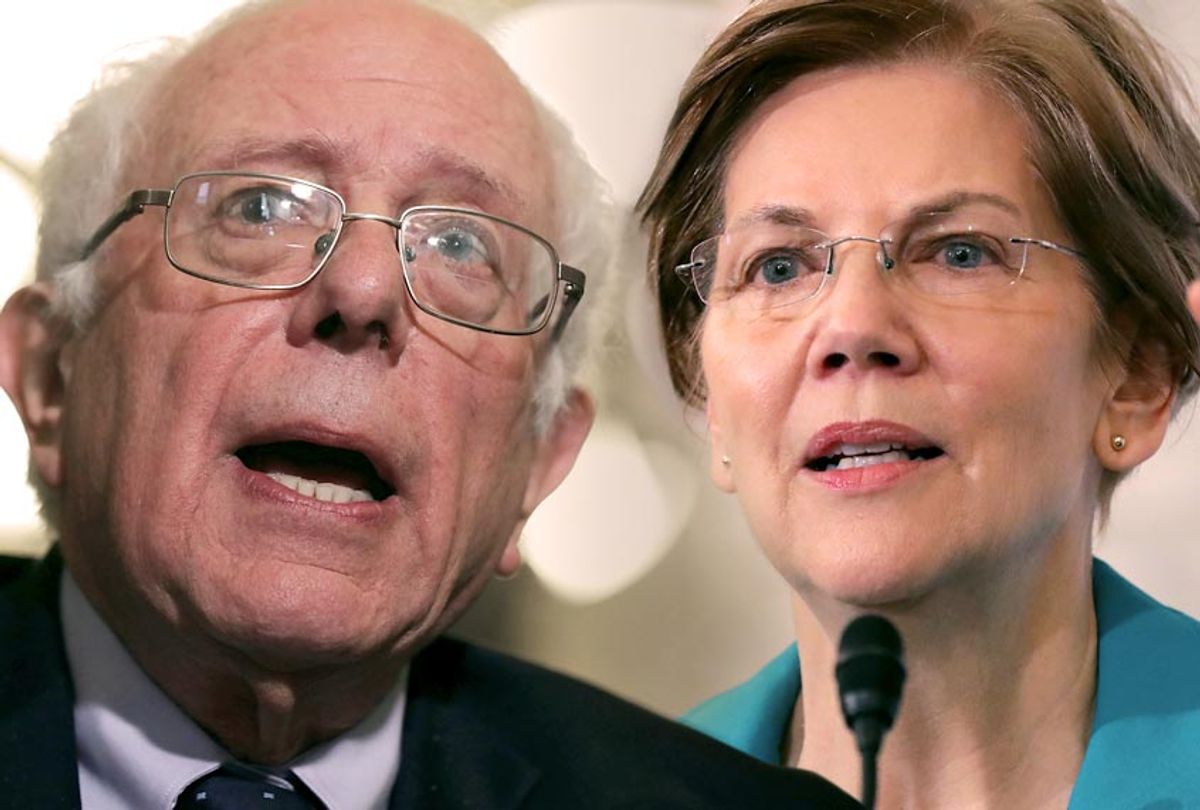 The first 2020 Democratic presidential primary is still over a year away, but Wall Street executives are reportedly already freaking out about two likely progressive candidates: Sens. Elizabeth Warren ,D-Mass., and Bernie Sanders, I-Vt.

"It can't be Warren and it can't be Sanders," the CEO of a "giant bank" anonymously told Politico, which reported on Monday that Wall Street executives are "getting panicked" about the presidential prospects of the Senate's two fiercest financial sector critics.

Warren launched an exploratory committee for president last month, vowing to take on the "corruption" that is "poisoning our democracy." Sanders, for his part, has yet to publicly announce a bid for the White House — but Yahoo News reported on Friday that the Vermont senator plans to launch his campaign "imminently."

Both progressive senators have placed scrutiny of Wall Street's size, record of large-scale fraud, exorbitant CEO pay packages, enormous political influence and lack of stringent regulations at the center of their political agendas for years. Deep-pocketed bankers who have profited immensely from President Trump's tenure are worried that one of the two could ascend to the White House and threaten their pocketbooks.

"Bankers' biggest fear," Politico reported, is that the 2020 Democratic presidential "nomination goes to an anti-Wall Street crusader" like Warren or Sanders.

"The result is a kind of nervous paralysis of executives pining for a centrist nominee like Michael Bloomberg," Politico noted, referring to the billionaire former New York mayor, who is reportedly considering a self-funded presidential bid.

According to Politico, Wall Street executives who want Trump out of the White House mentioned "a consistent roster of appealing nominees" they would find acceptable outside of Bloomberg, who the outlet describes as Wall Street's "platonic ideal."

One executive — whom Politico described as a hedge fund manager and a top Democratic donor — declared, "If it's Biden and Beto or Biden and Harris, that might make a difference. The good news for Biden is everyone likes him. The bad news is there is not a lot of passion."

Progressives were quick to argue on Twitter that Wall Street's fear of a possible Sanders or Warren presidency constitutes a powerful endorsement of both candidates.

By coming out so strongly against the progressive senators, argued The Daily Beast's Gideon Resnick, Wall Street is "literally giving them a campaign slogan."

In response to Wall Street's largely anonymous attacks on Sanders and Warren, People for Bernie tweeted, "We bathe in your tears."

"The best indication of who you should vote for in the Democratic Primary if you actually want progressive policy is who Wall Street doesn't like, which essentially means Bernie or Warren," concluded journalist Josh Mound.