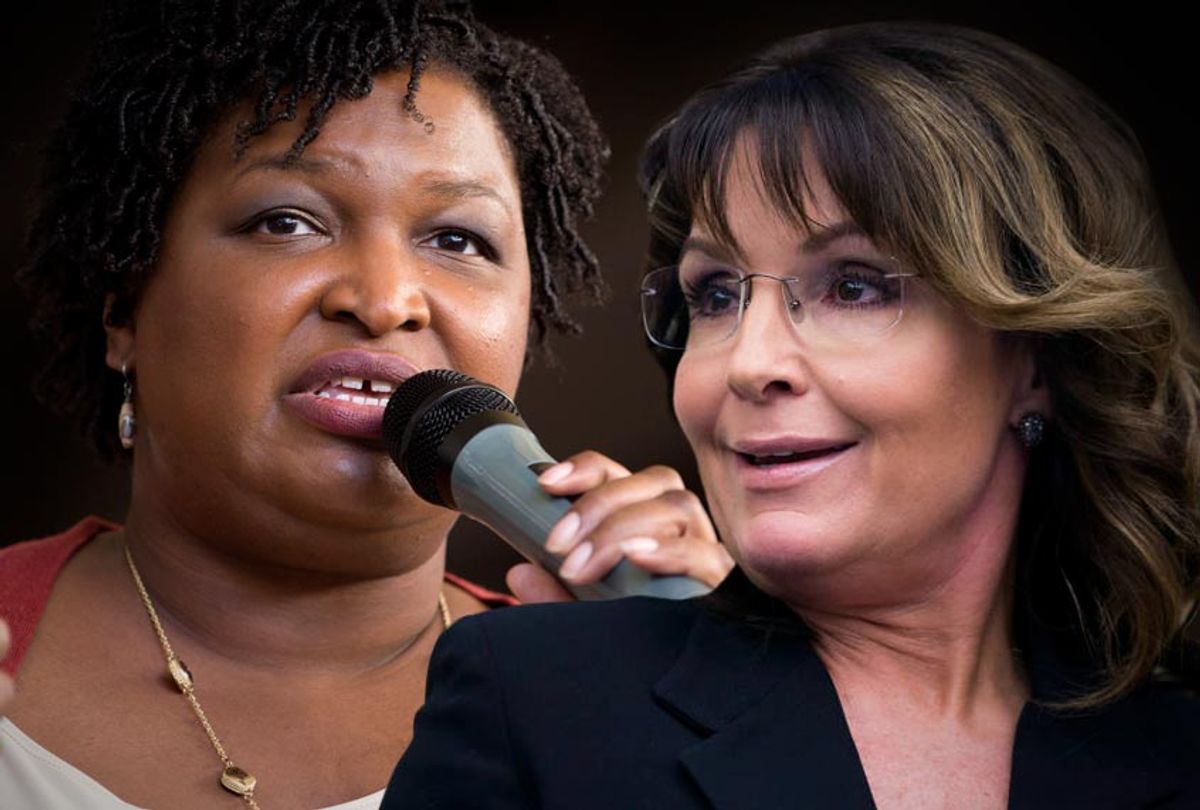 Sarah Palin — the former Alaska governor and Republican vice presidential candidate — mockingly referred to unsuccessful Georgia gubernatorial candidate Stacey Abrams as a "literal loser" in response to a report that she had been under consideration to respond to President Donald Trump's State of the Union address.

In other words, Palin displayed a shocking lack of self-awareness (or, perhaps in her case, not so shocking).

Not surprisingly, Twitter users jumped all over her faux pas.

"I must have missed when you were sworn in as Vice President, literal loser," tweeted Democratic political consultant and journalist John Aravosis.

Martina Navratilova, the legendary tennis player, sagely observed that "Hey Sarah- losers are the people who never try at all or the ones that quit when things don’t go their way. Stacey Abrams keeps fighting and she keeps on going- that makes her a winner. She didn’t quit, like you did… do you understand the difference?"

Fred Wellman, the CEO and founder of ScoutComms, pointed out that "You lost the VP race. You quit your job as governor so you could do a TV show. That got canceled. Now you’re just an idiot tweeting and trying to stay relevant. I’d say you live in a glass house but you’re too stupid to know what that means. Loser indeed."

Entrepreneur and activist William LeGate succinctly summed up the prevailing sentiment on Twitter when he wrote, "Vice President Palin, you make a great point! Losers need to shut up!"

Olin's observation deserves further unpacking, since he raises a valid point. While no legitimate questions have been raised about the outcome of the 2008 presidential election — in which Palin joined Sen. John McCain on the Republican ticket that lost to future President Barack Obama and future Vice President Joe Biden — Abrams loss to Republican candidate Brian Kemp in the Georgia governor's race was very suspicious.

"When you are removing — and my count from my experts is that we know that 340,134 people were absolutely, positively wrongly removed for moving who never moved at all — that's not the entire sum of people wrongly purged," journalist Greg Palast told Salon in October about the impact of Kemp's voter purges on the outcome of the election. "They don't all vote, okay? They don't all vote. Figure a third. Low-frequency voters. Even if 100,000 voted, we're looking at what, maybe, 50,000 provisional ballots? We don't know. Kemp won't even tell us."

He added, "If you do look at the numbers, it's impossible to imagine that Abrams wouldn't have won outright if everyone who is entitled to vote could vote. If all the provisional ballots are counted, if all the absentee ballots are counted, I don't have any doubt about what the outcome would be or would have been."

What's more, there are many who have noted that Palin proved to be more of a drag on McCain's ticket in 2008 than a help. While it is unlikely that any Republican candidate could have won in a year when George W. Bush was an unpopular incumbent and the economy was cratering, Palin's perceived inexperience, fatuity and extremism didn't help McCain's cause.

"Who knows whether we would have won? I think we would have done better than the McCain-Palin ticket did," former Sen. Joe Lieberman of Connecticut, who McCain nearly chose as his running mate until switching to Palin at the last moment, told Salon in September.