“Wouldn’t it be great if the media agreed to stop covering this?” Greg Gutfeld, a co-host of Fox’s “The Five,” says 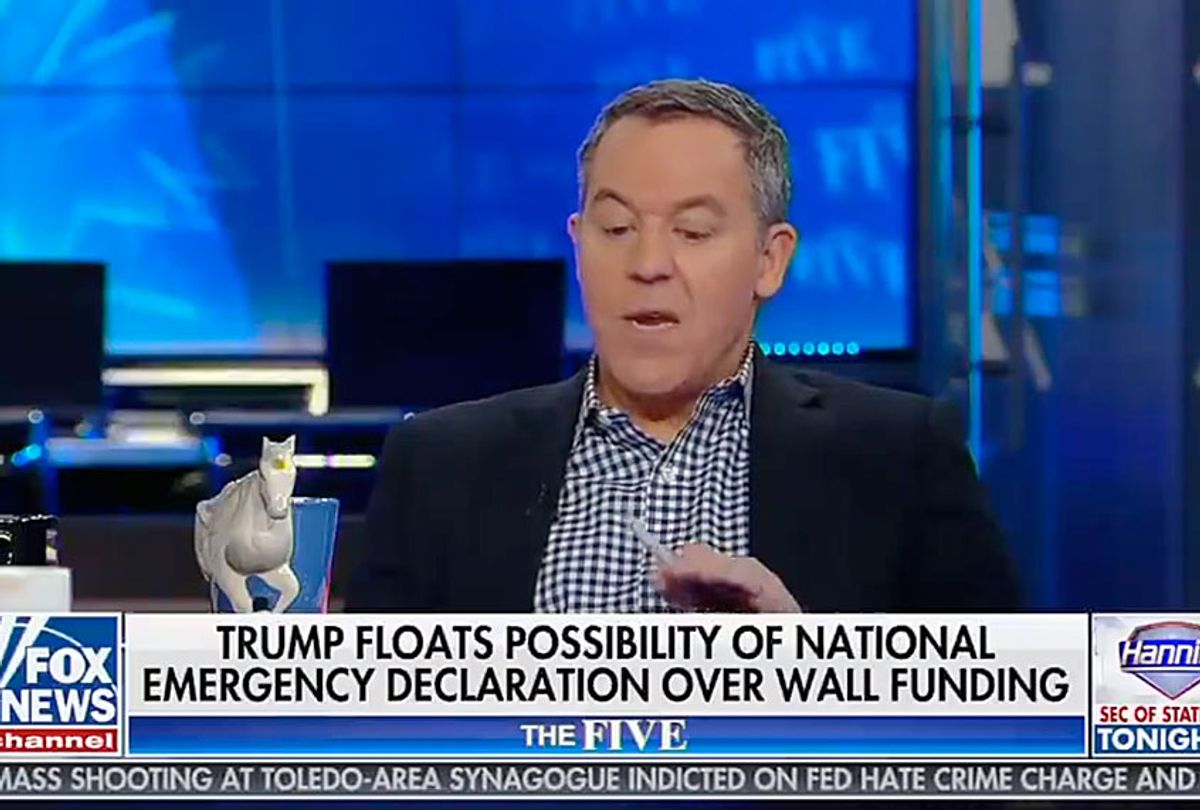 On Tuesday, Greg Gutfeld, co-host of Fox News’ “The Five,” made an incredible suggestion during a segment on the ongoing standoff between President Donald Trump and Congress on funding a border wall.

“Wouldn’t it be great if the media agreed to stop covering this?” said Gutfeld. “Let’s just say, for two weeks, okay? We call CNN and MSNBC and we say, ‘Look, we’re gonna stop covering this whole thing, because we realize that this polarization is generated by us.’ The media is convincing both sides. So the Democrats don’t want to make a deal because they’re following the media’s idea that if you compromise, you cave. Because we saw that when Trump compromised, he caved, he said he’d reopen the government, after calling him an autocrat, then when he compromises, they call him weak and they mock him. So you realize that most of this, if not all of this, is dictated by the media. Wherever the media goes, it just poisons all discussion.”

Leaving aside the fact that, yes, Trump did completely cave on all his demands, Gutfeld’s suggestion is remarkable considering that Fox News has done more than any other outlet to inflame national tempers and fears about immigration.

Of the big three cable networks, Fox devoted way more airtime to immigration (and less time to other big national stories like the Russia investigation, congressional fights over health care, or Trump’s cabinet scandals). Fox led the charge on coverage of the migrant caravan, repeatedly framing it in terms like “storming the border” to panic their viewers. Commentators on Fox have told blatant falsehoods about migrants, including suggesting that they might be carrying smallpox (which went extinct in 1980). In fact, Fox is likely even influencing Trump’s own behavior in the shutdown fight, as he frequently live tweets what he sees on the network.

Why does Gutfeld suddenly think “the media” should stop covering a story that for the past several months has practically been his own network’s entire business model? One reason could be that Trump is losing the fight.

The president frequently uses immigration scare rhetoric whenever he needs to energize or excite his nativist base, which is why he could not stop talking about the migrant caravan in the weeks before the midterm elections. But when his immigration policy becomes so aggressive that the public recoils, this can backfire. It did last summer, when the details of his administration’s brutal family separation policy and child migrant camps in the desert became known. And it did this month, when he shut down the governmentto try to force Democrats in Congress to give him a border wall. Trump’s poll numbers have crashed, and voters now say they trust Democrats over Trump on matters of border security.

The script has reversed on immigration. And suddenly the biggest dog-whistlers are in full-on retreat.