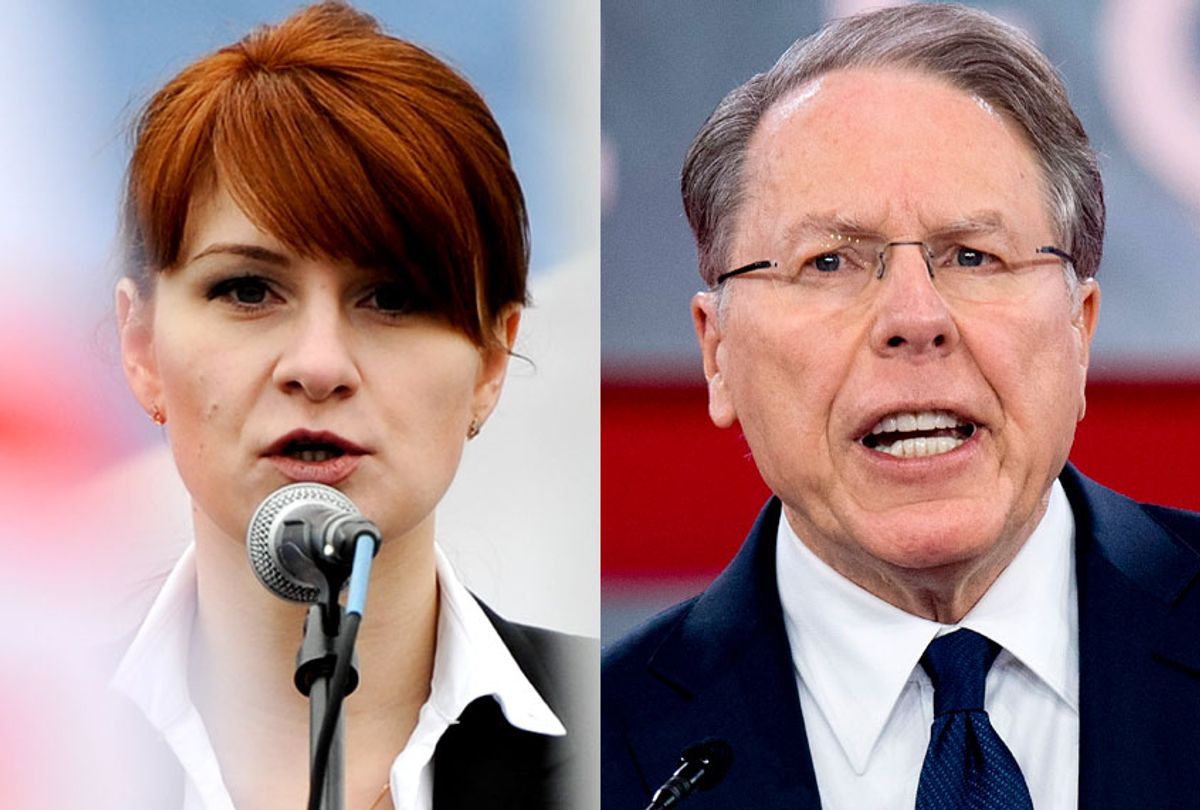 Leaked emails obtained by several news outlets contradict the NRA’s denials that it had nothing to do with its members traveling to Moscow to meet top Russian officials on a 2015 trip organized by admitted Russian agent Maria Butina.

Butina, who recently pleaded guilty to federal conspiracy charges after she was accused of working as a Russian agent to infiltrate conservative circles, organized a 2015 trip to Moscow for top NRA officials. While there, they met with Russia's then-foreign minister, Sergey Lavrov, and other prominent figures as part of an apparent Russian campaign to gain influence with American conservatives.

Several NRA officials told the New York Times on Monday that NRA chief executive Wayne LaPierre "was opposed to the trip" and ordered members not to go. "Given Mr. LaPierre's power within the organization, it is unclear how such a trip would have proceeded at all despite his opposition to it," the Times noted.

ABC News reported that internal NRA documents and emails, as well as photos on social media, appear to show that the NRA "was significantly involved in planning” the trip.

Among those who went on the trip was former NRA president David Keene.

An email obtained by the Daily Beast written by Paul Erickson, Butina’s boyfriend and longtime Republican operative, said that Russian Central Bank official and Butina’s handler Alexandr Torshin offered Keene, who was also a columnist for the Washington Times, an interview with Russian President Vladimir Putin.

“[I]mpressing the NRA’s Russian hosts is also the quickest way to secure a private interview with President Putin on behalf of David Keene and the Washington Times -- a plum that was dangled in front of Keene by Torshin himself during a recent Torshin visit to Washington, DC,” Erickson, wrote according to the Daily Beast. “High stakes all around.”

Erickson’s email also said that the trip could ease tensions between the U.S. and Russia and pave the way for relations with a future Republican president.

“As we discussed over lunch in Iowa, Russia believes that high level contacts with the NRA might be the BEST means of neutral introduction to either the next American President OR to a meaningful re-set in relations with the Congress under a (God forbid) President Clinton,” he wrote. “This simple good will trip would have enormous diplomatic consequences for a future U.S. / Russia bilateral relationship to the world.”

The emails show that Keene played a large part in organizing the trip with Butina, and was angry when another NRA official dropped out of the trip, putting Keene’s plans in jeopardy. Despite LaPierre’s claims, the NRA paid for Keene’s travel expenses, at least, and also bought official NRA “gifts” for the Russian delegation, according to the Times.

Among the members who accompanied Keene were Joseph Gregory, co-chair of the NRA’s Golden Ring of Freedom, a group for donors of $1 million or more; and Pete Brownell, the group’s vice president, who later became its president. Brownell also paid for former Milwaukee Sheriff David Clarke, an NRA member, to go on the trip. Brownell later abruptly resigned from the NRA.

Sen. Ron Wyden, D-Ore., who is leading at least four investigations into the NRA’s ties to Russia, told ABC News that “it's not credible for the NRA to claim that they played no official role in the 2015 Moscow trip.”

“Americans would rightly be outraged if they learned that officers of a powerful, taxpayer-subsidized organization were offered personal incentives by the Kremlin in exchange for access to elite Republican circles,” Wyden later told The Daily Beast. “That question is right at the heart of my inquiry.”

After the meeting, Butina wrote to Torshin about the successful trip she organized.

“We should let them express their gratitude now, we will put pressure on them quietly later,” she wrote.

Around the same time, Erickson wrote, in an email obtained by the FBI, that he was “involved in securing a VERY private line of communication between the Kremlin and key [unnamed political party] leaders through, of all conduits, the [unnamed gun-rights organization].”

When FBI agents raided Erickson's South Dakota home, they found a note in which Erickson mused, “How to respond to FSB offer of employment?” The FSB is the Russian state intelligence agency, successor to the infamous Soviet-era KGB.

During this same period, the NRA, relying on an arm of the organization that is not required to disclose its donors, spent a record $30 million helping to elect President Trump, which was nearly three times the $12.5 million it spent to help Mitt Romney’s 2012 campaign. The NRA and the Trump campaign went as far as coordinating their ad buys for maximum impact, The Trace reported.

All this has caught the eye of special counsel Robert Mueller, whose team has been “raising questions about the relationship between the campaign and the gun group,” according to CNN.

Despite mounting suspicions and eyebrow-raising emails, William Hurd, a lawyer for Erickson, dismissed the reports even as his client faces his own possible charges.

Hurd told the New York Times, “Anyone who thinks that a freedom-loving group like the NRA is going to get all cozy with Vladimir Putin is living in Fantasyland.”