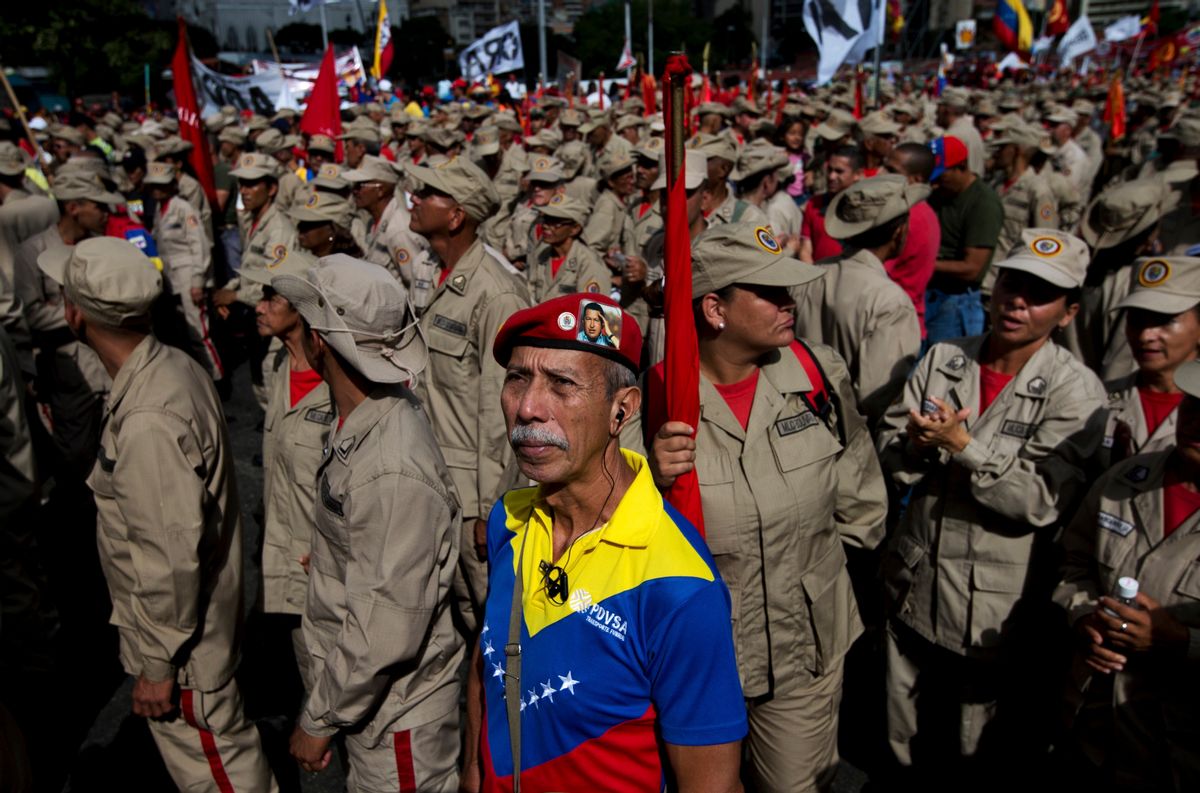 A supporter of Venezuela's President Nicolas Maduro, wearing a red beret is flanked by member of the militia during a rally in Caracas, Venezuela, Saturday, Dec. 17, 2016. (AP Photo/Fernando Llano) (AP)
--

As President Trump pulls U.S. troops out of Syria and Afghanistan, his secretary of state Mike Pompeo and national security adviser John Bolton are taking their frustrated interventionist impulses south to Venezuela.

Why Venezuela, a country of 32 million people on the north coast of South America? The country poses no threat to the United States. Venezuelan immigrants throng Miami, but they are not found on the Mexican border where the president says there is a crisis. Outside of Florida and Washington, D.C., few Americans have any discernible interest in the country.

Oil is a huge factor. Venezuela is one of the world’s largest oil producers, though now most of its oil revenues go to pay off Russia. Now the Trump administration seeks to channel the oil revenues to its preferred president, Juan Guaido.

Trump doesn’t want to fight land wars in the Middle East, but he does need to look and feel tough. An attack on the socialist legacy of Hugo Chavez and the failed rule of Chavez’s successor Nicolas Maduro offers a way to project his manliest self without the intolerable demands of being a wartime president.

Trump has been filibustering about Venezuela since August 2017, when he said of the U.S. military:

“They have many options for Venezuela — and, by the way, I’m not going to rule out a military option. We’re all over the world, and we have troops all over the world in places that are very, very far away. Venezuela is not very far away, and the people are suffering, and they’re dying. We have many options for Venezuela, including a possible military option, if necessary.”

And “filibuster” is the apt term. Long before “filibuster” signified lengthy speech in the U.S. Senate, a filibuster (filibusteroin Spanish) referred to an American adventurer who sought to foment insurrection in Central and South America in the 19th century.

John Bolton was filibustering when he leaked his intentions toward Venezuela on an artfully displayed notepad: “5,000 troops to Colombia.”

In Bogota, former Colombia President Alvaro Uribe tweeted back, “No, gracias,” but was otherwise supportive.

What a change from 15 years ago. In 2002, president Hugo Chavez, the self-proclaimed Bolivarian revolutionary, confronted a military coup supported by the United States. Governments across Latin American rallied in defense of Chavez’s government, and the coup fizzled.

Now Latin America has more conservative governments that feel threatened by the exodus of some 3 million Venezuelans into neighboring countries.

What remains the same is what Latin American scholar Abe Lowenthal calls the “hegemonic presumption” of the U.S. government. The presumption is that Latin America is the United States’ “backyard.” In this mental construct, Venezuela is seen as a private domain where Washington can do what it pleases, with or without the support of other countries.

The cast of characters hasn’t changed.

Trump’s special envoy to Venezuela, Elliott Abrams, was pursuing regime change in Latin America, via illegal means 30 years ago. Convicted of withholding information from Congress in the Iran-Contra conspiracy, Abrams was pardoned by the late President Bush.

John Bolton is on record as favoring regime change in Libya,Syria, North Korea and Iran. Alas, Libya’s Qaddafi is dead. Bolton’s boss is pulling U.S. troops out of Syria (which Iran welcomes). Trump is talking peace with North Korea. Without Venezuela, what would the mustachioed warmonger do with his time?

“While there’s no proof the CIA is involved there, I’m sure they are,” said Peter Kornbluh, analyst at the National Security Archive, in an interview. “The U.S. has long wanted to see Chavez and Chavismo overthrown.”

While we don’t have verifiable information about the CIA’s activities in Venezuela today, U.S. regime change operations in Latin America have seven consistent features, some of which are visible in Venezuela today.

The CIA stations in the regions have long had strong relations with local partners.

“CIA-trained Cubans controlled DISIP, the Venezuelan intelligence service, in the 1970s,” Kornbluh said in an interview. One of those Cubans, Luis Posada (known by the CIA cryptonym AMCLEVE-15), played a central role in planting a bomb on a Cuban airliner in 1976, killing 73 people. He took refuge in Venezuela and became a senior official in DISIP.

“You can be sure they’re using their people in the military and intelligence agencies,” said Mel Goodman, a retired CIA briefer whose work took him to CIA stations in the 1970s and ’80s. “It’s basic tradecraft.”

When Elliott Abrams started helping mount covert regime change policies in the 1980s, his formal job title was assistant secretary of state for human rights. He broke the law in service of human liberty, he explained.

Otto Reich, another Reaganite regime changer in the 1980s, used the State Department’s Office of Public Diplomacy as the cover for covert operations. According to a House Foreign Affairs Committee report, senior CIA officials used Reich’s office to mount a “domestic political and propaganda operation” in support of Nicaragua policy.

Reich never lost his taste for intervention. Two decades later, in the second Bush administration, he became assistant secretary of state for the Western Hemisphere and supported the failed coup against Chavez.

More recently, the National Endowment for Democracy (NED), a U.S.-funded agency, has funneled millions to the opposition groups in which Guaido rose to political prominence.

Venezuela says NED is a front for covert operations; the U.S. government denies it.

In 1985, I wrote a story that appeared in the New Republic about how CIA officers created, guided and controlled the Nicaragua Democratic Force (FDN), which sought the overthrow of the country’s leftist government.

A CIA officer named Tony Feldman explained to Edgar Chamorro, director of the FDN, that he shouldn’t tell reporters the group was trying to overthrow the government. “He emphasized we should say we were trying to ‘create conditions for democracy.’”

What if someone asked where the FDN got their money?

Echoes of such evasions can be heard in the denials of some Venezuelan opposition groups today.

4. Use the State Department to support existing parties that align themselves with regime change

The WikiLeaks cables illuminate multiple examples of this tactic.

In the 2015 book"The WikiLeaks Files: The World According to US Empire," the radical transparency group highlighted numerous State Department cables documenting how the United States sought to undermine elected governments whose policies were opposed by local economic elites and U.S. policymakers.

After leftist Evo Morales was elected president of Bolivia in 2005, the U.S. ambassador immediately threatened to cut off U.S. and international aid. When Morales decided to spurn the assistance, the State Department began focusing instead on strengthening the opposition, which was based in the eastern region of the country known as Media Luna. A cable from April 2007 discusses “USAID’s larger effort to strengthen regional governments as a counter-balance to the central government.”

A USAID report from 2007 stated that its Office of Transition Initiatives (OTI) “approved 101 grants for $4,066,131 to help departmental governments operate more strategically.” Funds also went to local indigenous groups who were “opposed to Evo Morales’ vision for indigenous communities.”

When the region rebelled against Morales’ government in 2007, many Latin American governments feared a U.S.-backed coup was in the offing and came to Morales’ defense. His government survived.

Nicaragua got the same treatment. In March 2007, the U.S. ambassador asked the State Department to provide an additional $65 million over the next four years “through the next Presidential elections” when the leftist Daniel Ortega would be running for reelection.

The U.S. funds went for “the strengthening of political parties,” “democratic” NGOs, and “groups engaging in critical efforts that defend Nicaragua’s democracy, advance our interests, and counter those who rail against us.”

“Cables like this one should be required reading for students of US diplomacy and those interested in understanding how the US ‘democracy promotion’ system really works. Through USAID, the National Endowment for Democracy (NED), NDI, IRI and other para-governmental entities, the US government provides extensive assistance to political movements that support US economic and political objectives.”

This is not a CIA function, but it is a consistent feature of U.S. regime change policies in Latin America. Intervention in the internal affairs of other countries requires sophisticated intellectuals and policy arguments that can outwit or overwhelm those who object to an outside power “meddling in our elections.”

Enter the Atlantic Council and Center for Strategic and International Studies, which have taken the lead in advocating the replacement of Venezuela’s current government.

CIA operations in Latin America have a way of working their way back to Cuba. Ever since the agency’s invasion force was routed at the Bay of Pigs, the CIA has sought revenge. The agency plotted multiple times to kill President Fidel Castro. They protected the terrorists who bombed the Cuban airliner in 1976. The agency’s problem is that it has been consistently thwarted.

In the late 1980s, Cuban intelligence rolled up a CIA operation headed by a Cuban-American officer named Amado Gayol. The government turned this successful counterintelligence operation into a five-part TV series that made the agency look silly in the eyes of the Cuban people. Fortunately for Langley, Americans never learned of that particular regime change debacle.

Along the way, Cuba supported leftist movements throughout America’s supposed “backyard.” While revolutionary Cuba failed to build economic prosperity and drove many of its people into exile, the one thing the government in Havana did very well was defying U.S. regime change policies.

What to expect in Venezuela

“Unlike in Syria and Afghanistan, they have very clear guidance from the president. [CIA Director] Gina Haspel knows what’s expected. Her whole career is operations. You can be sure, they’re down there collecting. They’re calling their people. They’re putting on the pressure to follow the White House line.”

“It’s a dangerous and fraught situation,” Kornbluh said in an interview. “From a humanitarian point of view. From a military point of view. And from the point of view of an imperial United States returning to the region.”