Alexandria Ocasio-Cortez vs. the "fact-checkers": Challenging the boundaries of conventional wisdom 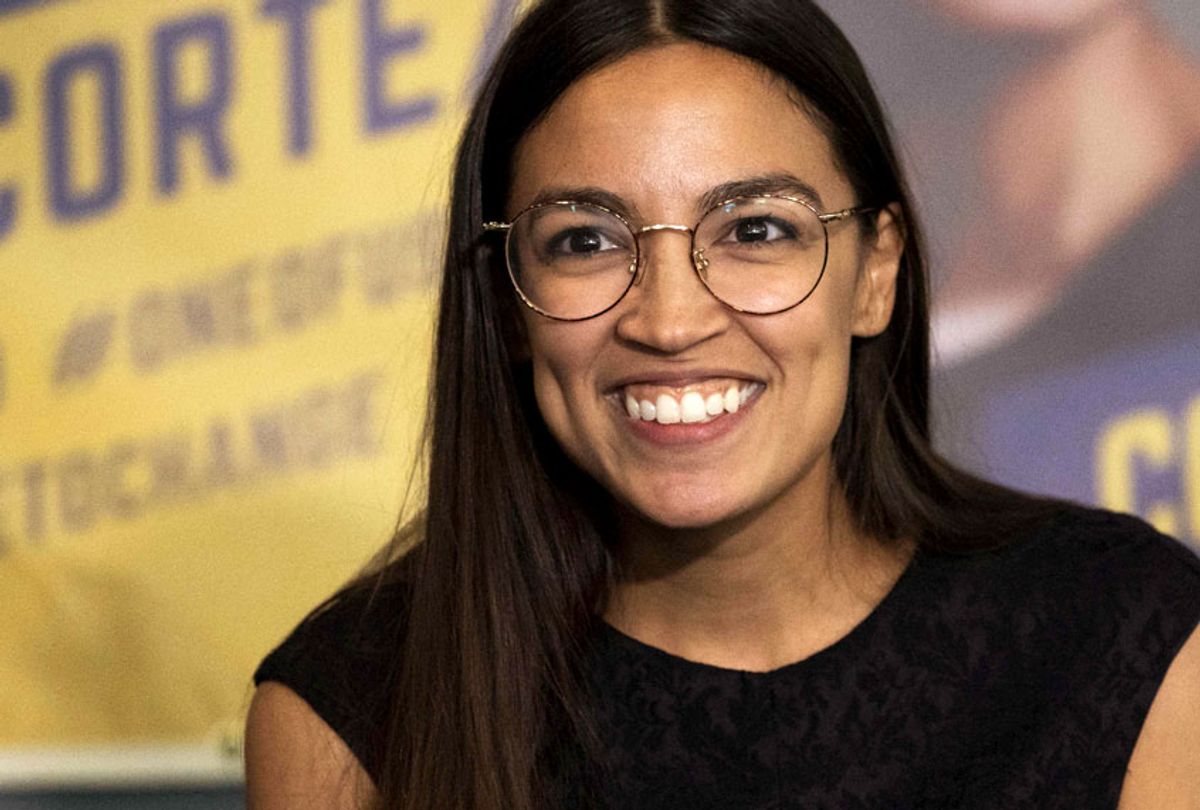 A truth that’s told with bad intent
Beats any lie you can invent
– William Blake, "Auguries of Innocence"

Fact-checking political discourse is noble in theory, but it can easily go wrong. That's what happened in 2011, when PolitiFact’s “Lie of the Year” -- the claim that Republicans wanted to end Medicare -- was actually true, as Paul Krugman, Steve Bennen and others pointed out. Writing for the Columbia Journalism Review, Greg Marx summarized the problem with PolitiFact’s “reasoning”:

The problem with "fact-checking" was much bigger than this one spectacular misfire. As Marx noted, most articles in the genre "actually contain counterarguments — many of which are solid, some shoddy or tendentious, but few of which really fit in a 'fact-check' frame." Such articles are engaged in “patrolling public discourse,” he continued, a project that “will inevitably involve judgments not only about truth, but about what attacks are fair, what arguments are reasonable, what language is appropriate.”

If that was problematic in 2011, welcome to 2019, as fact-checkers have homed in on Rep. Alexandria Ocasio-Cortez, D-N.Y., face of the progressive resistance, while Donald Trump is burning down their house.

It happened again last week, when Washington Post fact-checker Glenn Kessler gave AOC “three Pinocchios” for comments she made about economic justice, echoing Dr. Martin Luther King, at an event honoring his birthday. Kessler ignored the context of her argument and picked out four claims, three of which he deemed false. But Kessler actually confirmed one of those without realizing it, while another was purely semantic and the third was at worst debatable, not a clearcut falsehood. If anything, Matt Bruenig’s detailed attack on Kessler’s analysis for Jacobin made it seem more substantial than it actually was.

In part, fact-checkers are always seeking a false balance — as PolitiFact was doing in 2011, after twice awarding its “Lie of the Year” to Republican falsehoods about Obamacare — in 2009 for “death panels,” and in 2010 for calling it a “government takeover.” Now the Post Fact Checker’s database has tallied 8,158 false or misleading claims made by Trump in his first two years as president, so its team feels obliged to ding Democrats as well.

But there’s something more complex happening here too, that’s probably best understood in terms of press scholar Daniel Hallin’s three-sphere model of how the media functions, from his 1986 book The Uncensored War. At the center is the sphere of consensus, mom-and-apple-pie country. Surrounding that, like a donut, is the sphere of legitimate debate, where journalists’ attention is usually focused, where there are two sides to every story and a need for objectivity and balance to be maintained.

Beyond that, though, is the sphere of deviance, the outer darkness in which dwell “political actors and views which journalists and the political mainstream of society reject as unworthy of being heard.” The shoddy fact-checking directed at Ocasio-Cortez reflects a boundary-policing instinct, and an outdated one, considering that the entire political landscape has been irrevocably changed.

To understand how shoddy it is — and the unspoken agenda involved — we need to take a closer look at the totality of what went down. Kessler was quoting from a snippet of AOC’s response to a question by Ta-Nehisi Coates in an MLK Day interview. The context is important, because context is everything in political discourse: What’s radical in one context is mom-and-apple-pie material in another.

King, paradoxically, is both. The question asked and the answer given were both in King's spirit — but not the mom-and-apple-pie version of him the media (and much of America) loves to celebrate. It more reflected the actual, radical Martin Luther King Jr., who spoke out against the “the giant triplets of racism, extreme materialism, and militarism,” and said, “True compassion is more than flinging a coin to a beggar. It comes to see that an edifice which produces beggars needs restructuring.”

This is exactly what Coates asked about in asking, "Do we live in a moral world that allows for billionaires? Is that a moral outcome?" Ocasio-Cortez answered, “No it's not,” with an immediate clarification: “I think it's important to say that I don't think that necessarily means that all billionaires are immoral. It is not to say that someone like Bill Gates, for instance, for example, Warren Buffett are immoral people, I do not believe that.” Contrary to a favorite media trope, she’s not demonizing the wealthy just as Republicans demonize the poor. Then she returned to core King mode:

The section of that passage in italics is what Kessler chose to fact-check, broken into four parts (indicated in brackets). He awarded her “three Pinocchios,” which the fact-check guide explains as "significant factual error and/or obvious contradictions. This gets into the realm of 'mostly false.' But it could include statements which are technically correct (such as based on official government data) but are so taken out of context as to be very misleading."

Here, however, the situation is the opposite: even if some of AOC’s statements were technically incorrect -- if she were wrong in the ways Kessler claimed -- that wouldn’t necessarily invalidate her moral argument. That would require an error or contradiction in her moral reasoning — about which Kessler has nothing to say.

Kessler admitted that claim No. 2 was correct — in fact, it could be 135 hours, he said. But what of the other three claims? Ocasio-Cortez claimed that “a vast majority of the country doesn’t make a living wage,” while Kessler claimed the figure was "only" "about 32 to 38 percent of workers," relying on calculations based on the MIT Living Wage calculator. Even if he’s right, that’s still morally outrageous, and serves to support her larger argument.

She claimed that Walmart and Amazon “experience a wealth transfer from the public,” and Kessler argued that only amounted to “between 20-30 percent of the benefits,” essentially confirming what she had claimed. Ocasio-Cortez said such companies were “paying people less than a minimum wage,” which was likely a simple misstatement. Kessler responded that they paid more than the minimum wage — but not more than a living wage, which was clearly the intended focus of her remarks.

So even if Kessler were right on every factual point, and Bruenig and AOC were wrong, her argument would still stand. If fewer people earn below less than a living wage than she stated, then arguably the situation is less dire than she described -- but it's not radically different. Furthermore, MIT’s “living wage” isn’t the last word on that subject. It’s an admirable measure, but it’s a “surviving wage,” not a “thriving wage.” A true living wage would mean more than simply surviving from paycheck to paycheck. It would mean the ability to build a future for oneself and one's family. Here’s how the MIT Living Wage website puts it:

When coupled with lowered expenses, for childcare and housing in particular, the living wage might also free up resources for savings, investment, and/or for the purchase of capital assets (e.g. provisions for retirement or home purchases) that build wealth and ensure long-term financial security.

In short, without lowered expenses the MIT living wage does not allow people to thrive — as Ocasio-Cortez knows from her own lived experience. So she was well justified in having a higher standard in mind. The flood of hardship stories from the recent government shutdown should make it obvious how precarious most middle-class families are, and how many of them fall between the MIT living wage and what a truly thriving living wage would be.

So, read in context, everything AOC said was true, even if we accept Kessler’s factual counterclaims! The entire fact-checking ritual was a charade. As I suggested earlier, it was really a boundary-policing episode, meant to keep her "radical" ideas outside the sphere of legitimate debate by portraying her as untrustworthy. Further, it was meant to deter others from similar infractions while trying to break through the barriers excluding them from legitimacy. (See AOC's related Twitter thread on "gravitas" here.)

But the problem is that Kessler's implied boundaries are not worth policing, or even recognizing. The whole system is in crisis, and the mainstream media’s assessment of what is deviant, what reflects normative consensus and what represents legitimate debate bears little or no relationship to reality. Take two other examples AOC has been associated with — raising top marginal tax rates to 70 percent and a Green New Deal. The first idea drew immediate majority support — 59 percent in a poll for the Hill, including 56 percent of rural voters and 45 percent of Republicans—and scorn from the 1 percent at Davos.

Dell Technologies CEO Michael Dell laughed at the idea (video here), and said he thought it would be bad for economic growth. “Name a country where that’s worked," he responded. "Ever.” Sitting there with him was MIT economist Erik Brynjolfsson, who supplied the example: the United States, throughout most of its post-World War II expansion. It was a rare, Marshall McLuhan-in-"Annie Hall" moment. Usually, when the super-rich or their sycophants spout off like that, truth does not intrude. Certainly not from the fact-checking media.

But the media’s failure is even more striking when it comes to climate change and the Green New Deal. It’s still a rarity for the media to treat climate science as firmly within the sphere of consensus, where all reputable researchers say it belongs. As far back as 2004, a study found that “US prestige-press coverage of global warming from 1988 to 2002 has contributed to a significant divergence of popular discourse from scientific discourse,” and that “the prestige press's adherence to balance actually leads to biased coverage of both anthropogenic contributions to global warming and resultant action.”

Four years later, just after the financial crisis hit, George Soros told Bill Moyers that something akin to AOC's Green New Deal was needed, to respond both to global warming and the financial collapse:

For the last 25 years ... the motor of the world economy that has been driving it was consumption by the American consumer, who has been spending more than he has been saving, all right? Than he's been producing. So that motor is now switched off. It's finished. ... You need a new motor. And we have a big problem. Global warming. It requires big investment. And that could be the motor of the world economy in the years to come.

For all Soros’ supposed power, you’ve probably never heard that idea. It remained on the fringes, if not beyond the fringe in the sphere of deviancy. But if that prescription had been followed, rather than the austerity economics that took over after 2010, we'd be living in a radically different and more hopeful world today.

Ocasio-Cortez’s ideas — on marginal tax rates, a Green New Deal  and economic justice — are only deviant in a media system that’s utterly divorced from reality. That’s why it would be a serious mistake to view her in isolation. The intellectual incoherence of "fact-checking" poses a serious threat to Democrats and progressives — and to democracy itself — through the 2020 election, at least. The sooner we all wake up to that, and respond to it, the better.