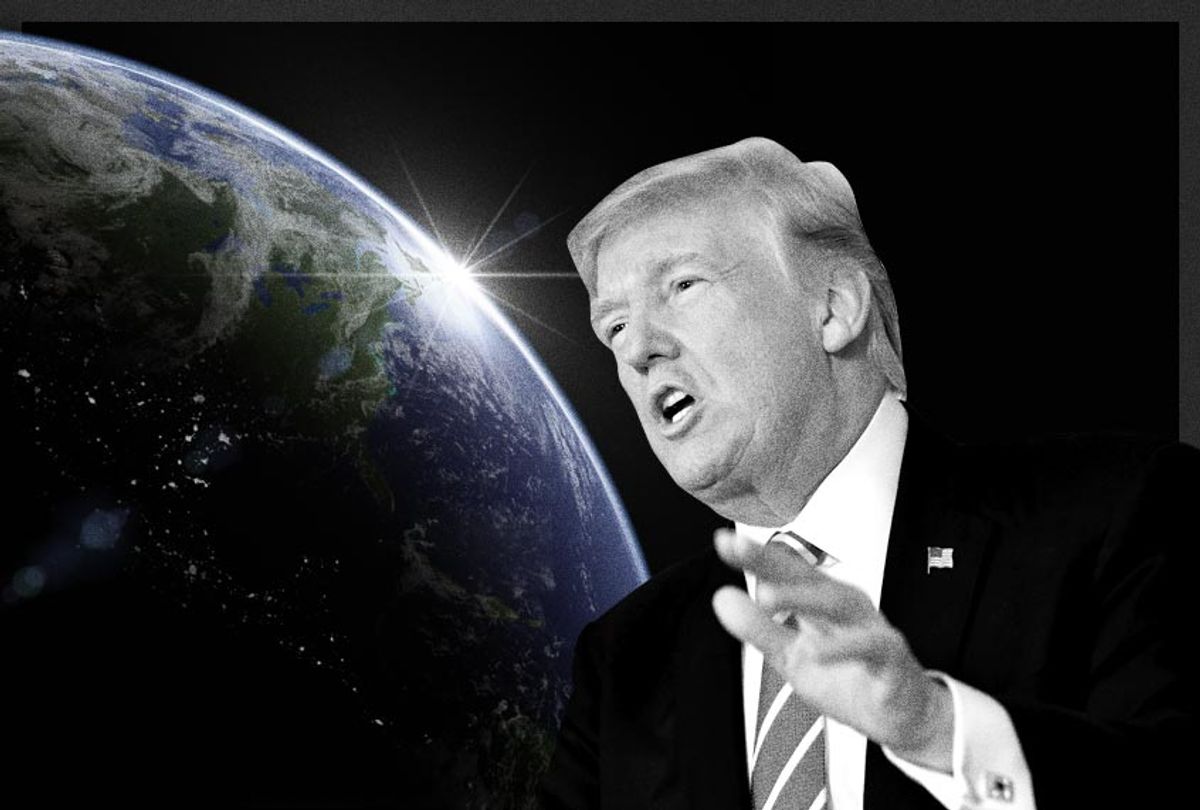 Whether it is his absurd counter`-factual justification for the wall or his made up statistics about immigrants, Donald Trump’s daily lies all evolve from a much larger lie — globalization has been extremely harmful to America.

On the whole the exact opposite is true. America was — and still is — the biggest winner in the current era of globalization.  Of course, a country like China that was in abject poverty became much richer because of globalization, but America became even wealthier. In a globalized world, trade is only a zero-sum game in the negative when major economies become poorer and drag their trading partners down with them.

Take a look at what happen since 1980, when globalization first started to be a major factor. The United States at that time had a gross domestic product of $2.8 trillion dollars, while China’s was only $302 billion. By 2017 the US economy had grown to $ 19.39 trillion, and the Chinese economy grew to $12.24 trillion. The US economy grew massively during that period, even taking into account the crash of 2008.  Of course, China’s rate of growth during the same time was much higher, but that is just basic common sense. If you start with very little, you need to catch up. China needed to build steel mills and highways, and to electrify their rural areas. The United States did all that a long time ago. The point is that the United States did not get poorer as China grew — quite the opposite.

Since China started at practically zero when globalization began, its winnings look much more impressive to the outside world than reality. In the aggregate of course, China has became a much wealthier country, but on a per capita basis it is still very poor compared to the United States. As an example, in 2017 China’s per capita GDP — based on purchasing power parity — was only $16,760 compared to $59,531 per capita for the U.S. Even Greece, the stick-person of Europe with a per capita income of $27,820, is wealthier than China on a per capita basis.

As China was getting richer, American consumers—and especially the middle lower class that, because of a smaller income, tend to spend more on basic goods — benefitted enormously from globalization. As an example, look at a basic item like baby and toddler clothes, on account of imports the price of these items dropped by 10 percent from 1999 to 2013.  Or look at jeans the American garment staple. Levi’s jeans that retail for around $128.00 would be $348 if made in the United States.  While according to the Dallas Fed, Americans saw their choice of products expand by one-third in recent decades on account of globalization. Just look at the variety of fruits and vegetables at one’s local grocery store, even during the heart of winter.

The United States is in fact a child of globalization, born during one of globalizations earlier inclinations, the European age of discovery. Globalization is part of America’s DNA. To try to separate globalization from America would be like separating a child from its mother.

Long before the current term “globalization” became popular, the United States as a country defined the word. Founded by a mixture of cultures — whether British in New England, Dutch in New York, French in New Orleans or Spanish in its west—the United States then opened its doors in the mid-to-late 19th century to massive immigration from all over the world. In the second half of the 20th century, the United States not only created the rules that allowed the current era of globalization to spread around the world, it also became the enforcer of those rules - the COP.

Politics is based on perception as much as reality and for the minority who make up Donald Trump’s base, globalization is the other, taking away jobs that actually left ten years ago. To these people, there is little difference between American jobs going overseas or, because of open borders or simplified visa requirements, immigrants coming into the United States. Either way, they feel, globalization has taken opportunities away from them.

In all honesty many of these people have been harmed by globalization as well as by technology and automation. But to make globalization the scapegoat and promise to bring back yesterday does a disservice to these people by allowing them not to face the reality of adapting to change. Just take a look at the coal miners who Donald Trump continues to support in a world where coal is both dirty and uncompetitive. He keeps on bragging about how his administration has brought a rebirth to the coal industry while in reality more U.S. coal-fired power plants were shut in President Donald Trump's first two years than were retired in the whole of Barack Obama's first term.

For the people who have been left behind, adapting to change is very hard, and it is easier for them to believe the lie than face the reality that the majority of Americans have benefited from globalization. While for Trump it is much easier to lie to these people as a way of solidifying their support than to make the budgetary and tax compromises needed to institute real programs to help them.