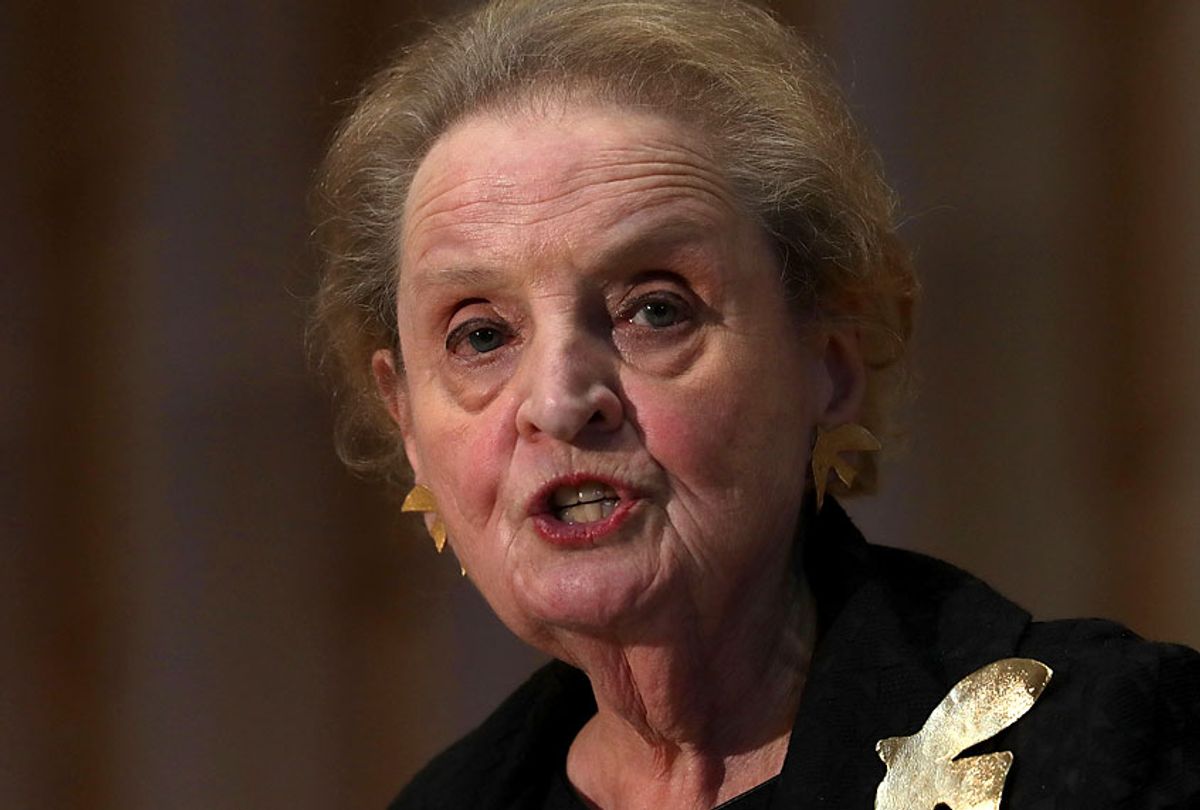 Forme secretary of state Madeleine Albright about President Donald Trump's foreign policy, it quickly became clear that the issue at stake is whether the American hegemony she helped reinforce in the late 20th century will continue to prevail in the 21st.

Most people know Albright as one of the major shapers of President Bill Clinton's foreign policy during his second term. Among feminists, she is an icon — not just the first woman to be secretary of state, but someone who indisputably made her mark known throughout the world. Some critics on the left would argue that the legacy itself isn't an admirable one (a few years ago protesters at a small college denounced her as a "war criminal" and "repeated genocide enabler").

Her new book "Fascism: A Warning" is precisely that. It serves as a comprehensive primer for anyone seeking to understand the major foreign policy issues facing the United States in the late 2010s and makes a compelling case for why America needs to play a role in shaping world affairs even if it has been imperfect in doing so in the past.

The following interview has been lightly edited for clarity.

You say in your book that [Russian President Vladimir] Putin faces more pressure from the nationalist right than from the middle or left, and that he isn’t a fascist but does emulate Stalin when it is convenient for him.  Does this authoritarian brand of nationalism and aggressive actions toward other nations constitute some sort of ideology? I’m thinking specifically of an interview I did with [former United States Ambassador to Russia] Michael McFaul in which he referred to it as the Illiberal International.

Well, I think that what it is doing is undermining democracies for the sake of separating them from the United States and from each other and it is a new form of using… It’s kind of weaponizing information, and what sometimes is called asymmetrical warfare, in terms of making sure that our alliances are weakened and that the democratic institutions in those countries are under pressure and threat. At the same time, I think that it does work also as a way of expanding Russia’s influence. I would agree with Ambassador McFaul in the way that he states it. I think we are not really preparing well enough to deal with it. Not only that, I think some of the statements and things that President Trump says and does in reaction are gifts to Putin, if I might put it that way. It is kind of helping in an agenda, whether it’s done on purpose or mainly because of President Trump’s own views towards alliances and the validity of our relationships with some of our friends.

It’s interesting that you discuss Trump’s rhetoric because another observation that McFaul had is there seems to be a disconnect between a lot of what Trump says about Putin and Russia and what his administration actually implements policy-wise. As recently as today we saw this with Trump tweeting disagreements with [Director of National Intelligence] Dan Coats on Syria, Iran, North Korea and Afghanistan. What are the long-term consequences of this disconnect between what Trump says and what his administration, or at least his advisers, are doing?

Well, I think that it definitely complicates how we carry out policy. I was very surprised by what I saw on TV and what I’ve read so far. The way that the intelligence community sees the threat and the way that Trump is carrying out policy, I mean, it is really a disconnect.

I’ve now decided the simplest way of putting this in answering your question is, Putin is playing a weak hand very well and we are playing a strong hand poorly.

You mention in your book that [Venezuelan President Nicolás] Maduro’s attempts to blame the United States were easy to dismiss until Trump threatened military intervention, describing this as “a bit of diplomatic clumsiness that was a gift Maduro badly needed.” Do you think it lends credibility to [Maduro’s] current claims that the coup attempt against him may have been orchestrated by the United States?

Well, he’s using it in that particular way because obviously what was going on in Venezuela was something that began as a popular movement by [Juan] Guaidó and the man has now declared himself President. But I do think, and this is a little difficult to talk about, because I do think that some of the parts in terms of supporting what has happened are absolutely appropriate. Not only by the United States but also in conjunction with some of the Latin American countries, the so-called Lima Group [Argentina, Brazil, Canada, Chile, Colombia, Costa Rica, Guatemala, Guyana, Honduras, Mexico, Panama, Paraguay, Peru, Saint Lucia], who are supportive of what is going on, as well as Canada. I thought, however, that the introduction of using military force at that particular time is something that did give kind of an alibi or an excuse to Maduro to say that this is just intervention.

What will be the impact of Trump’s military withdrawals from those countries? Do you think the United States negotiating with the Taliban make sense?

Well, first of all, I think it is a tragedy of how long the war in Afghanistan has taken place. There was a reason to get involved in there after 9/11. I won’t take the time to explain what I think are some of the mistakes from turning attention away from what we were doing in Afghanistan, then all of a sudden having a war in Iraq, but I do think that I can understand why people think that the war in Afghanistan has taken a very long time, and there should be a way to end it politically. I think that the talks, however, that are going on are very important, but — and I am worried about this — is that the Taliban have an abominable record towards women, and generally governors, and I hope that what is not happening or will not happen in next steps is that we will agree to the fact of just dealing with the Taliban and not dealing with the elective government in Kabul, [Afghanistan President] Ashraf Ghani. I was also recently reading [former United States Ambassador to Afghanistan Ryan] Crocker’s article or interview in terms of saying that it brings to mind the Vietnam peace talks, and so I do think we have to be careful to just be looking at a piece of something and then not understanding the overall aspects of it. I also do think, and I thought this for some time, that it’s a mistake to signal to adversaries how long we’re going to stay in a country or the number of troops. Because it’s a signal, they know that we won’t be there for whatever length of time and then they create their policies with regard to that.

I’d like now to move a little further west, to Yemen. Why do you think the crisis in Yemen hasn’t drawn more attention, and how has the United States relationship with Saudi Arabia changed since your time as Secretary of State?

Well, I’ll start at the bottom of that. I think that American relationships with Saudi Arabia have always been complicated, from President [Franklin] Roosevelt on. We do see them as a country that’s very important to us strategically and in any number of different ways. When during the [President Jimmy] Carter administration and then particularly during the [President Bill] Clinton administration we spent time talking about some of the human rights issues in Saudi Arabia, and we have had issues with that. I think that it’s very… You’ve asked a hard question in terms of, I don’t know why the Yemen thing has not attracted more attention because it really is a huge tragedy. A proxy war between Iran and Saudi Arabia is being played out on the heads, literally, of the Yemenis.

The part that I find truly horrible is that some American military equipment is actually being used in terms of some of the tragedies of shootings and various things that are going on in Yemen. I think that it’s awful that we’re not paying attention to the humanitarian aspect of it.

My next question is about China: In your book you write that Trump’s “America First” foreign policy and trade policy could force the next president to inherit a world more inclined to follow Beijing’s lead, not only on economic matters but also on lowering norms in such key areas as labor standards, media freedom, religious liberty and human rights. What could Trump or the president after Trump do to offset that possibility and reassert America’s place as the premiere superpower in the world today?

Well, I do think that what has happened — and I have to say, I’ve gotten to do a lot of traveling abroad in a number of different meetings — and one that is an example of something recently, I was in Morocco in December and there was a conference going on under the sponsorship of the U.N. on immigration, and I had been asked to come and speak as a former person or whatever by Louise Arbour, a Canadian who is running it. The US seat was empty. The Russians and Chinese were there, but the US seat was empty. It made me think in so many ways that the US is AWOL internationally, and AWOL in terms of some of the specific issues of where we operate — having just talked about Afghanistan and Yemen — and AWOL in terms of our values system and what democracy is about, and how we want to have as friends and allies countries that respect their people’s rights. In the meantime, the Chinese are in fact, they are on their own foreign policy trajectory which at the moment is expanding their influence. Some of it through what they call the “One Belt, One Road” in which they are providing infrastructure as well as strange kind of loans to countries to get them on their side. That’s what’s going on, that the Chinese are in fact a rising power while at the same time we are not really explaining our policies well and/or talking about our values system.

I think it is a very complex issue. I do think our relationship with China itself is complicated and we’re not very good at trying to figure out how to cooperate and compete at the same time. It’s obviously one of the most difficult relationships and a key one, and again, as the intelligence panelist explained yesterday, one that is out there as a very complicated situation for the United States.