Yes, Chuck Todd: Donald Trump is a racist "in his heart." Here's how we know

We judge people on their behavior all the time, without reading their minds. Why is Trump's racism different? 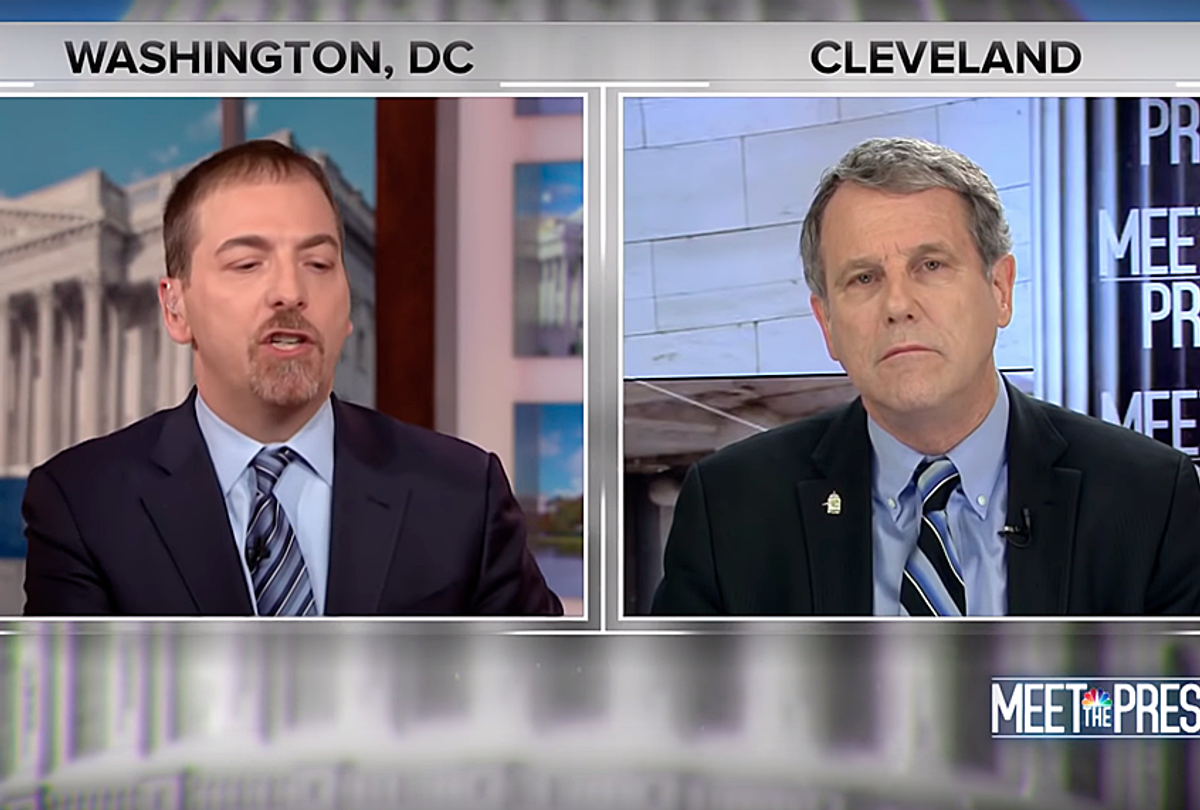 Chuck Todd and Sherrod Brown on "Meet the Press" (NBC)
--

On Sunday, Sen. Sherrod Brown, an Ohio Democrat who may soon announce a presidential campaign, appeared on NBC's "Meet the Press." Todd asked him about the recent controversy surrounding Gov. Ralph Northam of Virginia, who was discovered to have a racist photo (which may or may not include him) on his medical school yearbook page. Brown answered by noting that the "country hasn’t dealt well with the issues of race," as evidenced by the fact that we elected "a president who’s a racist."

"Let me pause you there. You believe, in his heart, he’s a racist," Todd interjected.

This is, frankly, a bizarre question. Let us imagine for a minute a person who loves, say, the Philadelphia Eagles as much as Trump loves racist language and actions. He tweets about the Eagles regularly, often using all-caps. He buys season tickets and attends every Eagles game he possibly can. He's been talking about the Eagles and watching their games for decades. He feels elated when they win and crushed when they lose. He wears his Eagles logo hat  all the time.

Would anyone look at that guy man and ask, "But wait -- is he an Eagles fan in his heart?"

No, they would not. But when it comes to Trump's avid and lifelong love of acting like a racist, we're still expected to debate whether or not it reflects what's in his heart. Trump floated conspiracy theories that Barack Obama was not born in America and had faked his academic credentials. The Department of Justice found a mountain of evidence that Trump, in the 1970s, blocked black people from renting apartments in his buildings. Trump justified this by saying he didn't want "rent to welfare cases." He spends a huge amount of time on Twitter spewing racist conspiracy theories and accusing black people of being ungrateful or having "low IQ." Arguably, no one has ever loved anything as much as Trump loves being a racist.

But for whatever reason, pundits like Todd just assume that racism is an exceedingly rare condition and difficult to diagnose. In their view, it's impossible to conclude that anyone is really a racist, no matter how much work they put into showing the world exactly how racist they are.

This focus on racism of the heart — or of the bones, thanks to the commonplace phrase, "I don't have a racist bone in my body" — makes no sense. It depends on the strange insistence that we cannot make judgments about other people based on what they say, what they do and how they live their lives.

This rule somehow only applies to bigotry. (See the way Trump is declared non-sexist in his heart by supporters like his daughter, even though he was recorded bragging about sexual assault.) In all other areas of life, the idea that we can gauge the state of someone's heart by how they act in life is not particularly controversial.

As Jamelle Bouie pointed out in 2014 at Slate, the whole "I don't have a racist bone in my body" gambit is about shifting the focus away from "'racism' as material harm" and changing the subject "from what someone said or did to who he is."

As Todd's question shows, the situation may be even more dire than that. There can be no real doubt that Trump is boiling over with personal animus toward people of color he perceives as being insufficiently deferential to him, or to white people in general. Todd's attitude seems to imply that we cannot draw reasonable conclusions about a person's character based on overwhelming evidence going back decades.

The focus on racism in the "heart" is gaslighting in its purest form. Gaslighting is a form of emotional abuse in which the victim is told they cannot trust the evidence of their own senses. In a romantic relationship, for instance, gaslighting might take the form of a man telling his wife that only a "crazy" or "paranoid" person would see the lipstick on the collar, the hotel bills on the credit card and the mysterious late-night phone calls from a woman who hangs up immediately as evidence of a likely affair.

Trump and his supporters rely heavily on gaslighting to defend the president, telling voters that it's unfair and ridiculous to draw conclusions about  his character or his corruption or his relationship with Vladimir Putin based on the scanty evidence of how Trump acts or what he says. Instead, Trump and his propagandists argue that he is entitled to a bottomless presumption of innocence and that no amount of evidence will ever be conclusive enough to declare him guilty of anything: bigotry, self-dealing, Russian collusion, bottomless fraud and corruption or anything else.

Whatever Todd's intention was, by using the phrase "in his heart" he was playing right into the hands of Trump propagandists, by setting a standard of evidence that is unattainable. "In his heart" refers, after all, to a metaphorical space. In the literal sense, all that's in Donald Trump's heart is a bunch of cholesterol plaque. Turning this into a debate about whether we can really "know" the truth about an abstract concept suits the ends of gaslighters, who love the idea that the evidence is entirely subjective and that its meaning can be quibbled about until the end of time.

This assumption that racism can only be determined by peering directly into the metaphorical space of the heart isn't just about political rhetoric, either. Republican judges are throwing out important anti-discrimination laws by claiming that "intent" — something courts readily judge based on behavior when it comes to things like murder or theft — cannot be known when it comes to discrimination.

And let's face it: The alternative explanation for Trump's behavior is that he literally spent decades — many of them before he even thought about running for president — pretending to be a racist because he somehow thought it would be more advantageous for everyone to think that about him. Or perhaps he's actually a robot programmed to act like a racist so that space aliens doing experiments on humans can gather data. Or maybe reality is all just a hallucination in the mind of an ice giant. Once you reject the idea that judgments on character can be drawn from behavior, there's no end to how silly this argument can get.

It's past time for journalists to stop treating racism as if it were uniquely unknowable and cannot possibly judged on the visible evidence of someone's words and deeds. Our conversation on this subject has got to get past this "How can we know?" space and focus instead on solutions.