Cascade of lies from the prince of lies: But don't kid yourself, his fans loved it

Trump's State of the Union was a listless torrent of falsehoods. But that doesn't mean he has been defeated 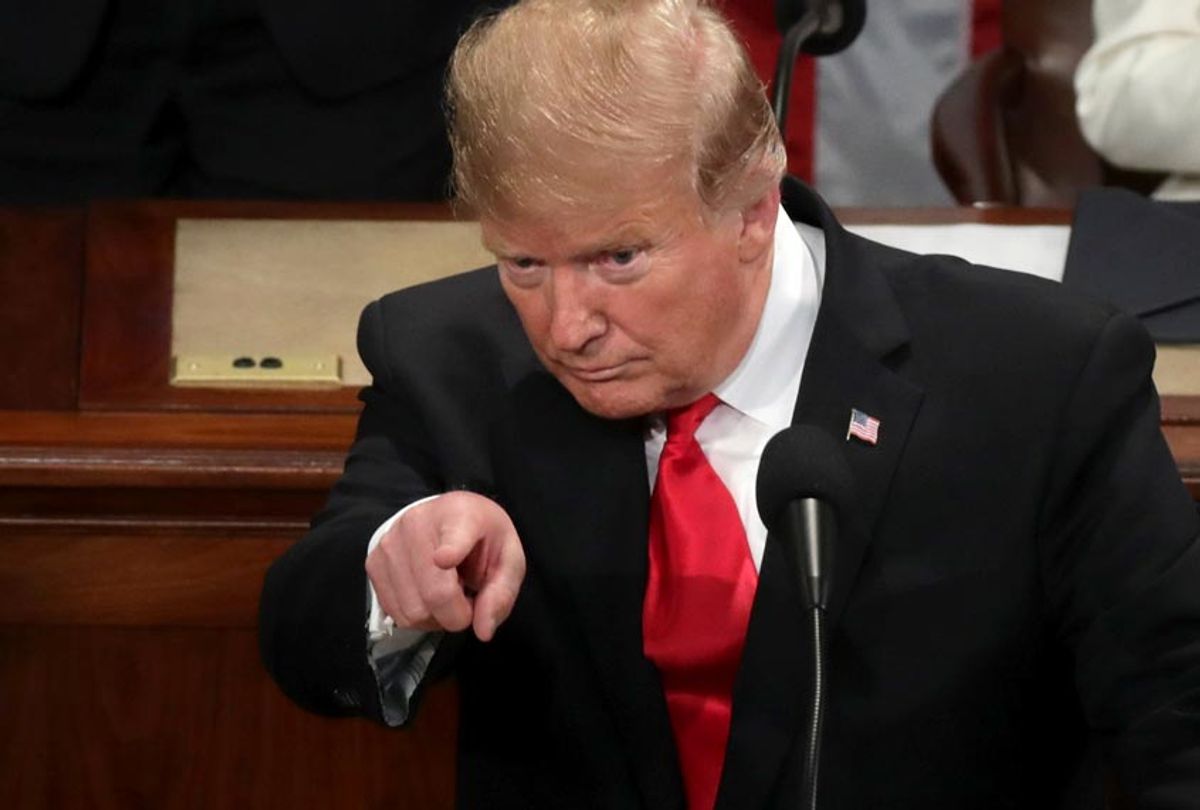 Donald Trump is a prince of lies possessed of a blinding lack of self-awareness and totally devoid of a capacity for critical self-reflection.

As the Washington Post has exhaustively documented, Trump has told at least 8,000 lies as president. Tuesday night's State of the Union address added to this total.

Contrary to Trump's claims, the state of the union is not strong. American democracy is imperiled by him and his party -- by their authoritarianism, petit-fascism, and total and utter disregard for the rule of law.

Trump wants Congress (read: the Democratic House majority) and the country (read: people who voted against him and continue to oppose him) to "reject the politics of revenge, resistance and retribution."

This is the opposite of Donald Trump's own personal life mantra and decades-long pattern of living.

Throughout his State of the Union speech Trump either lied outright or distorted the facts on a wide range of issues, including immigration, his imaginary border wall, crime, the economy, the war against ISIS, North Korea, women's rights and the drug crisis.

In his flaccid and boring address he also called back to tired Republican talking points about the evils of "socialism." Perhaps White House senior adviser Stephen Miller played the infamous 1961 recording "Ronald Reagan Speaks Out Against Socialized Medicine" for our current president before his speech.

Trump also hung up political red meat for his white evangelical supporters, who are among the most devout and loyal members of the cult of Trumpism.

Predictably, Trump's address was grotesque and full of pornographic violence. Babies are being torn from their mother's wombs and killed by Democrats. Natural-born rapists and other nebulous brown people in "Mad Max"-like "caravans" are coming to America to commit horrific crimes against white people -- especially white women. The Democrats believe in "open borders" and want such crimes to occur.

Trump, a man who has called neo-Nazis and Ku Klux Klan members "very fine people," had the unmitigated gall to use Holocaust survivors as human props. He also used a member of the Tree of Life Synagogue in Pittsburgh, where 11 people were massacred by a far-right anti-Semite, as a human prop as well. Of course he, did not discuss how  his rhetoric and policies helped to create and inspire the conditions for the mass murder which occurred there last October.

Trump, as he has before, featured the family members of a person killed by a criminal gang of "illegal aliens." And of course he never mentions that immigrants, be they legal or otherwise, commit crimes at far lower rates than native-born Americans.

Trump claimed that "all children — born and unborn — are made in the holy image of God." Yet it is was his administration's policy that put brown and black babies from Latin America in concentration camps.

Perhaps most important, Donald Trump believes he is above the law. He suggested that the safety and security of the United States depends on not holding him accountable for his likely collusion with Russia to steal the 2016 presidential election, as well as his many other apparent crimes:

An economic miracle is taking place in the United States — and the only thing that can stop it are foolish wars, politics, or ridiculous partisan investigations. If there is going to be peace and legislation, there cannot be war and investigation. It just doesn't work that way!

Commentator Van Jones described Trump's address afterward as "a psychotically incoherent speech mixing cookies with dog poop." That is largely accurate, yet Trump supporters and Republican voters in general will devour it as though it were a wonderful meal.

Part of the explanation can be found in Donald Trump's hostage-taking of the U.S. government to get money for his wall. The conventional political wisdom is that Trump "lost": His disapproval numbers increased among the general public and he was apparently forced to capitulate Nancy Pelosi and the Democrats "won" by forcing Trump to end the shutdown, at least temporarily.

Some observers have suggested that the longest government shutdown in U.S. history was the result of an inexperienced White House which had "miscalculated." This is one example among many where, in my judgment, Trump and his agents are playing a different game than the political pundits and so-called experts realize or want to accept.

Trump is not a video-game boss or comic-book supervillain possessed of amazing genius. Rather he and the conservative movement are simply playing a different game with different criteria for victory.

Their goal is not consensus, serving the common good or ensuring that the general will is served in the interest of democracy. It is victory at any cost for their "team" -- democracy and the American people be damned.

Trump's State of the Union address spoke exclusively to his right-wing public and the most extreme elements of the conservative movement, the only audience he cares about. It was successful on those terms.

As stated amid the mountain of lies that was this speech, Trump will try to give right-wing Christians a country where women do not have reproductive rights and the divide between church and state is torn away.

Huge corporations will be further empowered to despoil the earth for profits while workers are left more vulnerable. The social safety net will be cut still more.

Racist, bigots and nativists are empowered with hopes that they will get their wall, immigration "reform" and other policies designed to ensure, both symbolically and literally, that white Americans control every major aspect of the country's political, economic and social life.

The right-wing agenda has other elements as well, which Trump has masterfully advanced. Again, those who focus on the "horse race" aspect of American politics, and who still have faith in the power of previously-existing norms and traditions, are not looking in the correct place for answers. They made this mistake in the 2016 presidential race and continue to do so now.

One of this agenda's guiding principles is that government is illegitimate in itself. It is to be destroyed from within so it can be stripped away and sold off to the highest corporate bidder. The American people are just another product to be monetized and exploited under gangster capitalism.

Trump has appointed corporate executives, incompetents, and other self-interested actors to destroy the very federal agencies they ostensibly "lead." The shutdown and Trump's other policies are designed to undermine faith in the usefulness and legitimacy of the federal government when it comes to solving collective problems and enhancing the lives of the American people.

Contrary to Trump's lies about serving the common good and ensuring "prosperity" and "progress," his policies are designed to cause pain and harm to the American people in general, and particularly to nonwhite people and others viewed as not being "real Americans."

Evidence indicates, for instance, that the government shutdown caused disproportionate harm and pain to African-Americans. Federal employees are also more likely to be Democrats. Trump cares nothing for them and their well-being.

In Trump's State of the Union speech he continued to threaten that he may declare a "national emergency" if he does not get money for his wall along the U.S.-Mexico border. This will be another way for Trump to further cement his power and to weaken the country's democracy in the service of an extreme right-wing agenda.. Vijay Prashad expands on this in a recent essay at CounterPunch:

It will all make a mockery of the judicial process. Trump the destroyer would have then galloped through the institutions of the state — setting them aflame with the fires of illegitimacy. The executive branch, the presidency, is already the font of mockery. His acting secretaries are going to deepen the distrust with government. The legislature, already low in public trust, will find its legitimacy eroded further. And then, the judiciary, the final branch of government, will be set aflame. At the end of Trump’s first term in office, it is likely that trust in government will be as low as it could possibly go. If Trump is re-elected, it is likely that during the second term, the government might wither away … leaving behind a police force to patrol the disaffected U.S. population and a military to discipline the world.

Will Donald Trump's government shutdown hurt him at the polls in 2020? Likely not.

Trump's Republican supporters will never abandon him. Those Americans hurt by the government shutdown were already predisposed to vote against Trump and are not going to support him for any reason. As political scientists and others have repeatedly shown, the American people are not very sophisticated politically. A broad swath of undecided and independent voters will no longer remember the shutdown or include it in their decision-making. And if low information and independent voters do actually think about the government shutdown relative to "pocketbook voting" they may not attribute the blame correctly. They may instead choose to punish the Democrats and not Donald Trump and the Republican Party.

Last night's State of the Union address was unprecedented in various ways. It was unseemly and lifeless, but nonetheless still very disturbing. This fake billionaire and failed entrepreneur, turned racist demagogue president, is exactly the kind of existential threat to democracy that the framers warned the American people about centuries ago. They also provided a solution for such a disaster.