"You weren't supposed to do that," a visibly caught-of-guard Trump joked to women lawmakers. "Thank you very much" 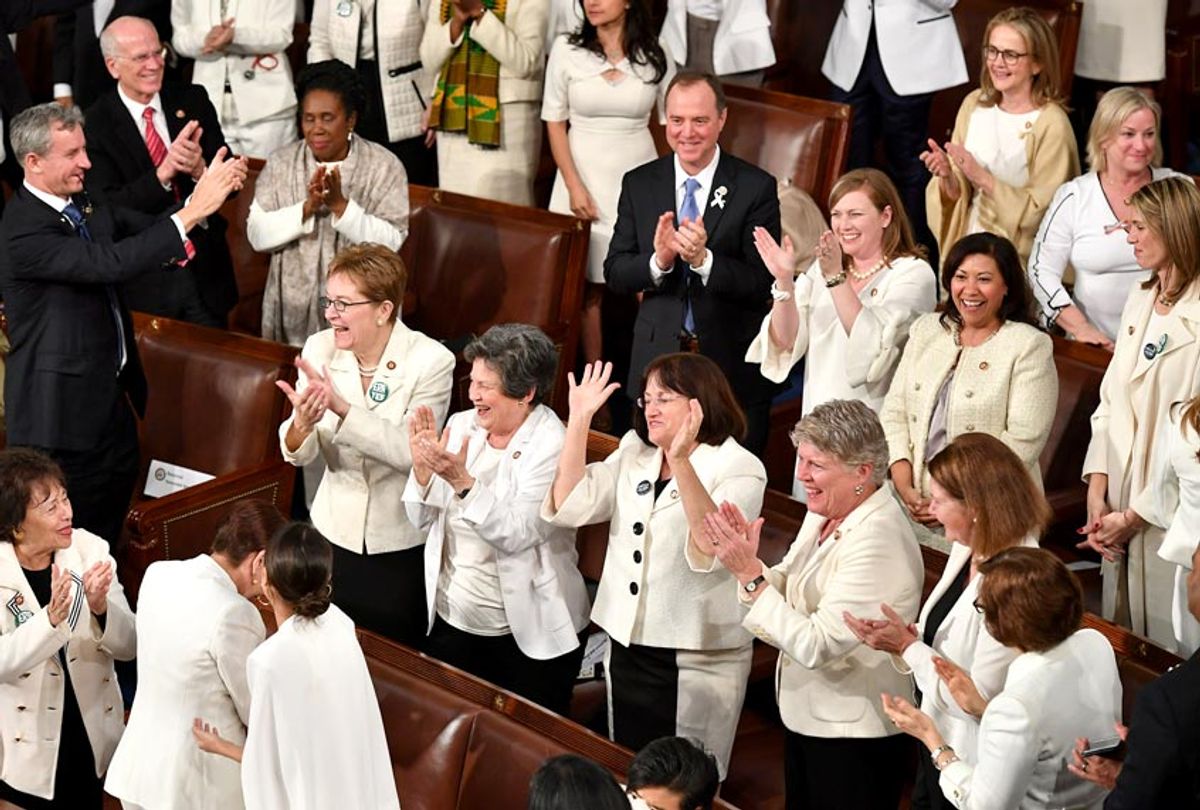 Congresswomen, dressed in white in tribute to the women's suffrage movement, applaud as they attend the State of the Union address at the US Capitol in Washington, DC, on February 5, 2019. (Getty/Mandel Ngan)
--

During his annual State of the Union address, President Donald Trump was visibly caught off guard by the response from a group of women in Congress — primarily Democrats — who stood up from their seats and applauded as he discussed how women in the workforce have prospered in the current economy.

"No one has benefited more from a thriving economy than women, who have filled 58 percent of the newly created jobs last year," Trump said as a group of female lawmakers, dressed in solidarity in "suffragette white" to show their support for women's issues, including equal pay and reproductive healthcare, rose to their feet and cheered.

Trump then urged the women to keep standing, saying "don't sit yet."

"You're going to like this: And exactly one century after Congress passed the constitutional amendment giving women the right to vote, we also have more women serving in congress than at any time," the president added.

However, the women did not seem to be clapping for the president but instead themselves. Indeed, some would argue that Trump could take some credit for the record-breaking number of women elected to Congress in 2018 – although likely not for a reason he would want to brag about.

Following the contentious confirmation of Associate Justice Brett Kavanaugh, who faced multiple accusations of sexual misconduct, to the Supreme Court in the #MeToo era, parallels were drawn between the 2018 midterms and the 1992 cycle, which is referred to as the "Year of the Woman." At the time, Clarence Thomas was appointed to a life tenure on the nation's highest court, while Bill Clinton was voted president – both in spite of allegations surrounding their treatment of women. In response, the American people voted an historic number of women lawmakers to serve in the U.S. Congress.

The House Democratic Women's Working Group publicly urged female lawmakers to wear white to the State of the Union on Monday.

"We'll honor all those who came before us and send a message of solidarity that we’re not going back on our hard-earned rights," Florida Rep. Lois Frankel, the chair of the House Democratic Women's Working Group, wrote on Twitter last week.

Frankel's congressional group, which includes all Democratic women in the House, seeks to advance issues such as equal pay for women, paid family leave and reproductive rights. Democratic congresswomen also wore white to Trump's first address to Congress in 2017 in honor of the women's suffrage movement. Last year, Democratic women dressed in black as a sign of solidarity with victims of sexual misconduct and harassment as part of the #MeToo and #TimesUp movements.