All hail HBO's "2 Dope Queens" and their unpredictable magic

Salon talks to Phoebe Robinson, one half of the regal duo returning to HBO with a series of playful specials 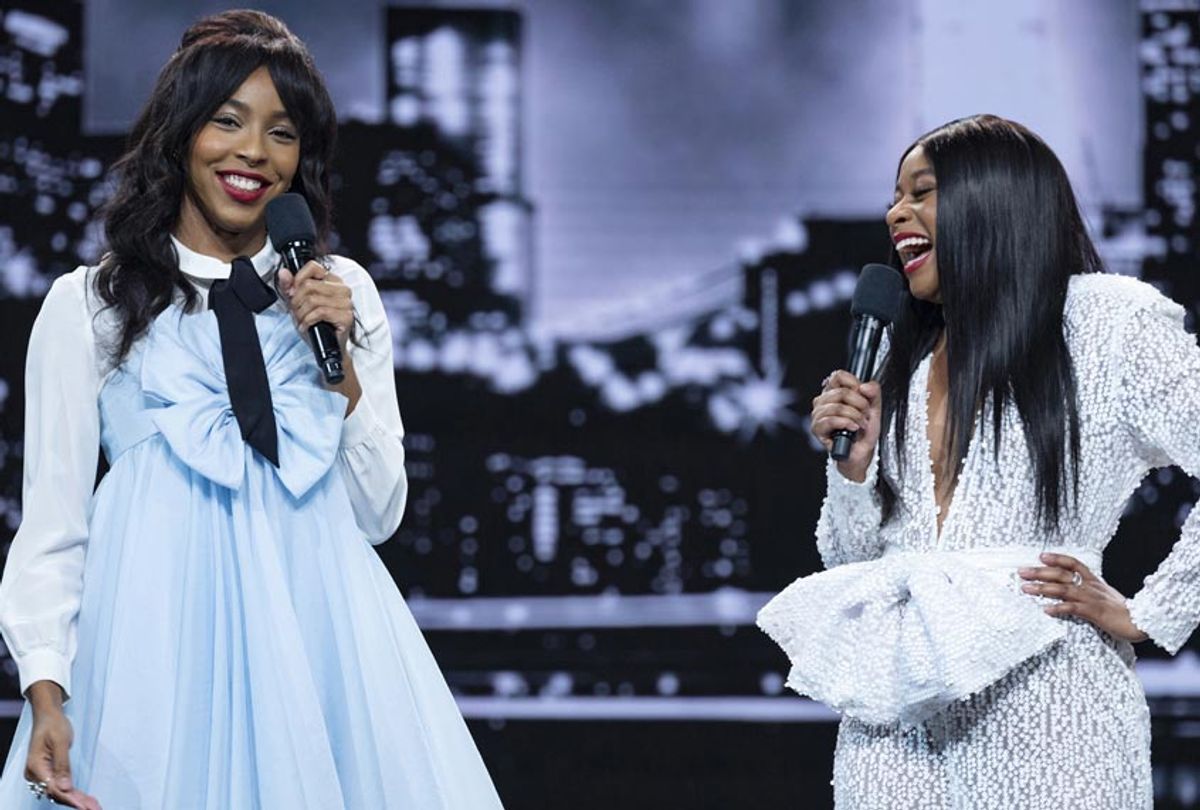 Phoebe Robinson doesn’t mind getting physical. While her “2 Dope Queens” partner Jessica Williams takes advantage of being lanky and tall, sweeping into the full arm span when the moment calls for a diva’s gestures, Robinson frequently strikes athletic poses and covers as much ground as her heels allow. During one upcoming scene, as the pair displays wand skills with Daniel Radcliffe, Robinson plays to every lens, dashing across the stage and tumbling over the furniture to make the most of every abracadabra.

Radcliffe delights in all of this; he can’t help it, as if he’d even try. The force of black girl magic is strong with this one, and that radiates through every joyful bit Robinson pulls off.

The second season of “2 Dope Queens” live specials premieres Friday at 11 p.m. on HBO, and represents the remainder of the brand that helped grow the duo's fame.

Williams already was a known factor thanks to her time as a correspondent on “The Daily Show with Jon Stewart” — at the time, the show's youngest ever. But Robinson’s solo stand-up career and her blog “Blaria LIVE!” represented the extent of her reach before she joined forces with her other Queen. The podcast they started in 2016 launched both women into a whole new stratosphere. Alas, its reign officially ended in 2018 — understandable, given how incredibly busy both of them have become. (Robinson still co-produces “Sooo Many White Guys" with “Broad City” star Ilana Glazer.)

“I've been very fortunate to sort of have my career take off  in the way that it has,” Robinson told Salon in a recent phone interview. “I've been really grateful about that because for a long time I couldn't get hired or couldn't get a job, and I was sort of still trying to figure it out. But you know, it's really just a matter of timing and like-minded people all sort of wanting to come together.”

She’s not exaggerating. Within a single decade, Robinson has transformed from a struggling comedian to a bestselling author. Her latest book “Everything’s Trash, But It’s Okay,” released in fall of 2018, became a hot topic of conversation thanks in part to a wide-read critique of white feminism featured within.

And it looks like Robinson’s lucky stars are still aligning at a speedy clip. Right now she’s appearing in the Taraji P. Henson comedy “What Men Want.” Between the first series of “2 Dope Queens” specials and now arrived “Ibiza,” the Netfilx film in which she co-stars with Vanessa Bayer and Gillian Jacobs. It joins a lengthening list of TV and film credits that already includes a multi-episode run in Jill Soloway’s “I Love Dick” and a guest star appearance in “Search Party.”

On top of that, she’s developing a series for Amazon with Amy Aniobi, a writer and producer for “Insecure.”

Something had to give. Hence, the Queens bid adieu to their podcast platform, going out in royal style with a guest to end all guests: Michelle Obama, whom Robinson interviewed as part of the former first lady’s book tour.

“I never want to half-ass anything and Jessica feels the same way,” Robinson said.  “If we can't deliver, you know, quality podcast episodes then I don't want to do it at all. For us, that’s our way of showing how much we care about the podcast, that we did that as opposed to, like, [saying] we'll just ride the train because people are listening to it and we'll just turn something sh**ty, and knowing they'll still listen because they like us.”

Rest assured the same level of care shows up in the second season of “2 Dope Queens,” four specials spotlighting up-and-coming comics of color and queer performers in addition to indulging in casual, playful appearances by Lupita Nyong’o, Lizzo, Janet Mock, Keegan-Michael Key and, as mentioned above, Radcliffe.

Through the expansion of  “2 Dope Queens” from podcast to TV specials, Williams and Robinson have brought more exposure to talent that tends to be ignored by mainstream entertainment industry bookers. Even so,  when I pointed this out to her Robinson was careful about characterizing her level of influence in Hollywood’s current inclusivity push.

“I don't want overstate the importance of Jess and I. Because I think there have been other people, you know, well before we came on the scene with ‘2 Dope Queens’ who have been doing inclusive stuff and getting diverse content out there,” she said. “Right now Hollywood is in a really interesting time and it can go a lot of different ways. What's really cool is that, you know, there's network TV, there's streaming, there's cable, and there's the Internet. That means all kinds of people who through, I guess, luck from the universe and just hard work, can get their stuff out there.”

The fact that this fresh quartet of live specials feels familiar yet freshly entertaining speaks to the particular and special role “2 Dope Queens” plays in the end-of-week late night space. Once again, Robinson and Williams have created a queendom of playfulness for their live audience at Brooklyn’s Kings Theatre Brooklyn as well  as the rest of us watching at home by entirely divorcing each show's structure from the formality and format of a standard variety show.

“Part of what the celebs like about 2 Dope Queens, as well as what I think the audience likes about it, is that it's low stakes in the interview scene,” Robinson said. “We really wanted to let the show be sort of like, ‘This is your chance to sort of hang out with this celeb in a way and that you haven't seen before.” Or get a chance to have fun with them or listened to like really cool, you know, nuggets of wisdom they want to drop.”

That said, Radcliffe stars in a new TBS comedy “Miracle Workers,” debuting Tuesday, and Nyong’o tops the cast of Jordan Peele’s highly anticipated horror film “Us.” But Robinson and Williams choose to call upon the “Harry Potter” star’s views on friendship chemistry (fitting for a special titled “Nostalgia”) while Nyong’o showed off her hair braiding skills for the “Fashion” episode.

If you didn’t know these trivia tidbits, it wouldn’t matter — the onstage antics and easy casual conversation between the pair is where the charm of the Queens is seated, separately and together. This approach also evokes a feeling of comfort missing from other talk shows that’s at once enticing and, oddly enough, relaxing.

There’s no telling right now whether these four specials represent the last time we’ll see these women perform together under the royal banner they’ve created for themselves, even though it’s obvious we’ll be seeing much more of Williams and Robinson separately. But their loyal subjects aren’t out of bounds to wish that their paths will bring them back together for a special or four on a regular basis, if only to grant viewers a few pockets of relief, which are increasingly tough to find these days.

For her part, Robinson remains sanguine about where her career is taking her. “What I want to do, and try to do, is things that people are into," she said. "I'm really appreciative of that and I hope that that lasts for a really long time. But if not, hopefully I will make a mark and then someone else can carry the baton and do even more than what I've done.”