Democratic 2020 candidate Kamala Harris fires back at critics: "I was born black—I will die black" 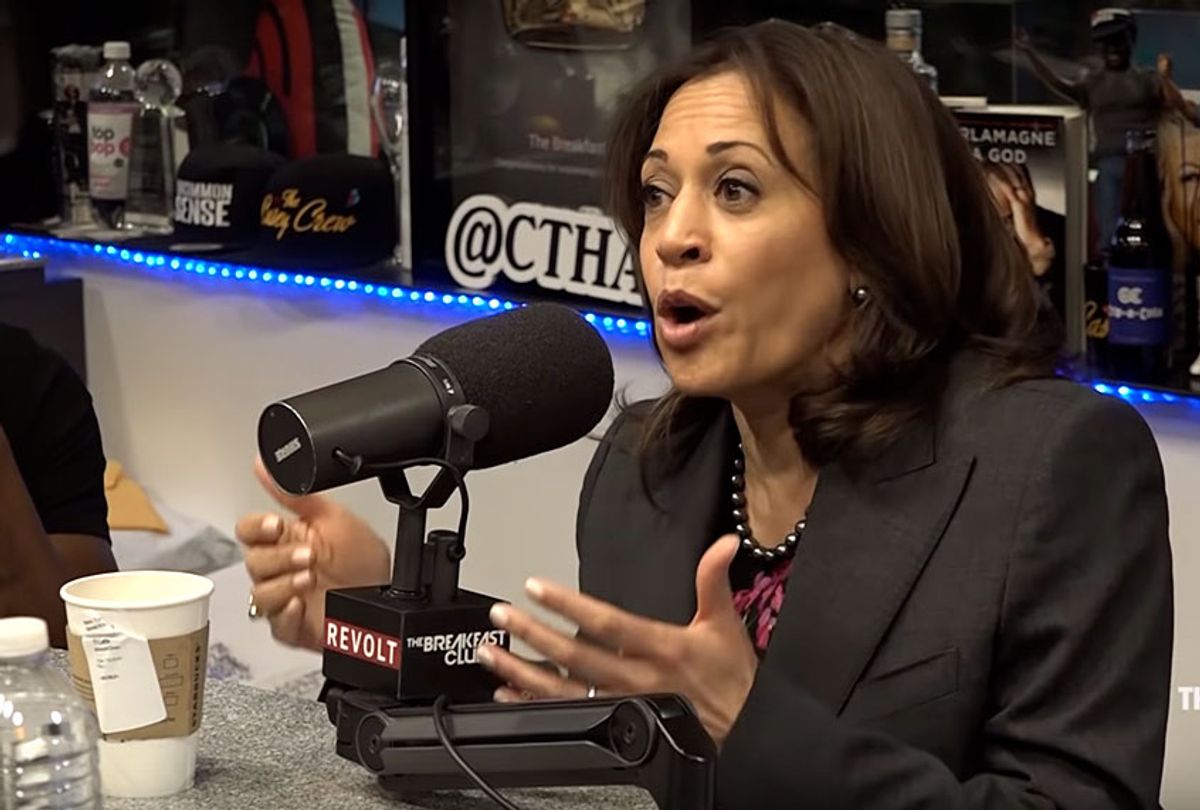 Sen. Kamala Harris (D-Calif.) fired back at critics who have questioned her black heritage, her prosecutorial record incarcerating minorities and her decision to marry a white man.

In an interview with The Breakfast Club hosts DJ Envy and Charlamagne Tha God that aired Monday, the show's hosts asked the California Democrat to respond to a series of disparaging memes that have been circulated on social media. Charlamagne Tha God cited a meme that said Harris is "not African-American," because her parents were immigrants from India and Jamaica and she spent her high school years in Canada.

"So I was born in Oakland, and raised in the United States, except for the years that I was in high school in Montreal, Canada," Harris responded with a laugh. "And look, this is the same thing they did to Barack (Obama). This is not new to us, and so I think that we know what they are trying to do."

"They are trying to do what has been happening over the last two years – which is powerful voices trying to sow hate and division – and so we need to recognize when we're being played," Harris continued.

Charlamagne Tha God followed up by asking Harris how she addresses questions about "the legitimacy of your blackness."

"I think they don't understand who black people are," Harris answered. "I'm not going to spend my time trying to educate people about who black people are, because right now, frankly, I'm focused on, for example, an initiative that I have that is called the 'LIFT Act' that is about lifting folks out of poverty." (Harris' legislation would offer tax credits of up to $500 each month to help working families confront the increased costs of living in America.)

"I'm black, and I'm proud of being black," Harris said at a later point in the interview. "I was born black. I will die black, and I'm not going to make excuses for anybody, because they don't understand."

The Democratic senator also highlighted her support for legalizing marijuana, acknowledging that she smoked a joint "a long time ago" as she pushed back against accusations that she has opposed efforts to legalization.

"I have," Harris said when asked by host Charlamagne Tha God if she had ever smoked marijuana. "And I did inhale," she continued, joking and seemingly invoking former President Bill Clinton's infamous line from the campaign trail in 1992 that he had "experimented with marijuana a time or two" but "didn't inhale."

Harris also pushed back against accusations she has tried to keep the drug from becoming legalized, claiming they are not true.

"That's not true. Half my family's from Jamaica, are you kidding me?" she asked, laughing.

Harris come under scrutiny for laughing off a question about legalization of recreational marijuana in 2014 when she was running for reelection as California attorney general.

Nationwide support for legalizing recreational marijuana has since grown, according to an October survey released by the Pew Research Center. The poll found that 62 percent of Americans favor legalization. Currently, 10 states and Washington, D.C., have legalized recreational marijuana, while 33 have legalized medical marijuana. Sen. Ron Wyden (D-Ore.) introduced legislation las week to legalize the drug at the federal level.

On Monday, Harris was also asked about the backlash she has faced on social media for marrying a white man.

"Look, I love my husband, and he happened to be the one that I chose to marry, because I love him — and that was that moment in time," Harris said. "And that's it – and he loves me."

You can watch the full interview here: