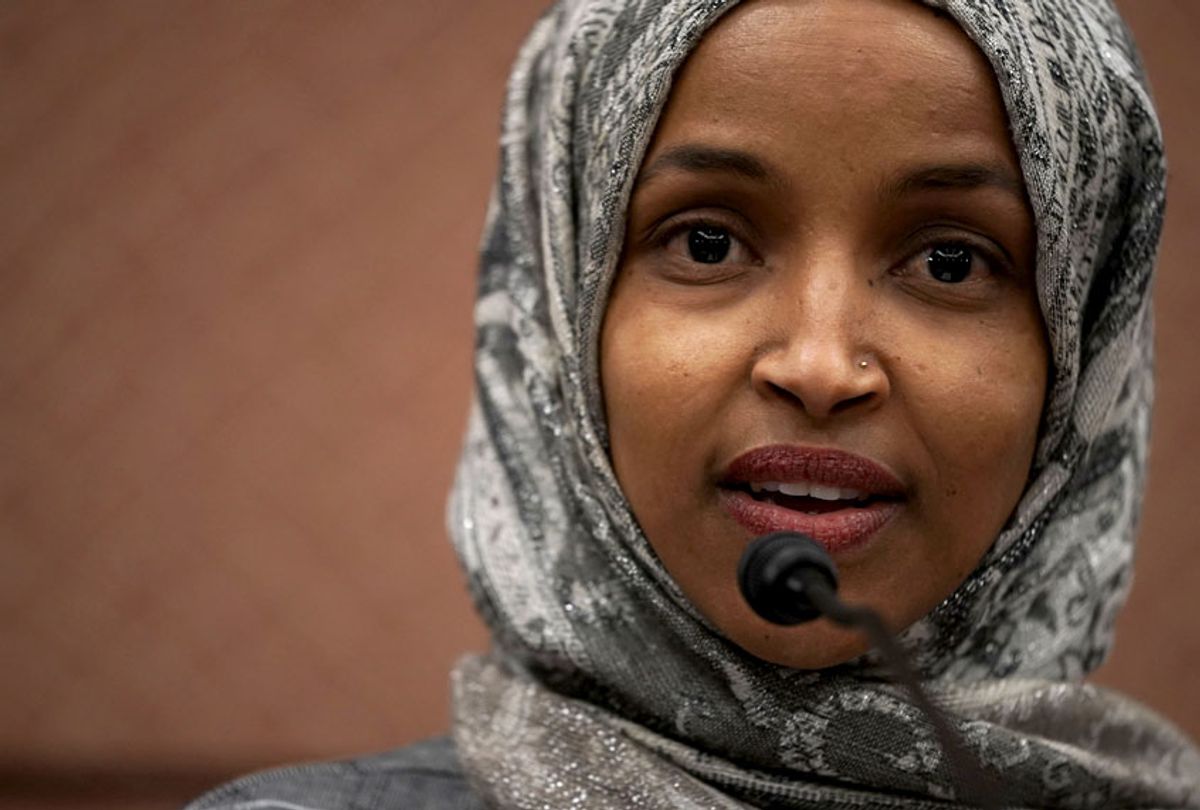 Rep. Ilhan Omar, a freshman Democrat from Minnesota, issued an apology on Monday afternoon after House Speaker Nancy Pelosi and several other leading Democrats accused her of spreading "anti-Semitic tropes."

Earlier on Monday, Pelosi and other Democratic leaders had released a statement condemning Omar's statements:

Congresswoman Omar's use of anti-Semitic tropes and prejudicial accusations about Israel's supporters is deeply offensive. We condemn these remarks and we call upon Congresswoman Omar to immediately apologize for these hurtful comments.

This controversy erupted when Omar responded to a tweet by journalist Glenn Greenwald of the Intercept, who criticized House Minority Leader Kevin McCarthy for his attacks on Omar and Rep. Rashida Tlaib, D-Mich., over perceived anti-Semitism. (Both congresswomen are Muslim.) "It's stunning how much time US political leaders spend defending a foreign nation even if it means attacking free speech rights of Americans," Greenwald wrote.

In her retweet of Greenwald's post, Omar added, "it's all about the Benjamins baby." When Batya Ungar-Sargon of the Forward, a Jewish publication, asked Omar what source of money she was referring to, Omar responded, "AIPAC," meaning the influential pro-Israel lobbying group.

Jeremy Ben-Ami, president of the liberal pro-Israel nonprofit group J Street, struck a cautious tone in his own Monday statement, and avoided criticizing Omar by name:

Elected officials should be particularly sensitive and careful on the question of the role played by campaign contributions in influencing US policies toward Israel and the Middle East. There is no doubt that money often plays a major role in our political system. At the same time, elected officials must be extremely aware that tropes about Jewish money and political influence have been used for centuries to target and stigmatize our community. Indeed, such tropes featured alarmingly in the campaign ads of Republican candidates during the 2018 election cycle. This kind of rhetoric and imagery has never been the exclusive province of left or right, and both Democrats and Republicans should be hyper-vigilant to ensure that it has no place in our political discourse.

Elected officials should also refrain from labeling all criticism of Israeli actions or policies as "anti-Semitic," in a transparent effort to silence legitimate discussion and debate. Such attacks only undermine the vital effort to counter the actual scourge of anti-Semitism in the United States and around the world.

Omar isn't the only freshman Democratic congresswoman to get in trouble for allegedly anti-Semitic remarks. Tlaib sparked controversy last month when she tweeted that those who wish to deter boycotts of Israel had "forgot[ten] what country they represent. This is the U.S. where boycotting is a right & part of our historical fight for freedom & equality. Maybe a refresher on our U.S. Constitution is in order, then get back to opening up our government instead of taking our rights away." That referred to a Senate bill that would have permitted state and local governments to ban contracts with any companies or groups who support a boycott of Israel.