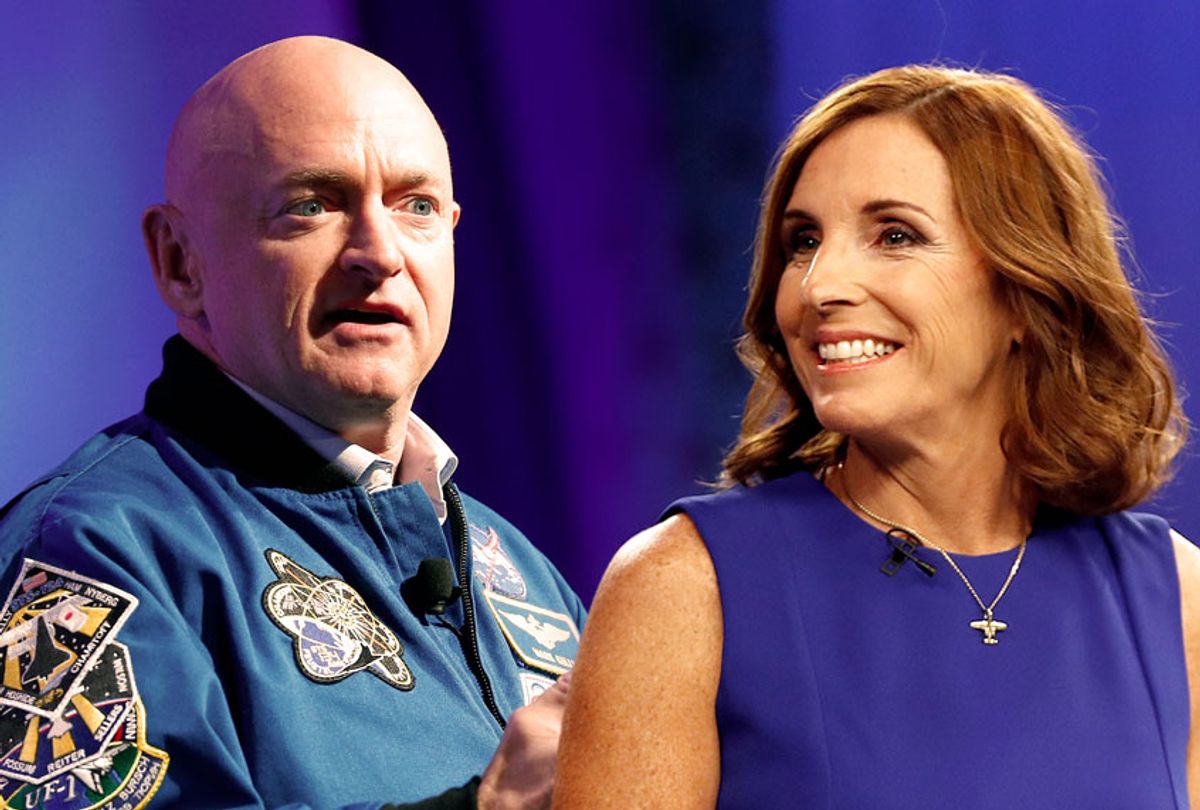 Mark Kelly, the acclaimed astronaut who became a political activist after his wife, Rep. Gabrielle Giffords, was nearly assassinated eight years ago, has announced plans to run as a Democrat for the late John McCain's former U.S. Senate seat. It is currently held by Sen. Martha McSally, a Republican who lost her race for Senate last year but was then appointed to fill the seat left vacant after McCain's death.

In a video posted to Twitter that officially announces his candidacy, Kelly can be seen reviewing his life story while Giffords sits by his side. He discusses being an identical twin, having a mother who was highly successful in her law enforcement career, serving during Operation Desert Storm and then the tragic near-death of his wife, Giffords, who was shot and severely injured while meeting constituents in her Tucson-based congressional district.

From there Kelly's video discusses his efforts to help Giffords during the recovery process, with Kelly explaining that he had to think clearly and make good decisions. He concludes by saying that Giffords taught him how policy can be used to improve people's lives and that he wants to focus on issues like affordable health care, climate change, wage stagnation and job creation. Kelly blames those problems on gerrymandering, corporate influence in politics and hyper-partisanship, offering himself as an antidote to those problems.

"Captain Mark Kelly’s life has been spent committed to public service, and 314 Action’s network of more than 500,000 pro-science advocates is excited for him to continue that commitment by running for U.S. Senate in Arizona," Ted Bordelon, director of communications at 314 Action, a pro-science advocacy organization, said in a statement. "Captain Kelly’s experience as an astronaut who has seen earth from space has informed his life’s work and make him uniquely suited to lead on so many issues — importantly, on climate change. Our grassroots network looks forward to supporting his candidacy."

Kelly and Giffords have also been vocal proponents of gun control measures, a crusade that they detailed in a 2014 book that discussed their unsuccessful effort to push for stronger gun legislation in the Senate:

In the final tally, 54 voted in favor, 46 against. Four Republicans, including Arizona’s John McCain, supported the bill. Though we achieved a majority, we failed to reach the required 60. We lost.

Patricia Maisch, our friend who had made sure Jared Loughner could not reach another magazine and reload after he shot Gabby that horrible morning in Tucson, was in the Senate gallery.

“Shame on you!” she screamed when Vice President Joe Biden read the final vote. As officers escorted Maisch from the building, she had a few choice words for the senators.

“They are an embarrassment to this country, that they don’t have any compassion or care for people who have been taken brutally from their families,” she said. “I hate them.”

It is unclear whether Kelly will follow the advice of Salon reporter Shira Tarlo and use Ariana Grande's "NASA" as his campaign song.