"This is what happens when a president calls a #FreePress the 'enemy of the people,'" Swalwell wrote on Twitter 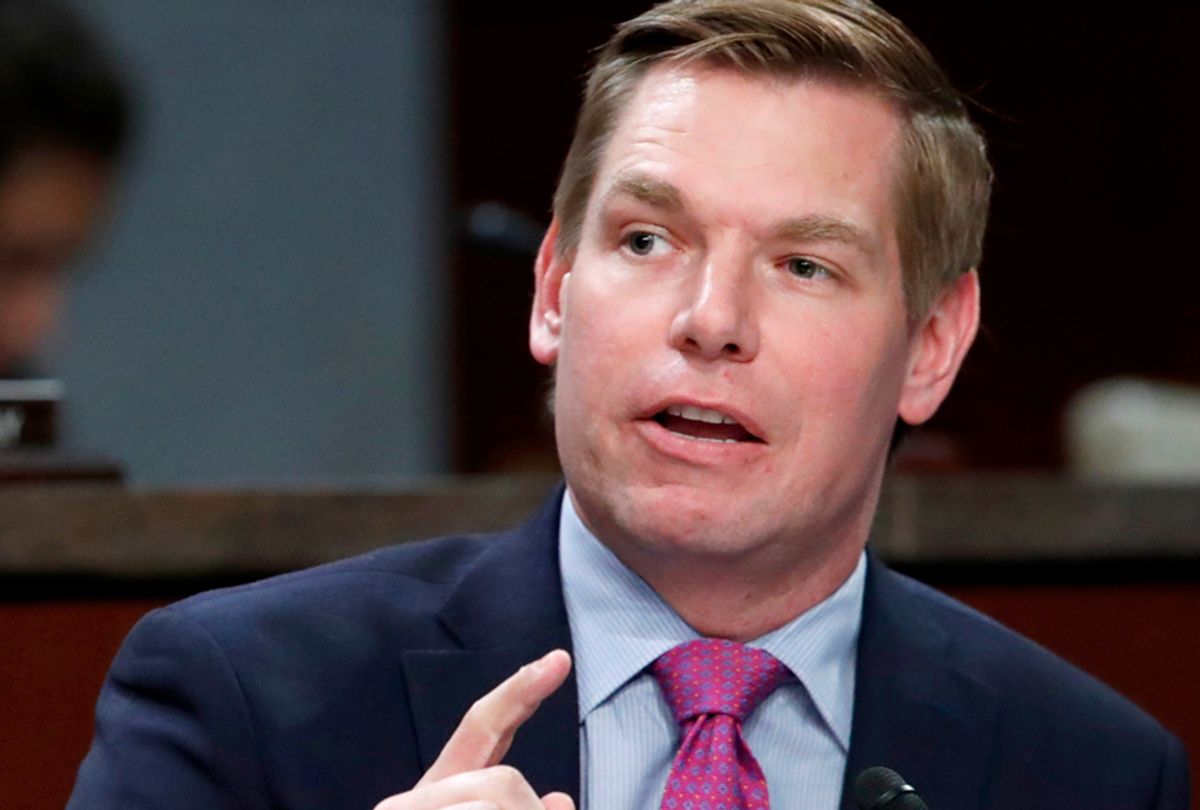 Rep. Eric Swalwell (D-Calif.) announced he would re-introduce the "Journalist Protection Act" on Tuesday, one day after a BBC cameraman was violently shoved during President Donald Trump's rally in El Paso, Texas.

"This is what happens when a President calls a #FreePress the 'enemy of the people' and whips his rallies into a frenzy. Assaults must not be tolerated, and I look forward to re-introducing the #JournalistProtectionAct along with @SenBlumenthal," Swalwell wrote on Twitter, referring to his co-sponsor Sen. Richard Blumenthal (D-Conn.).

Footage from Ron Skeans' camera, the BBC cameraman who was shoved, shows that he and his equipment were knocked off balance for around 10 seconds as he was filming Trump's speech. Skeans recovered and pivoted to filming his alleged attacker, a man wearing a red "Make America Great Again" cap, being restrained and shouting at Skeans and other news crews, "F*ck the media." As the MAGA-hat wearing man was being pulled away, the crowd could be heard chanting, "Let him go!"

The BBC's Washington correspondent Gary O'Donoghue later said a Trump supporter got on a media platform and pushed the camera into Skeans before continuing to push him. O'Donoghue said his colleague was "fine" despite the "incredibly violent attack."

"It was an incredibly violent attack. Fortunately, our cameraman is fine. He is made of stern stuff," O'Donoghue told the "Today" program on BBC Radio 4.

Skeans told the BBC that a "very hard shove" came from his blindside, catching him by surprise. "I didn't know what was going on," he claimed.

The BBC said it had written to White House press secretary Sarah Sanders to ask for a review of security arrangements for the media at Trump's rallies. Trump saw the attack and confirmed Skeans was well with thumbs up after it happened, according to the news outlet.

The press freedom group Reporters Without Borders said they were "deeply concerned" by the "physical attack against a BBC cameraman at a Trump rally."

"As we continue to look into what happened, we firmly denounce all physical violence against reporters for doing their jobs," the group said in a tweet. "This is unacceptable in the country of the first amendment."

Trump has waged a war on the First Amendment throughout his time in the Oval Office, frequently slamming critical media coverage of him as "fake" news. At an October 2018 rally, Trump brazenly celebrated an attack on American reporter Ben Jacobs, who was body-slammed to the floor in May 2017 after he asked then-candidate Greg Gianforte questions about health care.

"By the way, never wrestle him," Trump said of Gianforte at a campaign rally. "You understand that? Never. Any guy that can do a bodyslam, he's my kind of . . . he's my guy. I shouldn't say this. But there's nothing to be embarrassed about!"

Trump went on to recount how he heard about the assault while he was in Rome after already having endorsed Gianforte. He expressed concern that the assault would hurt Gianforte's election chances, then added: "I said, 'Wait a minute, I know Montana pretty well. I think it might help him. And it did."

He has also threatened to revoke NBC's broadcast license amid attacks on fake news — a decision that his FCC chairman rejected. Trump has also claimed it's "disgusting that the press is able to write whatever it wants to write," banned specific reporters from press briefings, insulted reporters of color, and revoked a journalist's press pass.

Swalwell first introduced the Journalist Protection Act in February 2018, which he said aims to protect "journalists in every corner of our country if they are attacked physically while doing their job." At the time, he told CNN that Trump has created a "toxic atmosphere" in which people feel emboldened to attack members of the press.

"I really wish I didn't have to introduce this, but we have seen rhetoric from the president declaring the media as the 'enemy of the state,'" Swalwell said.