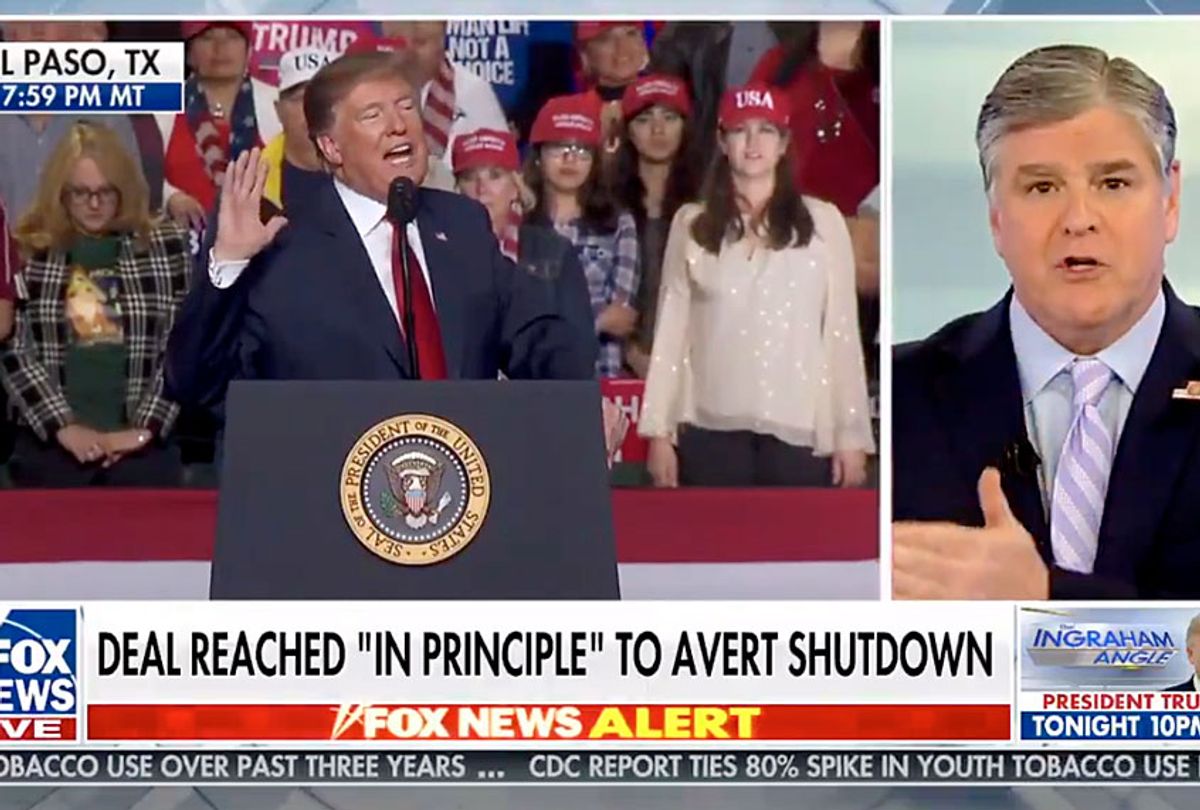 Fox News host Sean Hannity slammed reports of an immigration and border security deal reached between Democrats and Republicans in Congress as he was covering President Donald Trump's rally in Texas Monday night. At the time, few details were publicly available.

In a segment on his show, Hannity warned that any Republican supporting a compromise with Democrats that did not involve full funding Trump has demanded for his proposed wall along the U.S.-Mexican border would "have to explain" his or her positions. Hannity urged Republican lawmakers not to back what he called a "garbage" compromise.

"By the way, on this new so-called compromise, I am getting details . . . $1.3 billion?" Hannity asked, referring to a figure reportedly agreed upon by lawmakers. The funds would be allocated to build 55 miles of new border fences, the Washington Post reported, a figure the "Hannity" host suggested was peanuts compared to the $5.7 billion Trump had previously demanded for the construction of 200 miles of walls along the southern border.

"That's not a – not even a wall. A barrier?" Hannity griped as Trump attempted to advocate support for his wall at the rally, located about one mile from the U.S.-Mexico border. "I'm going to tell [you] this tonight. We will get back into this tomorrow. Any Republican that supports this garbage compromise, you'll have to explain [it.]"

Hannity, who acts as an informal adviser to the president, went on to cite a recent CBS News poll of Trump's remarks on the night of his State of the Union address, which indicated as high as 72 percent support from viewers for the president's ideas on immigration.

"Look at this crowd. Look at the country," Hannity continued. "Look at CBS News. Even they say 72 percent of the American people want the heroin to stop, the cartels to stop, the gang members to stop and those that wish us ill."

Hannity's comments came minutes after bipartisan lawmakers on Capitol Hill announced that negotiators had reached an agreement "in principle" to avert a second government shutdown over border security and immigration.

"Our staffs going to be working feverishly to put all the particulars together, and that's all we can tell you now without getting into  numbers and everything," Senate Appropriations Chairman Richard Shelby (R-Ala.) said, according to ABC News. "But it's something that is the product of all of our work, and we believe if this becomes law, of course it would open the government."

"Not a single one of us is going to get every single thing we want," Sen. Patrick Leahy (D-VT) said, regarding his work with Shelby, per ABC. "Nobody does, but we’re going to get what is best for the United States."

Hannity has previously pressed Trump on his desire to declare a national emergency at the border, which the president believes would allow him to secure funds for the wall he repeatedly promised Mexico would pay for throughout the 2016 campaign trail. Declaring a national emergency would allow Trump to start constructing his wall immediately by circumventing the legislative approval required from Congress. Republicans lawmakers and White House officials, including Jared Kushner, have indicated they would prefer Trump not to rely on such an option to build the wall because of the legal challenges that would follow. The national emergency option is still on the table.