Donald Trump at State of the Union: If there's going to be legislation, there can't be investigation 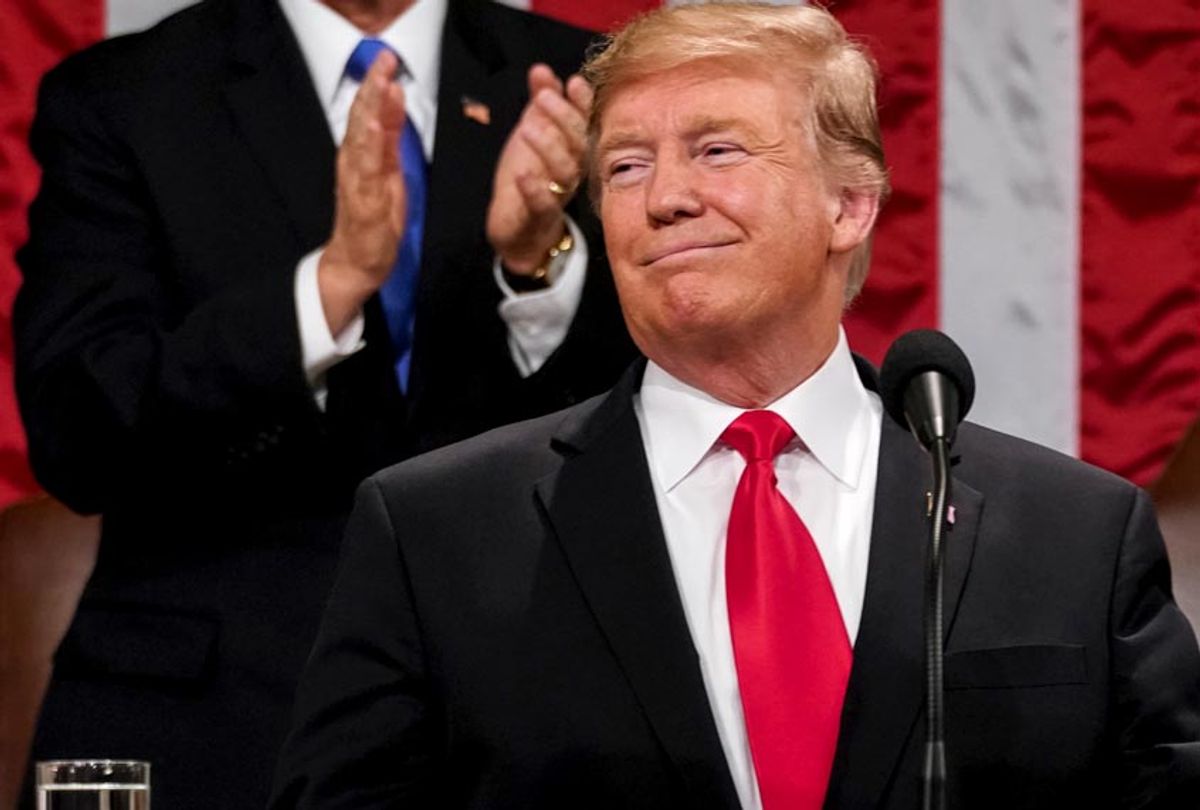 The "policy agenda both parties can rally behind" that President Donald Trump pitched to a joint session of Congress on Tuesday in his second State of the Union address included a direct statement that "ridiculous" investigations could potentially hinder the passage of federal legislation and the economy.

"An economic miracle is taking place in the United States — and the only thing that can stop it are foolish wars, politics or ridiculous partisan investigations," Trump said as Republicans cheered and Democrats sat stone-faced.

"If there is going to be peace and legislation, there cannot be war and investigation," Trump continued. "It just doesn't work that way."

House Speaker Nancy Pelosi (D-Calif.) appeared to signal to her caucus that members should not respond to the president's threat. Meanwhile, the pool camera in the chamber of the People's House panned across Rep. Adam Schiff (D-Calif.), the chairman of the House Intelligence Committee, catching what seemed to be a laugh.

While Trump did not specify which investigations he was referring to during his address, the president has consistently attacked special counsel Robert Mueller's probe into possible collusion between the Russian government and his 2016 presidential campaign as a politically-motivated "witch hunt."

With their oversight duties newly restored by American voters in the 2018 midterms, House Democrats, Schiff included, have launched a flurry of investigations into the president's administration. During Trump's first two years in office, both the House of Representatives and the Senate were under Republican control.

In the 48 hours leading up to the State of the Union, news broke that federal prosecutors in New York were probing Trump's presidential inauguration committee over allegations of financial abuses linked to the more than $100 million in donations raised for his inauguration — the most of any in American history. Additionally, CNN was the first to report that federal prosecutors in New York had requested interviews in recent weeks with executives of the Trump Organization.

On Tuesday evening, Trump further revealed that he would meet North Korean leader Kim Jong Un later this month in Vietnam for a second nuclear summit. Without providing evidence, Trump claimed that the U.S. would be in "major war" had he not been elected commander-in-chief.

"If I had not been elected president of the United States, we would right now, in my opinion, be in a major war with North Korea," he said.

Those three lines overshadowed what was widely expected to be the tentpole of Trump's address, which provided the president with another opportunity to pitch his long-promised $5.7 billion "wall" along the U.S. Mexico border to the American people. Trump urged Republicans and Democrats to come together Tuesday to "confront an urgent national crisis" at "our very dangerous southern border" that he claimed includes crime, drugs and human trafficking caused by illegal immigration.

Sparring over the president's proposed border wall led to a record 35-day partial shutdown of the federal government over Congress' inability to pass a spending package that included the funds he has claimed is necessary to build his wall along the southern border. Trump and congressional Democrats reached a deal last month to reopen the government for three weeks until Feb. 15, while negotiations continue over border security and a spending package that includes the billions he has requested to construct the wall he promised Mexico would pay for while on the 2016 campaign trail. That deadline is quickly approaching.

"Now is the time for Congress to show the world that America is committed to ending illegal immigration and putting the ruthless coyotes, cartels, drug dealers and human traffickers out of business," Trump said in his address.

"We have a moral duty to create an immigration system that protects the lives and jobs of our citizens," Trump added. "No issue better illustrates the divide between America's working class and America's political class than illegal immigration. Wealthy politicians and donors push for open borders while living their lives behind walls and gates and guards."

The president notably did not use his address as a vehicle to declare a national emergency, as he has threatened to do in order to secure funds for the wall he repeatedly promised Mexico would pay for on throughout the 2016 campaign trail. Declaring a national emergency would allow Trump to start constructing his wall immediately by circumventing the legislative approval required from Congress. Republicans lawmakers and White House officials, including Jared Kushner, have indicated they would prefer Trump not to rely on such an option to build the wall because of the legal challenges that would follow.

Elsewhere in his speech, the president attempted to call for American unity as he presented a theme of "choosing greatness."

"The agenda I will lay out this evening is not a Republican agenda or a Democrat agenda," Trump told Congress it the beginning of his prime-time address. "It is the agenda of the American people."

"Together, we can break decades of political stalemate. We can bridge old divisions, heal old wounds, build new coalitions, forge new solutions and unlock the extraordinary promise of America's future. The decision is ours to make," the president continued.

With the longest government shutdown in American history over and the looming possibility of a new one in the coming days, Trump attempted to call for bipartisanship as he listed his administration's accomplishments when it comes to criminal justice reform, trade deals, energy production and the economy. Those were juxtaposed with fear-driven talking points of illegal immigration, partisan investigations and international war.

The president also vowed to lower prescription drug prices, saying, "It is unacceptable that Americans pay vastly more than people in other countries for the exact same drugs, often made in the exact same place. This is wrong, unfair and together we can stop it."

Tuesday night's address symbolized a new reality for the president, as it was his first State of the Union address since the 2018 midterm election cycle, in which the Democrats seized control of the House of Representatives. The last time Trump gave a State of the Union speech, only Republicans (Vice President Mike Pence and former House Speaker Paul Ryan) were seated behind him. This time around, recently-elected House Speaker Nancy Pelosi, a Democrat who has clashed with Trump on the morality of his border wall, stood behind the president, pointing to the fact that he will now negotiate with and be held accountable by Democratic-controlled House lead by a woman legislator.