Scandal double standard: Dems pay the price for every misdeed, while the GOP skates

Elizabeth Warren's ancestry, or the Virginia mess, are huge stories — but we can't even keep track of GOP crimes 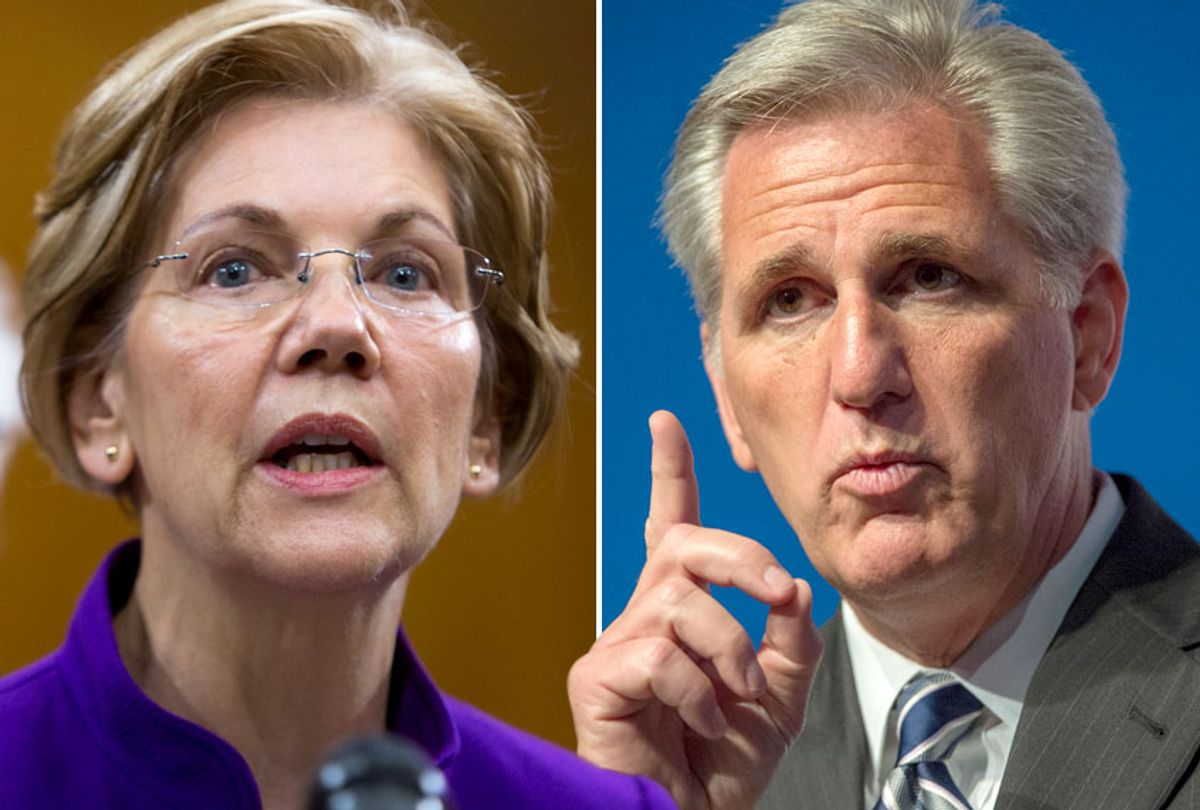 In case you’re just joining us, there’s a thing going around about Elizabeth Warren and her ethnic heritage. The short version is this: On several official documents and forms, the Massachusetts senator and newly-declared presidential candidate noted her race as Native American or American Indian. Not long ago, Warren submitted to one of those DNA services that determined she did indeed have some Native ancestry, but it was several generations in the past.

Got it? If you happen to be shocked by this news, you’re too easily shocked, especially given the unprecedented hellscape of malfeasance, lies and fraud perpetrated by Donald Trump and his crime family. Yet the conventional wisdom inside and outside the Beltway has metastasized: Warren’s misstatements or misguided assumptions about her heritage are disqualifying, and she is now too badly damaged to compete successfully in next year’s primaries and caucuses.

The fact that Warren's ancestry is still a thing after all this time is another staggering example of the double standard we’ve observed since the 2016 election. As long as Trump continues to flood the zone with crazy-bombs, preventing any individual scandal from occupying headlines, he’s able to continue serving as president with an incomprehensibly not-awful approval poll average of around 42 percent. Contrastingly, Warren is all but written off because of one thing, and it’s not even a real thing.

What do I mean by saying it’s not a real thing? Almost no one remembers this, of course, but back in October the Los Angeles Times reported that House Minority Leader Kevin McCarthy has a Native American heritage scandal of his own. A company called Vortex Construction, owned by the Republican leader’s in-laws, received $7.6 million in government contracts through a program designed to assist “disadvantaged minorities.” It’s also worth noting that the no-bid federal contracts were given to Vortex for projects inside McCarthy’s congressional district.

It turns out that McCarthy’s brother-in-law, William Wages (who looks more Caucasian than Warren, by the way), told the Small Business Administration that he’s one-eighth Cherokee. But the group to which he claims membership, the Northern Cherokee Nation, “has no federal or state recognition as a legitimate tribe.” According to the article, “It is considered a fraud by leaders of tribes that have federal recognition.”

We don’t remember this micro-scandal because it wasn’t picked up and mercilessly beaten to death on cable news.

Part of the reason for why McCarthy’s scandal got little or no attention is because there isn’t an unspooled Democratic leader firing off out horrendously racist “Pocahontas” and Trail of Tears tweets as Trump keeps doing about Warren. (The troll-in-chief has to troll.) Consequently, the television news media doesn’t pay any attention to the McCarthy story, which means voters don’t pay attention either. And when reporters notice that voters don’t care, the conventional wisdom calcifies.

The circle of crapola goes the other way, too: Trump says “Pocahontas” is a fraud; the news media picks up the tweets and runs them without debunking them; voter outrage grows; the Beltway reporters note the outrage and then tell Chuck Todd on "Meet the Press" that it’s a disqualifying scandal for Warren because voters are pissed. But why are they pissed, if they actually are? Because the press told them to be.

See? And Trump wonders why Democrats are so angry.

As if that weren’t objectionable enough, there’s never any effort to put the Native American story in the proper context. How does Warren’s thing stack up to other scandals? Is this as bad or worse than Kevin McCarthy’s brother-in-law receiving millions in taxpayer funds because he claimed membership in a disputed tribe? Should we care about this as much as, say, the fact that literally every major organization linked to the Trump family is under state and federal investigation for rampant fraud? Context be damned in the face of publishing more screamer headlines about -- say it with me -- Democrats in disarray.

The formula is repeated once again when examining the Ralph Northam and Justin Fairfax situation in Virginia. While Democrats (in disarray, apparently) properly call for the resignations of both the governor and lieutenant governor, Republicans continue to circle their orange wagons around Trump.

Yes, what Northam did is unforgivable, and the sexual assault allegations against Fairfax look damning. Nevertheless, the Republicans and even Trump himself pile onto the Virginia Democrats as if Fox News and the GOP hadn't gaslighted the world by shrugging off Trump’s trespasses as “locker room talk” or some other form of non-threatening gaffe.

Yeah, Northam’s blackface was racist, but let's not forget that Trump himself defended neo-Nazis as “very fine people” in the wake of the turmoil in Charlottesville -- even after one of the aforementioned Nazis committed an act of terror leading to the death of Heather Heyer. Years ago, Trump demanded the death penalty for the young black and Latino men known as the Central Park Five, convicted of a rape they didn't commit. He investigated whether President Obama was born in Kenya because, gasp, Obama’s black and partly grew up overseas and therefore is not exactly a real American. How many Mexicans are rapists, Mr. President? He continues to traffic in racist memes about Native Americans, going so far as to make a crack about the Trail of Tears, of all things, a nightmarishly dark chapter in American history in which Trump’s political hero, Andrew Jackson, sentenced thousands of Cherokee to death as he forcibly relocated the tribe from Georgia to Oklahoma, making room for more white slave-owners.

We could sit here for days listing all the horrifying and fraudulent deeds of Trump and his people. Once again, however, Trump’s firehose of news disintegrates into white noise (pun intended) while relatively minor Democratic scandals are amplified -- because there are so few by comparison and therefore each thing is easier to remember individually.

The takeaway for future presidential hopefuls is to flood the zone, as Trump has, whether by design or accident. More is definitely less, in Trump’s case, while less is more for everyone else. This is not only mind-blowingly offensive, it’s morally wrong given that it only serves to reward the worst of the worst -- hence the rise of Trump and his Putin-supported copycats. As a bonus, Republican scandals like McCarthy’s slide under the radar, hidden from sight on Trump’s baggy coattails. If you want to know how the president might avoid impeachment and get re-elected in 2020 despite all the ignominy surrounding him, this is it.