"All gangster money from here on out that's drug money should be used for national security," Ainsley Earhardt said 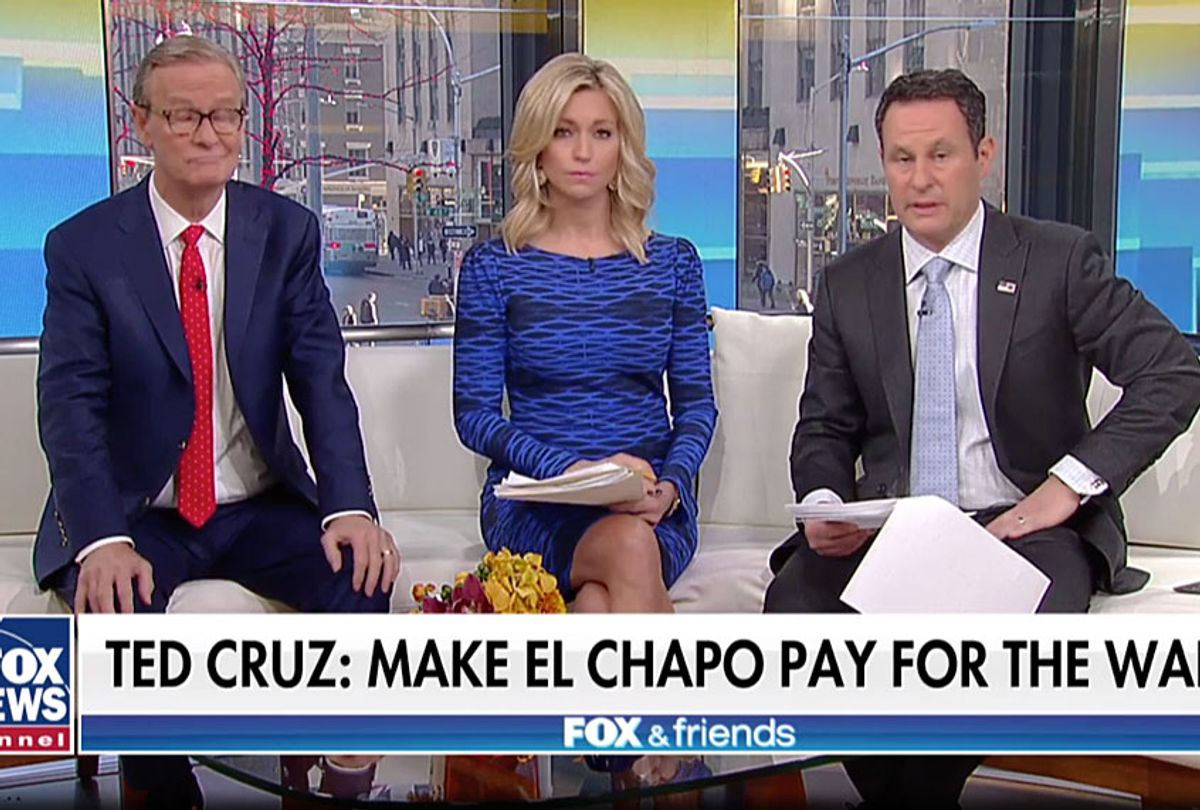 Sen. Ted Cruz, R-TX, this week reintroduced the El Chapo Act, a bill which would allocate forfeitures from the successful prosecution of the notorious Mexican drug lord of the same name to the completion of a wall along the southern U.S. border.

The idea caught traction on President Donald Trump's favorite morning TV show, "Fox & Friends," where the co-hosts remarked in how it would provide the president with a way to fulfill the central promise of his campaign: a $5.7 billion wall along the U.S. border with Mexico.

"When you think about it, the president has said all along – in the beginning, you know, 'We're going to get Mexico to pay for it,' co-host Steve Doocy said Wednesday morning. "This would be an indirect way to make Mexico pay for it."

While Doocy and co-host Ainsley Earhardt thought the idea was not just "good" but "great," their colleague Brian Kilmeade was more hesitant in his praise. "It's not a practical idea, but it's an intriguing one," he chimed in.

"Now, this is not going to go anywhere, because it's not going to get 60 votes in the Senate," Kilmeade said earlier in the segment. "Because nobody wants to give the president a victory, as we've seen witnessed over the last three months." (House Speaker Nancy Pelosi previously said Democrats rejected the idea because "a wall is an immorality.")

Earhardt, for her part, acknowledged that Cruz's idea was dead on arrival.

"Everyone knows it's not going to happen, but it's such an excellent idea," she said. "It's taking drug money and building the wall to prevent more drugs from coming over the border. And he says all gangster money from here on out that's drug money should be used for national security."

The Fox News host appeared to be loosely referencing a defining – and xenophobic – message from the day in 2015 when Trump descended an escalator in Trump Tower in Manhattan to throw his hat into the last presidential race.

Upon announcing the re-introduction of the El Chapo Act on Tuesday, Cruz said the Congress had been given a clear mandate from their constituents: to "secure the border and build the wall."

“Fourteen billion dollars will go a long way to secure our southern border and hinder the illegal flow of drugs, weapons and individuals," the senator claimed in a statement. "By leveraging any criminally forfeited assets of El Chapo and other murderous drug lords, we can offset the cost of securing our border and make meaningful progress toward delivering on the promises made to the American people.”