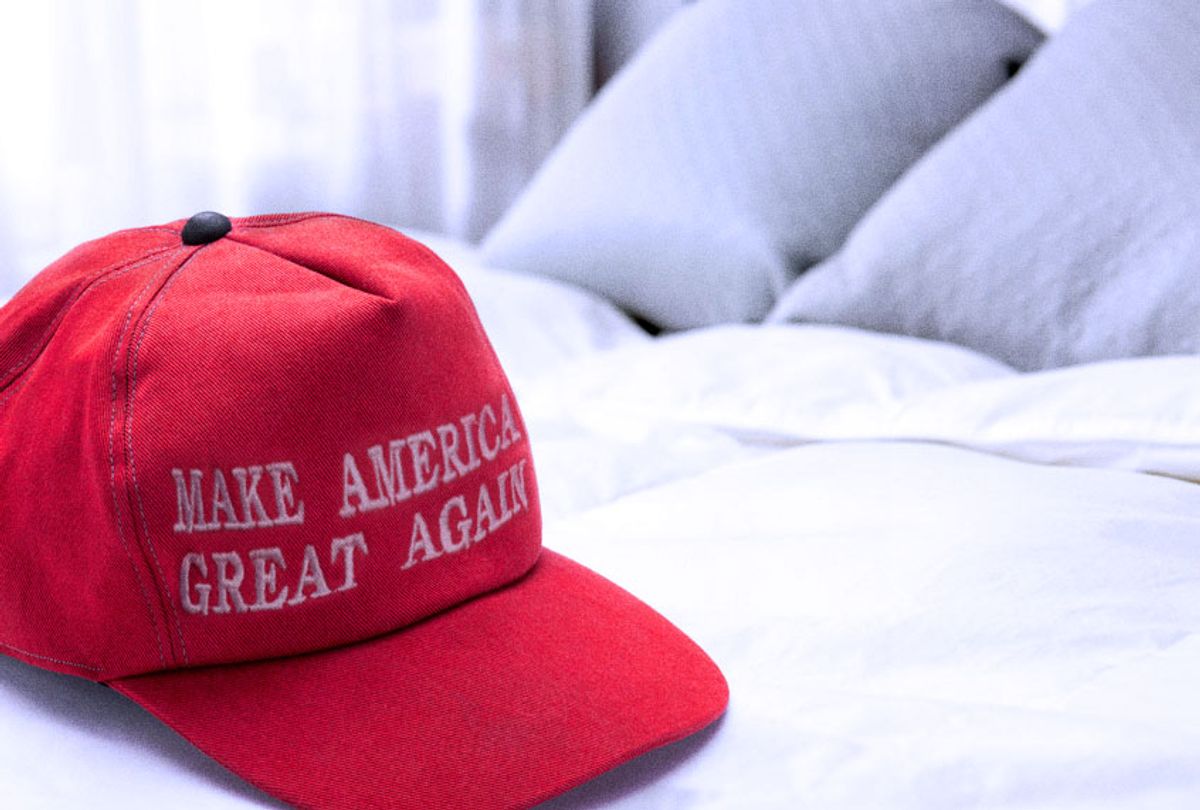 Donald Trump has made America's mental health crisis much worse.

Beginning with his presidential campaign and through to his third year as president, the United States has experienced an increase in anxiety, suicide, depression, and other mental health problems. The president of the United States is also a role model. His or her behavior influences the public. And as documented by Dr. James Gilligan in his book "Why Some Politicians are More Dangerous Than Others," Trump's assault on the country's mental health is part of a much larger pattern: the Republican Party and the conservative movement have, for decades, advanced an agenda which has hurt the overall health and well-being of most Americans.

Donald Trump's negative impact on mental health extends to the intimate sexual lives of many people as well.

What is "Post-Traumatic Trump Disorder"? How does Donald Trump's misogyny and other unhealthy behavior towards women reflect deeper systemic cultural problems in America around gender, sex, and intimacy?

How has the Age of Trump impacted the American people's collective mental health and also their intimate lives?

It has had a big impact. For some people Trump's campaign and presidency has created a type of PTSD — what I call "Post-Trump Sex Disorder." Trump has created feelings of fear, loathing, and nausea. People just don’t want to have sex. This would mainly be seen with women who are just appalled at how creepy Trump is. He takes what is often a positive male attribute of confidence and pushes it way over the line into a rape-like and rape-entitled kind of arrogance.

The news media is part of the problem as well. The news is full of stories about bad sex. They don’t really like to talk about good sex. When you have this media obsession with bad sex with the usual "all American" war worship and racism, as well as economic disparities and the way that corporations are in control, it really sucks the life out of a person. Never mind how this moment with Donald Trump is also reflected by many men who are dysfunctional and chronically frustrated and who don’t know how to properly approach women, and the lethally unhinged "incels." We also cannot forget all of the "ammosexuals" who substitute their favorite guns for a working penis.

Most Americans of conscience, and decent people more generally, are appalled by Donald Trump's personal and public behavior. Yet, there are others who are aroused by Donald Trump and see him as a symbol of sexual potency and power.

Yes, Donald Trump is a turn-off for many people. But for some people they are turned on and titillated by Donald Trump. They are not suffering from Post-Trump Sexual Disorder. Sex does not always turn us on the way we think it ought to. A lot of people are attracted to bad boys. I emphasize "people" because it is both men and women who are aroused and attracted to and titillated by Donald Trump. There is definitely a homoerotic attraction for Trump being experienced by his usually very homophobic male supporters. Both men and women really do find Trump to be an appealing "bad boy" and "evil daddy" who’s really hot.

In this way, Donald Trump is the daddy of a dysfunctional United States family.  And of course evil can be very sexy. Evil is fascinating. As you said previously, Donald Trump is a cult leader and Charlie Manson-like figure. People are just charged up by him and some of those people are driven to commit great crimes by that kind of charisma.

It is almost the same as when you hear about a fetish and you say to yourself, “I don’t understand why anybody would be turned on by that,” but people are.

American society is very repressed in terms of healthy attitudes about sex. Therefore it is no surprise that people will look to violence to express their sexuality. This is why Donald Trump embodies the symbolic cultural role as the "Big Mean Sexy Daddy."

One of the things about the evil daddy is that he shames you. This touches your sexuality very deeply. Trump does this all the time with his attacks on people and efforts to shift the blame from him and on to others.

Donald Trump is beloved by right-wing Christians. They see him as a messiah figure despite his obvious and gross personal behavior — behavior that as viewed by most of the world's "great" religions would be considered wicked and sinful. Moreover, in many of these right-wing Christian churches they have these rituals called "purity balls" where the father "marries" his daughter to "protect" her "virginity." What does this collectively signal about a deeper hypocrisy in red state American around sex?

In total these "purity balls" are a way of establishing ownership over women. It reflects a broader American society which is very anti-sex. This is very old, this idea of utilizing sex for procreation so that daddy can be in control and have grandchildren and pass on his great fortune to his children. That’s the idea of sex in an ownership society, one which is patriarchal and heavily influenced by right-wing Christians.

Why are some men — especially conservatives and other authoritarians — frightened and made angry by strong, independent, sexual confident women?

As human beings we have a range of possible turn-ons and turn-offs. Very often, one person’s turn-on is another person’s turn-off, especially among men.

Many men are aroused by the idea of a woman having power in the bedroom. As a sex therapist I see these men all the time. The numbers are much higher than most would suspect.

We women are a little bit more diffuse and flexible about our turn-ons. As a qualifier I hope I’m not sounding sexist here, because for the most part I believe that men are not from Mars and women are not from Venus. We’re all from this same beautiful wild sexual planet Earth. We’re far more alike than we’re different.

We have a few differences. One of those differences is that men, unless they’re on Viagra or another drug, can see when they are aroused. Women tend to be more exploratory by comparison.

I have talked to so many men in right-wing strongholds, red state America. They need sex therapy more than the guys in liberal parts of the country.

Why is this? Certain communities do not allow these men to step out of a very narrow role of what is defined as being "masculine" and "strong" and "normal." They have a very hard time of even finding a therapist in those places to speak with. Men in these conservative parts of the country may not even be able to find a therapist who than can share something as basic as, “Hey, I really enjoy having a woman spank me.” They’re going to laugh at you. They’re going to call you names. These men will certainly not be able to share with a therapist or anyone else for that matter how they may really enjoy seeing their wives with another man.

It scares them but it also makes their penises hard. It’s such a conundrum for these guys. The penis doesn’t lie, unless it’s on Viagra. I feel that a lot of these white supremacist, "cuck obsessed" "cuckold" name-calling right-wing types really believe that black men are superior to them sexually and physically. This belief and feeling is at the center of their sexual desire which in turn is the center of their true masculinity. It scares them so bad and yet they want to act it out. They want to feel it because they have a natural desire to have an orgasm, to enjoy themselves, to have pleasure.

A lot of these white right-wing men, especially the "alt-right" types, would love to have sex with African-American men. But this could potentially ruin their social and political power if it became publicly known. But the fantasies still exist.

They try to work these fantasies and tensions out somehow. But they have this totally opposite politics and cultural relationship to the world and to their families. I have tried to help people to be a little bit more honest with their true fantasies and desires. But it is a challenge.

Granting that it is unhealthy, does all of this guilt and repressed desire make the sex better in the moment?

I don’t know if it really makes the sex hotter. It  just makes the desire very intense. I tried to help people to come to terms with these things but these contradictions between your value system and your desire are very difficult. I can’t tell you how many clients I have that are torn apart by these tensions. Some of these clients get better. They are more honest with their wives at least and some of them are not.

But then there are the really far gone men and boys and teens. These are the so-called "incels" — which is a subculture known as "involuntary celibates" — who are developing a tremendous resentment towards women and and also towards men who seem to be having some sex. And some of these most extreme "incels" become mass murderers as we have seen in the United States repeatedly during the last few years.

[You wrote about the allegations] that Donald Trump's former adviser and campaign manager Paul Manafort practiced "interracial cuckolding." This is all very revealing given that Manafort worked for Donald Trump — a public figure and now president whose behavior and politics are very racist. Can you explain more about this kink?

What is cuckolding? It’s an old English term that actually derives from the French word “cucu” which is of course the cuckoo bird who lays her eggs in another bird's nest. That bird then raises the eggs.

As unbelievable as it may sound, there are actually slave plantation retreats where black people go to be dominated by white people in a BDSM interracial role-playing experience. There are also other examples of that kink where blacks and Latinos and other nonwhites engage in "race play" with their intimate partners where the former act out "crossing the border" and being captured by the authorities, are servants or slaves who are subjected to racist abuse. Sometimes this takes the form of using racial slurs while having sex. To me these are all clear examples of internalized white supremacy and self-hatred. But I also believe that people have a right to their own pleasure and bodily autonomy with consenting partners. How do we reconcile these tensions?

It is complicated and not a simple issue. I think it can be great therapy. Interracial cuckolding and other types of role-playing can open up the participant’s minds to each other and make them all better people. I really believe that. I also believe that this type of sex can exorcise old demons from your childhood. It can also exorcise old demons from just being an American and this country's history.

I believe in the power of psychodrama and fantasy role-playing. I think when it’s all consensual and there is discussion afterwards and before it can be very valuable. But unfortunately all too often that does not happen.

What advice do you have for people who are experiencing "Post-Trump Sex Disorder"? How can they salvage their intimate lives in a time of such fear, anxiety, violence, and worry?

Pleasure when you’re sharing is the opposite of selfishness. You’re really reaching out to your fellow humans. That’s the beauty of life. I also think it is important to honor pleasure and to honor pleasure givers.

I think that there are so many people who shame each other over our human sexual desires. It’s kind of a favorite American pastime. I think that that contributes to a sex negative culture.