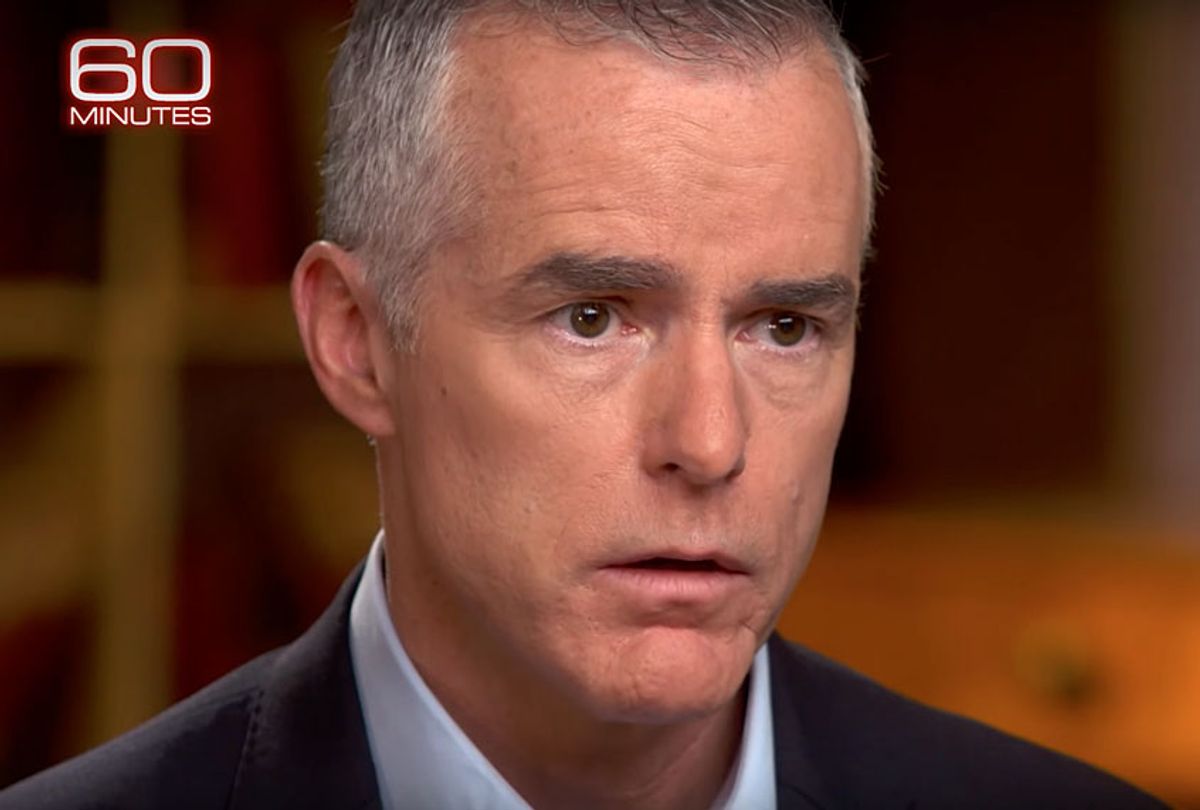 Former acting FBI Director Andrew McCabe has broken his silence about why he ordered an obstruction of justice investigation into President Donald Trump in the days after former FBI Director James Comey's firing.

"I was speaking to the man who had just run for the presidency and won the election for the presidency and who might have done so with the aid of the government of Russia, our most formidable adversary on the world stage," McCabe told CBS News' Scott Pelley in an interview, which will air in full this Sunday on "60 Minutes." "And that was something that troubled me greatly."

One day after Comey's firing and after meeting with Trump in the Oval Office, McCabe, who is currently promoting his forthcoming book, "The Threat: How the FBI Protects America in the Age of Terror and Trump," said he "met with the team investigating the Russia cases."

"And I asked the team to go back and conduct an assessment to determine where are we with these efforts and what steps do we need to take going forward," he said. "I was very concerned that I was able to put the Russia case on absolutely solid ground in an indelible fashion, that were I removed quickly and reassigned or fired – that the case could not be closed or vanish in the night without a trace."

"I wanted to make sure that our case was on solid ground," McCabe continued. "And if somebody came in behind me, and closed it and tried to walk away from it, they would not be able to do that without creating a record of why they'd made that decision."

In a statement to CBS, the White House called McCabe's inquiry "completely baseless." Trump, who has frequently criticized McCabe, responded to the former acting FBI director's interview on Twitter Thursday, calling him a "disgrace" and accusing him of being politically biased during his time at the bureau. The Justice Department said Attorney General Rod Rosenstein "rejects Mr. McCabe's recitation of events as inaccurate and factually incorrect."

According to an excerpt of McCabe's forthcoming book published Thursday in The Atlantic, Trump repeatedly expressed pride in his decision to fire Comey "flew off the handle," complaining to McCabe about a series of grievances against the former FBI director.

McCabe also compared Trump to a mob boss, writing that "the president and his men were trying to work me the way a criminal brigade would operate."

Like Comey, McCabe noted that he wrote memos about his interactions with Trump so he could "have a contemporaneous record of conversations with a person who cannot be trusted."

"Every day brings a new low, with the president exposing himself as a deliberate liar who will say whatever he pleases to get whatever he wants," McCabe wrote. "If he were 'on the box' at Quantico, he would break the machine."

McCabe also confirmed for the first time publicly to "60 Minutes" that there were "meetings at the Justice Department at which it was discussed whether the vice president and a majority of the Cabinet could be brought together to remove the president of the United States under the 25th Amendment."

"These were the eight days from Comey's firing to the point that Robert Mueller was appointed special counsel," he continued. "And the highest levels of American law enforcement were trying to figure out what do with the president."

McCabe also confirmed to Pelley that Deputy Attorney General Rod Rosenstein had considered wearing a wire in meetings with the president without his knowledge. When that information was reported last year, Rosenstein's tenure at the Justice Department was called into question. Rosenstein denied that he raised the possibility of wearing a wire during meetings with Trump — but, according to Pelley, McCabe said the suggestion was raised several times and that he discussed the possibility with FBI lawyers.

McCabe was fired by former Attorney General Jeff Sessions in March, days before his retirement benefits would have set in, following an inspector general report that concluded he had lied to investigators or his boss, former FBI Director James Comey, on four occasions – three of them under oath. McCabe stepped down as deputy director in late January and planned to retire two days before his firing. The Justice Department's watchdog has referred its findings on McCabe to the U.S. Attorney's Office for the District of Columbia for possible criminal charges. The case remains under investigation.

McCabe has disputed many of the report's findings and has said he never meant to mislead anyone. Trump, however, praised Sessions' decision, calling it "a great day for democracy."

"Andrew McCabe FIRED, a great day for the hard working men and women of the FBI," Trump said on Twitter at the time, adding: "Sanctimonious James Comey was his boss and made McCabe look like a choirboy. He knew all about the lies and corruption going on at the highest levels of the FBI!"