For Donald Trump, there's an emergency: Democrats are winning and he's in trouble

There is no "national emergency," and it's not about the wall. Trump is trying to invalidate the 2018 elections 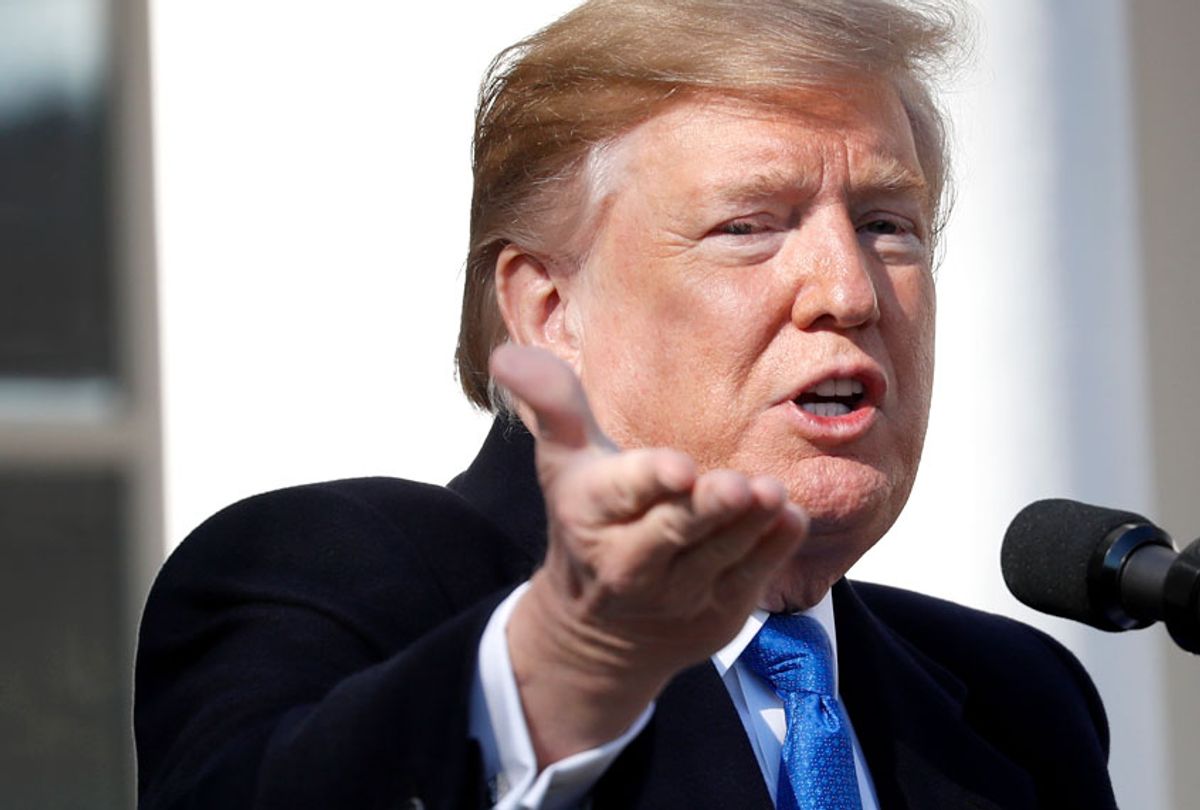 Donald Trump speaks during an event in the Rose Garden at the White House to declare a national emergency in order to build a wall along the southern border, Friday, Feb. 15, 2019 in Washington. (AP/Pablo Martinez Monsivais)
--

Now that President Trump is declaring a national emergency to build a border wall, one question should be on the lips of every journalist, pundit and politician talking about this issue: If this is a real emergency, why did Trump wait more than two years to do anything about it?

The New York Times frames the border wall story as "a two-month war of attrition," but while there's certainly been an escalation of debate in the past few months, that's misleading. In truth, Trump has been making false claims about a dire situation on the border that required a wall for years now. He even kicked off his presidential campaign in 2015 with an infamous racist diatribe painting Mexicans as "rapists" who are "bringing drugs" and "bringing crime." By early 2016, "build the wall" was a chant for the Trump voter base, and he rode this false, racist narrative about immigration and the border all the way to the White House.

After Trump took office in 2017, however, his claims that there was an emergency at the border were immediately belied by his actual behavior. Instead, he spent two years playing golf and tweeting and making no real effort to get the wall built, despite having Republicans in control of both houses of Congress and numerous opportunities to pass measures to fund the wall.

So what changed? Why has it not been an "emergency" for the past two years, but suddenly became one now?

Nothing about the actual situation at the border has changed. It's as peaceful and low-crime as it has been for years, despite Trump's innumerable false statements to the contrary. The number of people crossing the border illegally has been extremely low compared to past decades. Many illegal border crossings now, and perhaps most of them, are a direct result of the Trump administration plugging up the official ports of entry so people with a legal right to seek asylum can't get in. Outside of some dreadful situations created by Trump himself — the family separation policy and capricious or confusing shifts on asylum policy, for instance — the situation at the border has remained the same since Trump got elected.

Sen. Dianne Feinstein, D-Calif., recently pointed this out on Twitter:

Only one thing has changed: Last November, Democrats won a sweeping victory in the midterm elections, gaining 40 House seats and a clear majority. For Donald Trump, that's the real emergency. Friday's declaration isn't really about a border wall. It's about Trump rejecting the validity of the 2018 elections.

Trump spent the past few years praising dictators and sneering at legitimately elected world leaders. I'm sorry to say that wasn't just trolling or idle bluster. He really is opposed to democracy and reacts to losing a free and fair election by seizing more power for himself and trying to undercut or invalidate the electoral process.

The timeline bears this out. Trump had multiple opportunities to pressure Republicans into passing a bill to fund his wall and while he occasionally made gestures towards that goal, he never did anything concrete to make it happen. Here are the highlights:

Trump admitted during his Rose Garden speech on Friday that this isn't really an emergency, saying, "I didn't need to do this."

He immediately followed that up with the baffling and blatantly false statement, “I just want to get it done faster, that’s all."

Clearly, he doesn't. He had two years to get it done with Republicans in power on Capitol Hill, and made no serious efforts to fund the wall. This is all about sticking it to Democrats and to the voters who dared turn out for them in 2018.

There's no reason to believe the wall will ever be built. If the fates are willing, Donald Trump has less than two years left in office. Even beginning a project on that scale will likely take longer than that, especially considering the laziness and incompetence at all levels of his administration, emanating from the top. Even the money he's trying to appropriate from other areas falls far short of the many billions that would be needed to construct his wall. what's needed to build a wall. Any move toward breaking ground will likely result in an explosion of lawsuits that will long outlast Trump's presidency, allowing the next president to simply reverse the emergency declaration and pretend this whole embarrassing incident never happened.

That's a comforting thought for people who live along the border and are worried about a wall destroying the environment and their way of life. But it makes the larger implications of this situation even more worrisome. Trump isn't doing this because he's desperate to achieve a major policy goal. There's no evidence he thinks that will actually happen. He's also not doing this because he sincerely believes there's a national emergency.

He's doing this for one reason only: To subvert democracy and undermine the will of the people.

Trump is no doubt experiencing the Democratic midterm win as a personal emergency, especially since it's a clear sign that he's in real trouble in 2020. As Salon's Heather Digby Parton points out, Trump's also likely in a full-blown panic over the accumulating corruption scandals and emerging evidence of Russian collusion. There's good reason to think Trump and his attorney, Rudy Giuliani, believe that Trump's best (or only) bet for staying out of jail may be re-election. So he's not just worried about keeping his office and preserving his ego. He's worried about preserving his freedom and not dying in federal prison.

It's always important to remember that Trump is a malignant narcissist. He often conflates what's bad for him with what's bad for the nation, as evidenced by his tendency to react to negative press coverage by declaring that journalists are the "enemy of the people" or that judicial rulings he dislikes are "very bad for our country." Since Trump thinks he is the nation, like a hereditary monarch of old — and that nobody matters but himself — it makes sense that he would decide that his personal loss of power  constitutes a national emergency.

That's also why it's impossible to say what this national emergency nonsense means going forward. House Speaker Nancy Pelosi, trying to warn congressional Republicans about allowing Trump to get away with this, argued on Thursday that a "Democratic president can declare emergencies as well" -- perhaps on gun control or climate policy -- and noting that the precedent "is something that should be met with great unease and dismay by the Republicans."

But Republicans may not be too worried about that, and they may be right. We have no idea who the next Democratic president will be, but it's nearly certain the party won't nominate a narcissistic authoritarian who believes it's a national emergency when the opposition party wins some seats in Congress. As such, Republicans likely view the national emergency as a pacifier they're shoving in Trump's mouth, rather than a precedent to be seized by future Democratic presidents.

There's also no good reason to think Republicans, who have spent the past couple of decades trying to gut voting rights and campaign finance laws, are much interested in preserving democracy. If anything, they're tickled to have Trump in office to do their dirty work, while they make sad faces at reporters but refuse to lift a finger to stop him.

Whatever the long-term impacts of this bogus emergency may be, the short-term reality is this: As many people have noted since the campaign, Trump is an authoritarian by nature and an opponent of democracy. The wall is a lengthy project with many legal obstacles that likely won't be hammered out until well after he's out of office. The real issue here is much bigger than that wall: What kind of damage is Trump doing by declaring a national emergency for the sole purpose of invalidating a free and fair election? The answer to that question remains shrouded in terrifying darkness.