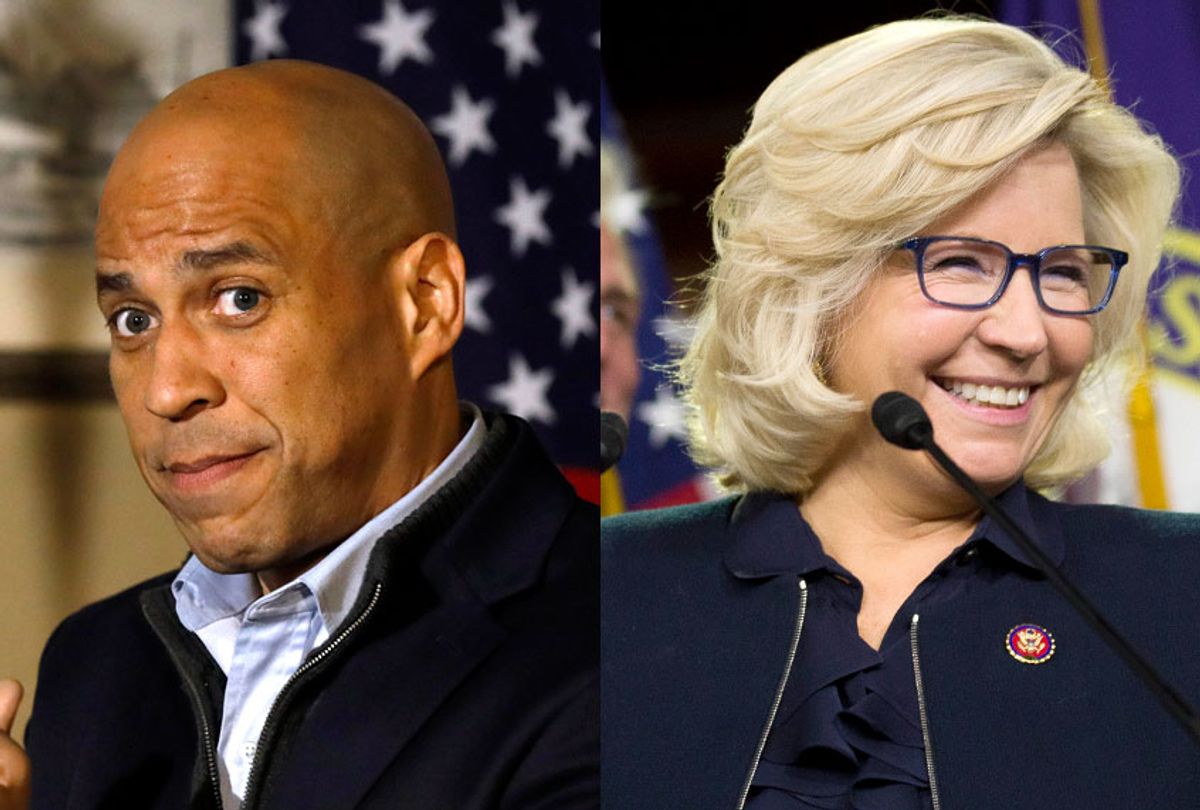 Rep. Liz Cheney, the daughter of former Vice President Dick Cheney and a Republican congresswoman from Wyoming, has taken to Twitter to mock Sen. Cory Booker, D-N.J., for arguing that Americans need to reduce their meat consumption in order to save the planet.

"Hey ⁦@CoryBooker⁩ I support PETA - People Eating Tasty Animals. ⁦@BeefUSA⁩ #WyomingBeefCountry," Cheney wrote in her tweet, which was accompanied by a smiling picture of herself.

Cheney was responding to an interview given by Booker at the publication VegNews.

"You see the planet earth moving towards what is the Standard American Diet," Booker explained. "We’ve seen this massive increase in consumption of meat produced by the industrial animal agriculture industry. The tragic reality is this planet simply can’t sustain billions of people consuming industrially produced animal agriculture because of environmental impact. It’s just not possible, as China, as Africa move toward consuming meat the same way America does because we just don’t have enough land. The number-one reason for rainforest destruction now is animal grazing land."

"We see greenhouse producing gases produced; the devastating impact is just not practical. The numbers just don’t add up. We will destroy our planet unless we start figuring out a better way forward when it comes to our climate change and our environment," Booker argued.

This isn't the first time that Cheney has trolled Democrats and liberals using Twitter as her social media platform.

During President Donald Trump's State of the Union address last week, Cheney took to Twitter to write about "things my Democrat women colleagues wouldn’t clap for at #StateOfTheUnion2019 tonight: America, freedom, free enterprise, law enforcement heroes, record low unemployment for women & minorities, the right of babies to live. Things they did clap for: themselves."

Last month she trolled Democrats visiting Puerto Rico by tweeting a picture of New Jersey Sen. Robert Menendez and writing, "Democrats in Puerto Rico this weekend; partying with cast of Hamilton #Historyhasitseyesonyou." A week before that she took a shot at actor Christian Bale — who said that he channeled the devil in order to play her father in the recent movie "Vice" — by writing, "Satan probably inspired him to do this, too. Christian Bale arrested for 'assault on mother and sister.'"

Cheney has also trolled Democrats during TV appearances. On Sunday she told CNN's Jake Tapper that, in regard to Massachusetts Sen. Elizabeth Warren's falsification of Native American heritage, "I have concerns about somebody like Elizabeth Warren pretending to be a Native American. You're absolutely right, I do represent thousands of Native Americans here in Wyoming, and the notion that anybody of any political party would pretend that they were a member of a tribe or would pretend that they were Native American — and would do it, as she seems to have done it, in order to get benefits — that is in my view the disgrace. She's made herself a laughingstock."

She added, "I wonder whether or not anybody around her is saying it's time to say this just isn't going to work, because I think at this point each time she tries to take one more step to show that she wasn't claiming membership in a tribe or claiming that she wasn't Native American in order to get benefits, we see that it wasn't true."

Last month Cheney also told Fox News that Democrats would not control the House of Representatives past 2020 if they do not support funds for border security.

Whether Cheney realized it or not, Booker is something of a celebrity in PETA circles, with the organization declaring him to be "officially hottest vegetarian senator" in 2013.

"It’s a good thing Washington, D.C., is one of the most vegetarian-friendly cities in the country, because New Jersey just elected Newark mayor and PETA Sexiest Vegetarian Celebrity nominee Cory Booker to the Senate!" PETA writer Michelle Kretzer wrote at the time. "We’re betting that on Cory’s watch, special interests such as big ag are going to have a hard time getting bills pushed through that allow animals to be abused. This is, after all, the mayor who was so moved by the story of a tortured pit bull that he set out to build a state-of-the-art animal shelter in the dog’s honor, rescued a dog during freezing-cold weather, saved another dog who was left outside in a tiny cage in the rain, and ate vegetarian on food stamps for a week."

Kretzer added, "If government officials want to cut the pork, we think they’ve found their man."

Booker's warning about the danger of meat consumption has gained new currency in light of a recent report in the scientific journal Biological Conservation. It estimated that "the current proportion of insect species in decline ... to be twice as high as that of vertebrates, and the pace of local species extinction ... eight times higher. It is evident that we are witnessing the largest [insect] extinction event on Earth since the late Permian and Cretaceous periods."

One of the major factors cited as causing this decline is the rise of big agriculture, which has provided less land for insects to use as their habitats. Other factors included pollution through pesticides and fertilizers, parasites and other diseases and global warming.