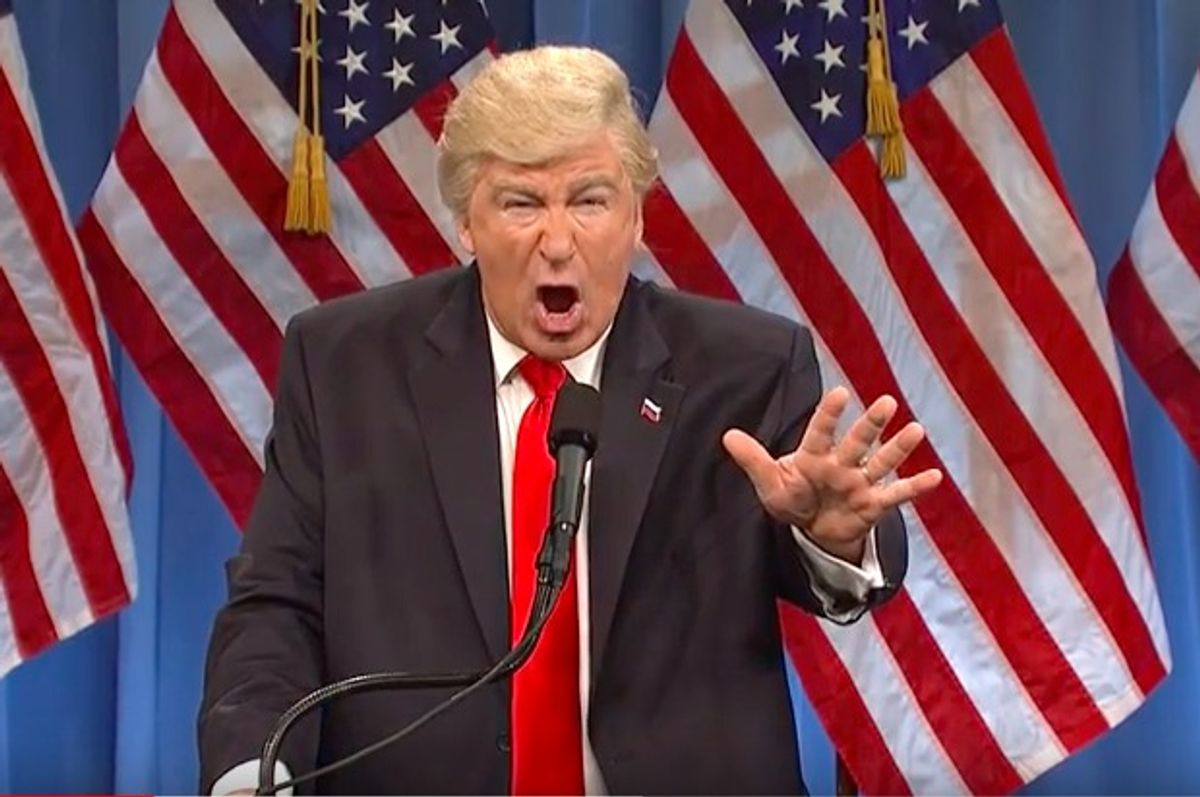 President Donald Trump warned of possible "retribution" against NBC on Sunday after it aired a "Saturday Night Live" sketch mocking his declaration of a national emergency at America's southern border.

"Nothing funny about tired Saturday Night Live on Fake News NBC!" Trump tweeted on Sunday morning. "Question is, how do the Networks get away with these total Republican hit jobs without retribution? Likewise for many other shows? Very unfair and should be looked into. This is the real Collusion!"

During the sketch in question, Alec Baldwin played Trump as a man who openly admits that he is lying about the presence of a national emergency because he wants a border wall to be built between the United States and Mexico.

"You can all see why I gotta fake this national emergency, right? I have to because I want to," Baldwin's Trump declared during the cold open. "It's really simple. We have a problem. Drugs are coming into this country through no wall."

Near the end of the sketch, Baldwin's Trump confessed once again to lying about the presence of a border emergency, telling White House reporters that "in conclusion, this is a total emergency, a five-alarm blaze. Which means I’ve got to go to Mar-a-Lago so I can play some golf."

The truth is actually not far off from the "Saturday Night Live" parody. During a press conference on Friday in which he discussed his declaration of a national emergency, Trump told reporters that "I could do the wall over a longer period of time. I didn't need to do this, but I'd rather do it much faster."

This is the first of a number of occasions when Trump has attacked "Saturday Night Live" for the show's relentless lampooning of his presidency.

"A REAL scandal is the one sided coverage, hour by hour, of networks like NBC & Democrat spin machines like Saturday Night Live. It is all nothing less than unfair news coverage and Dem commercials. Should be tested in courts, can’t be legal? Only defame & belittle! Collusion?" Trump tweeted in December.

"Alec Baldwin, whose dying mediocre career was saved by his terrible impersonation of me on SNL, now says playing me was agony. Alec, it was agony for those who were forced to watch. Bring back Darrell Hammond, funnier and a far greater talent!" the president declared in March.

".@NBCNews is bad but Saturday Night Live is the worst of NBC. Not funny, cast is terrible, always a complete hit job. Really bad television!" Trump posted in January 2017, only days before taking office.

"I watched parts of @nbcsnl Saturday Night Live last night. It is a totally one-sided, biased show - nothing funny at all. Equal time for us?" Trump wrote in November 2016, less than two weeks after being elected.

"Well I hosted SNL when it was a good show. It's not a good show anymore. First of all, nothing to do with me, there's nothing funny about it. The skits are terrible," Trump griped to Lauer. He later attacked Baldwin specifically, claiming that "I like Alec but his imitation of me is really mean-spirited and not very good. I don't think it's good. And I do like him, I like him as an actor. But I don't think his imitation of me gets me at all and it's meant to be very mean-spirited, which is very biased."

He added, "Frankly, the way the show is going now and you look at the kind of work they're doing, who knows how long that show's going to be on? It's a terrible show."