Elizabeth Warren's childcare plan would save lives, save money, and help women get closer to economic equality 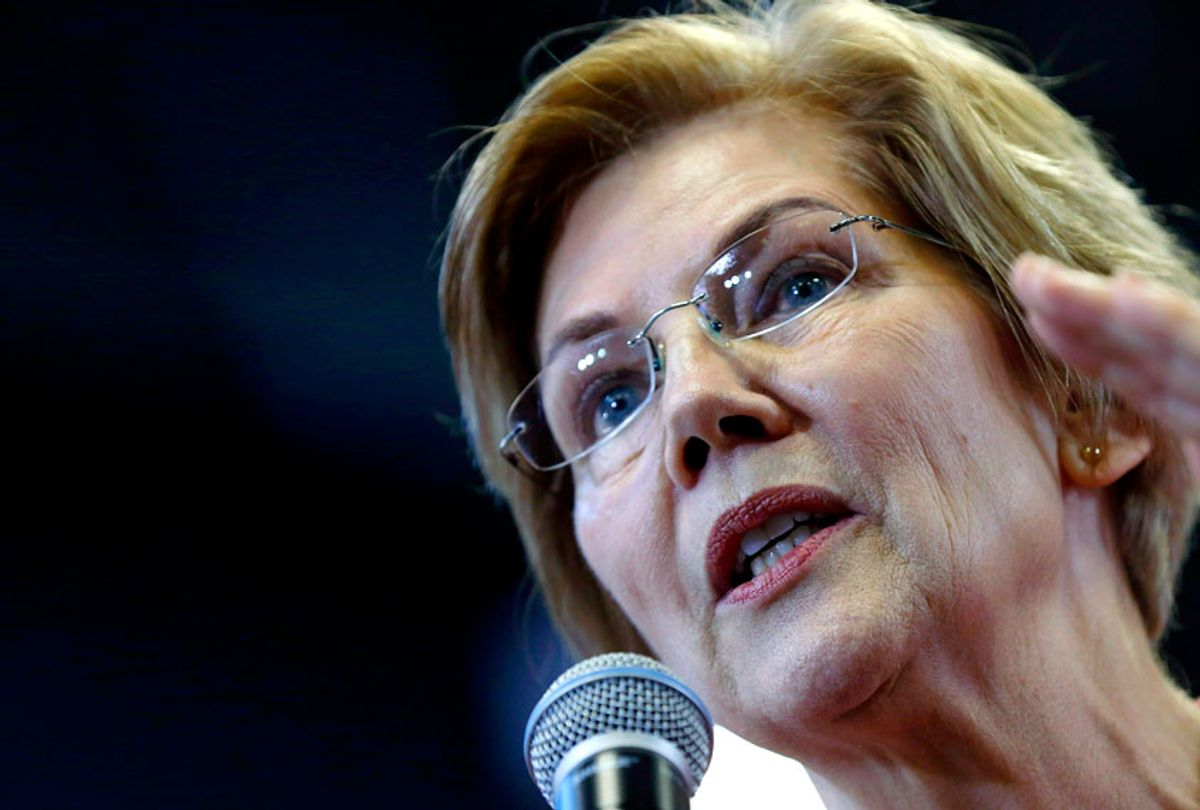 In a move that will escalate the stakes of the 2020 Democratic primary race, Sen. Elizabeth Warren unveiled a policy proposal that could, in enacted, do more to address systematic inequalities than any of the other big ticket policy proposals Democratic presidential candidates are rolling out, such a free college or Medicare for All.

On Monday, the Massachusetts senator announced a plan for universal, affordable child care  until kindergarten that would be available to all Americans, regardless of income level. The plan would cap the amount any family would pay at 7 percent of their income and cost nothing for families at twice the poverty line rate,  meaning free to families of four that makes less than $50,000 a year. The funding would come from Warren's "wealth tax" plan aimed at reducing economic inequalities.

Child care is not a sexy issue, particularly in a male-dominated media landscape, but the blunt reality is Warren's proposal would have longer-lasting benefits than most of the marquee progressive policy ideas — including single-payer health care. Not only would her plan address an immediate economic need, but it would ameliorate economic inequalities in the long term, both among the economic classes and between women and men.

It's the latter that will likely draw the most ire from right wing pundits, who will exploit anxiety about changing gender roles in order to poison the well against a policy that would help Americans of every stripe. But the fact that women have growing political power could also help boost the popularity of Warren's proposal.

First and foremost, affordable childcare is critical to fixing the gender income inequality. Research suggests by far the biggest contributor to the gender pay gap is what has been deemed the "motherhood penalty."  Childless, unmarried women make about 96 cents for a man's dollar, but once women become mothers, they fall behind, making only 76 cents to a man's dollar. (Men who become fathers, meanwhile, on average see their salaries rise.)

A lot of this discrepancy is no doubt due to discrimination, with employers viewing mothers as people who are inherently less committed to their jobs. But the grim reality is that childcare costs a fortune and when the costs become too high, women are often the ones who are expected to scale back at work or even quit their jobs to raise children.

"Lack of stable, affordable child care is one of the reasons women’s work force participation has stalled despite women’s increased education and the growth of fields where many women work, such as health care," Katha Pollitt wrote in a recent New York Times op-ed arguing for a policy proposal just like Warren's.

Even if women fully re-commit to work after their kids start school, the years lost to childcare demands put them behind their colleagues who, by dint of being male or childless, were able to get ahead at work.

Warren's price tag, $70 billion a year, costs much less than other major policy proposals, but it would pay off enormously. The higher income for women and savings for families would allow people to save more for college and retirement. And it would help families that are just starting out, giving them a boost when they are young and most in need of it.

While other candidates, such as Bernie Sanders, have made similar proposals, they haven't  made childcare a front burner issue. There's good reason, however, to think Warren will prioritize childcare more than other candidates. Warren, after all, literally wrote not just a book, but the book — 2004's "The Two-Income Trap" — chronicling how child-rearing has become far more of a financial burden than it used to be. And a big part of the reason why is that spiraling child care costs are eating up a lot of the income brought in with both parents work.

Some folks — mostly conservatives, but also some natalist lefties — think the solution to that problem is to return to the housewifery system, where women are simply expected to stay at home with children instead of work. But that solution isn't just damaging to women who have grand career ambitions. Economic dependence on men leaves women vulnerable to male violence or abandonment, or even just traps them in unhappy marriages. Conservatives might be fine with that, but progressives should not be.

In addition to these enormous benefits to family finances and women's equality, Warren's plan would do a great deal to improve the day care system itself, to the benefit of both workers and children. Right now, childcare workers are often underpaid and many are working under the radar, which is a system that's bad for workers and unsafe for children.  Ideally, a universal system would allow those workers, who are mostly women, to get accreditation and better-paying jobs at federally subsidized day cares that are regulated and safer for both them and the children.

Warren's blog post announcing this centralizes this concern, relaying a story of how, when she was a young mother, she "picked up [her] son Alex from daycare and found that he had been left in a dirty diaper for who knows how long," forcing her into a situation where her elderly aunt moved in with her to care for her children.

Warren's experience is sadly just a hint of how bad things can get. As Jonathan Cohn wrote in his 2013 New Republic expose of American day care, "the overall quality is wildly uneven and barely monitored, and at the lower end, it’s Dickensian."

Part of the problem is childcare workers don't make very much money. The Bureau of Labor Statistics puts the average salary at $22,290 a year, which is a little over $10 an hour. That number doesn't take into account childcare is being offered under the table by women who run unregulated babysitting services out of their homes.

Warren would make the kind of well-paid, quality child care only 10 percent of Americans currently enjoy available to more, and ideally all Americans. This wouldn't just promote "cognitive skills, attentiveness, motivation, sociability, and self-control ," as Warren writes in her announcement. It would flat-out keep children safer.

In December, the Austin American-Statesmen published an investigative article chronicling how, since 2007, inadequate childcare services have led "hundreds of children with serious injuries and nearly 90 dead as a result of abuse or neglect" in the state of Texas alone. The newspaper found over 450 cases of sexual molestation, as well.

These alarming statistics were a direct result of both poor state regulation of registered day care centers and the sheer number of illegal day care centers that have cropped up in response to the lack of safe, affordable options for parents. Warren's plan would do a great deal to fix both problems.

The current childcare system, where desperate parents are often forced to either pay way more than they can afford for quality care or resort to under- or un-regulated providers that are a danger to their children, simply isn't working. It's not working for parents, it's not working for family finances, and it's not working for children. The only reason it's gotten so bad is that our society is still incredibly sexist and unwilling to invest in women or to value any work, like childcare, deemed "women's work".

But the past couple of years have created a dramatic shift, comparable to the second wave of feminism, in attention to these issues. The Women's March ushered in the return of the kind of radical feminism needed to create major social change. Teacher's strikes around the country, which have been broadly popular, have put the importance of both childcare and women's work at the center of the political discourse. The time to strike is now. Whether Warren wins the nomination or not, here's hoping the Democrats make childcare a major priority in 2020.