Fox News host Tucker Carlson: "It's untrue that the darker you are, the more oppressed you are" 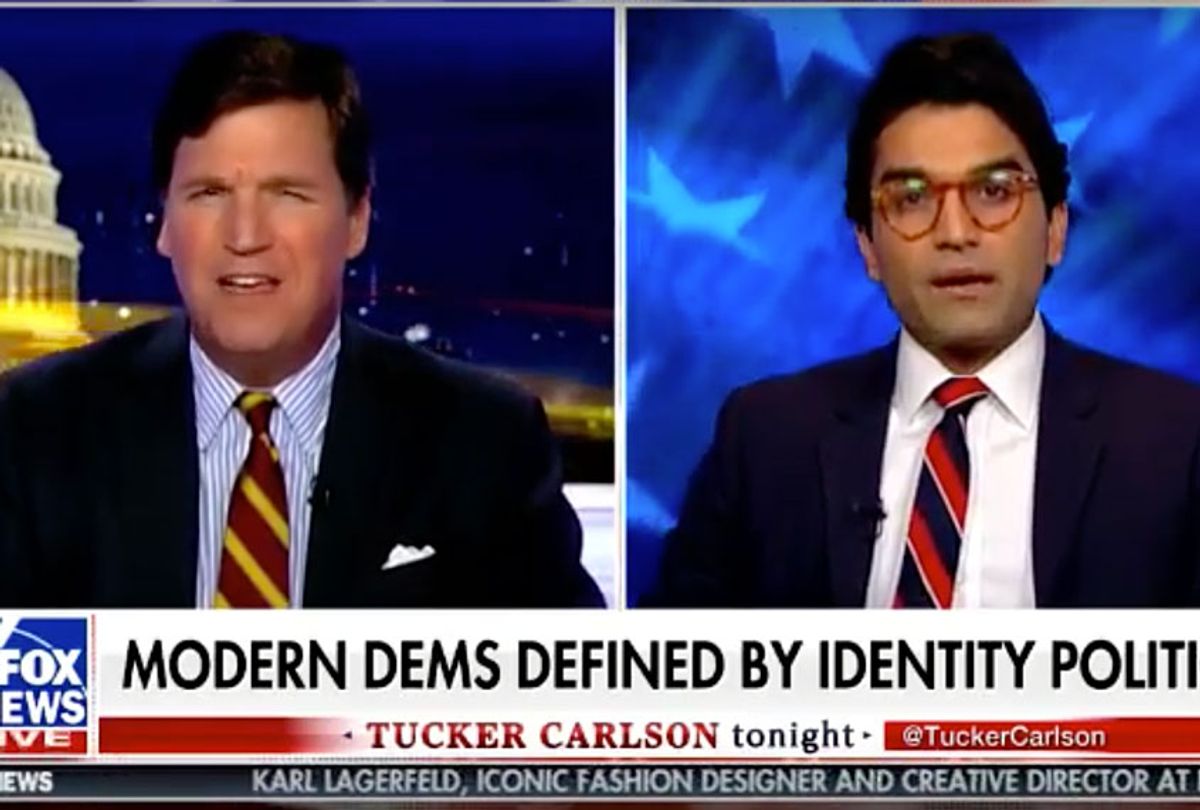 "I think the current occupant of the White House is an embarrassment to our country," Sanders told Bob Kinzel of Vermont Public Radio on Tuesday morning. "I think he is a pathological liar . . . I also think he is a racist, a sexist, a homophobe, a xenophobe, somebody who is gaining cheap political points by trying to pick on minorities – often undocumented immigrants."

Later that evening, Carlson asked his guest the following about the self-described democratic socialist: "Why is there no room in the Democratic Party for someone to just make a straightforward economic case?"

"You cannot talk about economic inequality in the country without talking about racial and economic disparity because of the systems we have built and the legacy of slavery and Jim Crow and internment and all of those things," Patel explained. "What he is saying, basically, is that things like race and inequality are inextricably intertwined based on institutions we have built and the legacies of them."

Tucker, in response, told Patel that he was "confusing" him because, the Fox News host claimed, "the richest people in America are not white people" but rather "immigrant groups," particularly "Indian immigrants."

"A Nigerian immigrant makes more than the average white American, so it's a lot more complicated," Carlson added. "And I'm not sure what that means, but I know what you said is totally false."

"It is very complicated, but the fact of the matter is that you are by and large, statistically speaking, the darker you are in this country, the poorer you are," Patel responded.

"Hold on. But hold on, that's not true," Tucker pushed back. "Slow down. That's not true. It is so much more complicated than that – that what you are saying is a lie. And so Asian immigrants, for example, have the highest educational attainment level and highest incomes of any group in America, OK?"

Carlson agreed with Patel that the issue is "super complicated," but claimed that Patel and other Democrats are "painting a picture of racial division that isn't backed up by the facts."

Patel objected to Carlson's claim, noting that the criminal justice system creates "significantly unequal outcomes for people based on their color or background." Black people in particular, Patel added, are "given stronger sentences, surveilled more often and policed more often. And that puts them in a cycle of poverty, at times, that you can't get another job."

While Carlson agreed that there was "some truth" to Patel's assertion, he criticized his argument that "the darker you are, the more oppressed you are."

"In fact, most people in America are white, as you know. The poorest state is the whitest state: West Virginia. So let's stop lying," Carlson said. "I'm not making a case for any racial group. I'm making a case for non-racial approach to policy – and the only one we can have without wrecking the country."

"Bernie Sanders in 2016 never mentioned color," Carlson continued before another back-and-forth between the pair.

This is not the first time Carlson has made racially-charged comments on his Fox News show. The host has asserted to widespread criticism that diversity is not America's strength, and he also claimed that the leaders of the Democratic Party are "telling Americans they must hate their neighbors for the color of their skin."

"No election is worth the hatred and the division of identity politics — not if you plan to live here, anyway."