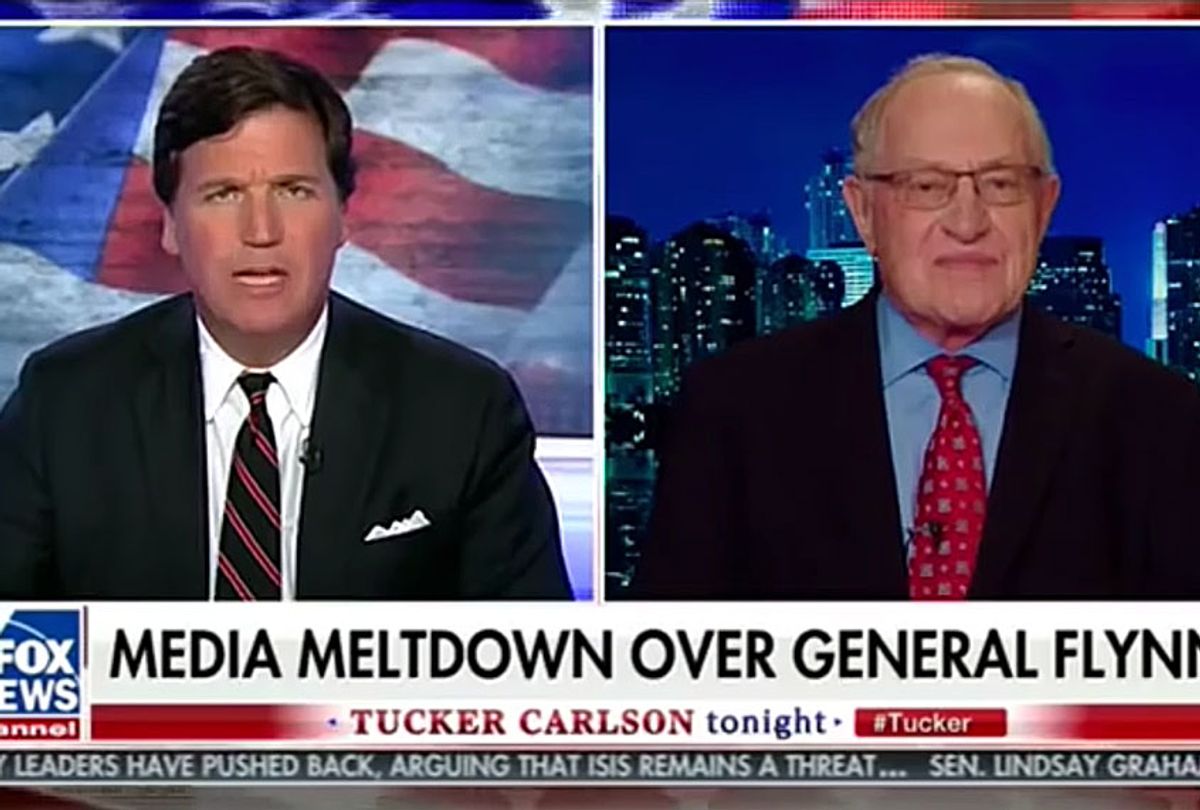 Famed attorney and constitutional scholar Alan Dershowitz, who is a frequent defender of President Donald Trump,  called out Fox News host Tucker Carlson about the racist remarks about immigartion that he recently doubled down on — specifically, that immigration makes the U.S. "poorer and dirtier."

The "Tucker Carlson Tonight" host invited Dershowitz on his primetime show to discuss the latest developments in the case of Michael Flynn, the retired U.S. Army lieutenant general who served as Trump's national security adviser for just 21 days and is awaiting sentencing for lying to the FBI about his communications with Russian officials as part of special counsel Robert Mueller's ongoing probe into foreign interference in the 2016 presidential election.

Dershowitz, however, wasted no time in addressing Carlson's racist rhetoric, which reportedly caused at least 16 companies to pull advertising for his show in response.

"I hate boycotts and attempts to censor free speech. I'm in favor of complete dialogue, but as such, I feel compelled to tell you that I, with due respect, disagree with the way you categorize mass immigration," Dershowitz said. "That's all. I just want to say that."

Carlson, who seemed surprised by Dershowitz remark, thanked his guest for his "willingness to say what you think is right in public and to defend your views, to have a conversation and to let others decide which side is right."

"That's something that I wish we were able to do a lot more of," Carlson added, "but you're one of the only liberals who will come on this show."

Dershowitz then thanked Carlson for allowing him to come on his show to "say what I think" and to publicly disagree with him.

"I wish you hadn't used that language," Dershowitz added, circling back to his earlier criticism. "Language like that was used to describe my grandparents and great-grandparents – and probably some of yours. So let's move on."

Earlier this week, Carlson doubled down on his bigoted remarks from last week about the migrant caravan, claiming that liberal talking points were encouraging undocumented immigrants to flood into the country.

"It's true," Carlson told viewers Monday. "The left says we have a moral obligation to admit the world's poor – even if it makes our own country more like Tijuana is now, which is to say poorer and dirtier and more divided."

He then referenced interviews he conducted with Tijuana delegate Genaro Lopez about the caravan of migrants traveling from Central America to the U.S. that President Donald Trump has labeled a "national emergency."

He also criticized the companies like the jobs website Indeed and the insurance provider Pacific Life, which in recent days have yanked their ad dollars from his program.