In the past year, Silicon Valley became even more dystopian, unequal: report

Sexual assault rose, women suffered, residents fled, and poverty increased — but if you're rich, the news is good 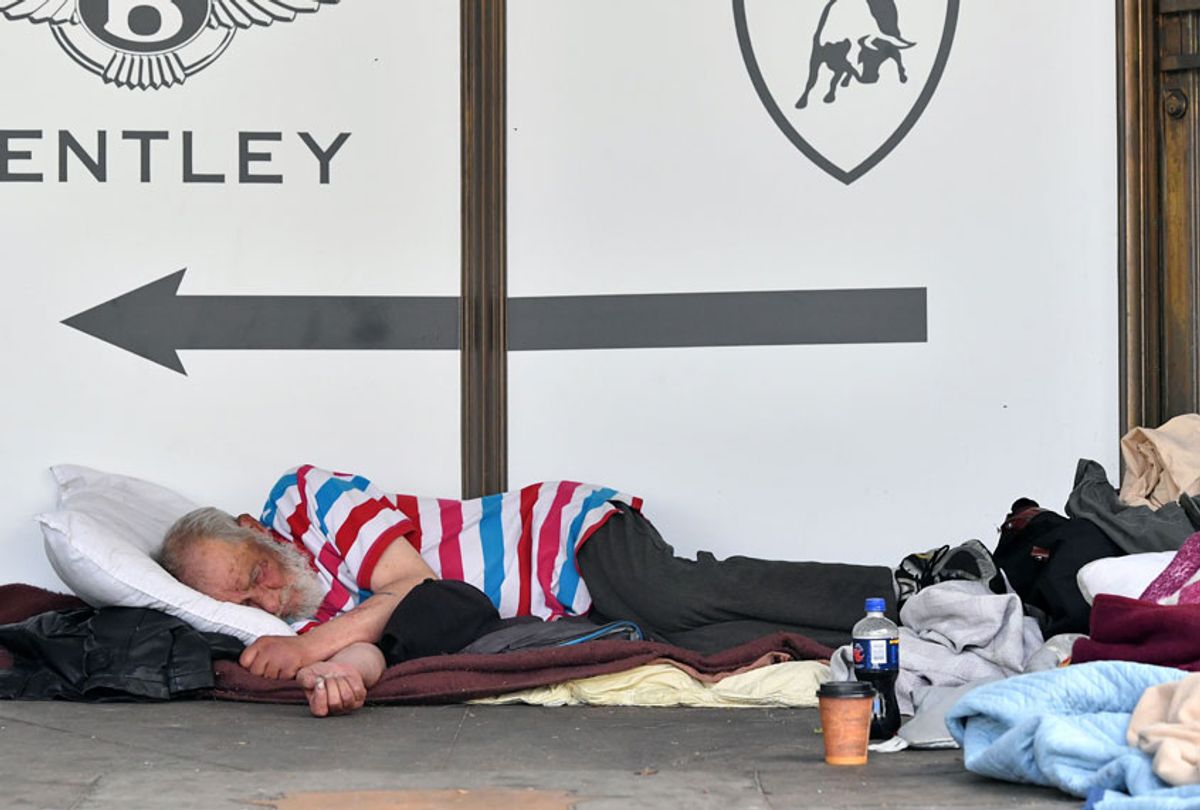 A homeless man sleeps in front of a luxury auto dealership in San Francisco, California on June, 10, 2016. (Getty/Josh Edelson)
--

The Economist claims that life in Silicon Valley is often described as “like living in Florence in the Renaissance.” If this is the case, then why are its residents fleeing?

According to the 2019 Silicon Valley Index, an annual demography report published by a regional think tank, more people are fleeing the tech-spurred “Renaissance” than coming into it — and that is just one data point in an overall grim synopsis of the current state of Silicon Valley presented by the annual report.

Since 1995, the Silicon Valley Index has been telling “the Silicon Valley story,” according to the report’s authors at Joint Venture Silicon Valley, the think tank that publishes the report.  Russell Hancock, president and chief executive officer of Joint Venture Silicon Valley, states that this year’s analysis is “something of a Rorschach test,” a reference to a psychological test in which a subject's varying perception of inkblots are analyzed using psychological interpretation. In other words, the news from the Bay Area might be good if you are rich, and bad if you are not. For those living in Silicon Valley — which the report defines as Santa Clara County, San Mateo County, and parts of Alameda and Santa Cruz counties — the story told this year is one of extreme wealth and extreme poverty.

The report cheers for record-breaking industry industry wins. Venture capitalists generated $50 billion. Silicon Valley gained 35,558 new workers between June 2017 and June 2018. The report states that unemployment levels were so low that Silicon Valley “is effectively at full employment.” However, those jobs are not necessarily going to women, specifically women of color. For women working in the industry, the income gap between them and their male peers has only widened, too.

In 2018, the average annual earnings for a household in Silicon Valley reached $140,000. (For context, the state of California’s average annual earnings for a household were  $81,000; the figure for the United States it is $68,000.) The number of high-income households, those earning more than $150,000 a year, increased in Silicon Valley and San Francisco by 35 percent over the last four years. However, in San Francisco, an estimated two-thirds of families of four get by on less than the city’s six-figure “low-income” threshold. In Silicon Valley, the Index reports that men with a bachelor’s degree or higher earn on average  $145,100 a year which is an estimated 43 percent higher than women with the same level of education.

At Silicon Valley’s biggest companies, such as Apple, Google, Cisco, and Facebook, the gender gap remains, too. Twenty percent of the workforce at Silicon Valley’s 10 largest companies is women, and only 19 percent of technical roles and leadership positions are held by women.  Women who do work in Silicon Valley tend to have children later in life when compared to the rest of California and the nation, and have fewer children overall. The study notes that in 2015, a quarter of all pregnant women in the Bay Area had incomes below the federal poverty guideline at the time. The rising cost of childcare is likely to place women with children under the poverty line, too, as the cost of childcare has increased by 52 percent since 2012. To add the bleakness that Silicon Valley epitomizes for women, the number of reported rapes increased by 25 percent in 2017 from 2016.

On top of all of this and the overall increased cost of living, people are leaving Silicon Valley. Silicon Valley’s counties experienced the most outflow activity in all of the state, the study explains. “Our residents are leaving for the greater Sacramento region, San Joaquin County, Austin, and Seattle,” authors state, noting that population growth has slowed over the last three years  in Santa Clara and San Mateo Counties, reaching a 13-year low. “Population growth has not been this slow since the years following the dot.com bust, which were marked by a significant net outflow of more than 124,000 residents.”

So, where does any good news — if any — figure in all this? According to the report, mergers & acquisitions (M&A) deals totaled to be more than $170 million in only a quarter of the deals that disclosed their amounts. “There were dozens of additional acquisitions by Silicon Valley’s largest tech companies (including Apple, Google, Facebook, Microsoft, and Adobe),” the report states. “These acquisitions have taken innovation out of public view, and play a role in the four-year decline in early stage funding deals to startup.”